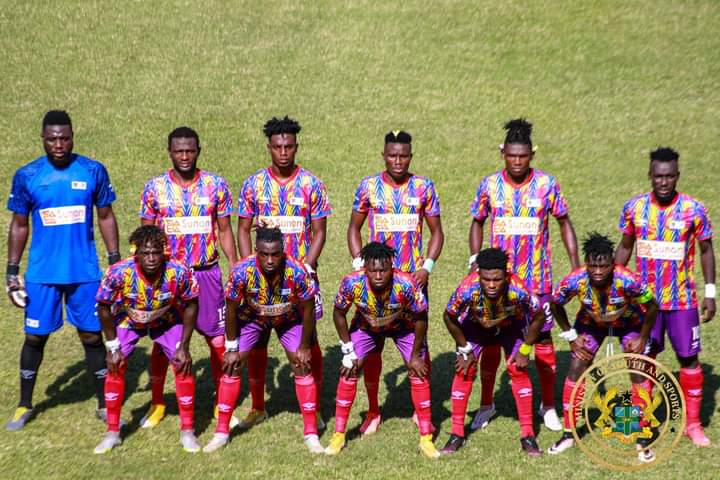 Hearts of Oak recorded a victory over Moroccan champions Wydad AC to gain advantage in their CAF Champions League tie on Sunday.

The Phobians pipped the Wydadis 1-0 in the first leg of the First Round of the Champions League at the Accra Sports Stadium.

Isaac Mensah's solitary strike in the first half was enough for the Rainbow club to claim the win.

Kofi Kordzi who opened the scoring when Hearts beat Guinean side CI Kamsar in the Preliminary round was handed a starting place.

Emmanuel Nettey also took the place of Caleb Amankwah in midfield from the last game.

The Moroccans came close to getting the opener but Hearts goalkeeper Richard Attah made sumptuous effort to save the situation in the early stages of the match.

Wydad came close again as an attempt by Zouhair El Moutaradji was once again saved by Attah.

The Phobian had their moment in the 36th minute after a through ball got to Daniel Afriyie Barnieh who had only the goalkeeper Ahmed Reda Tagnaouti to beat but failed.

Barnieh was brought down by the goalkeeper which looked like a penalty but the referee waved on.

Hearts finally got the breakthrough four minutes from the break when Mensah beautifully slotted home an excellent cross from Salifu Ibrahim from the left.

The Phobians failed to make good use of the scoring opportunities that came their way in the second half of the encounter.

Wydad will take on Hearts at the Mohamed V Stadium in Casablanca in the 2nd Leg next week and the winner will progress to the group stages.

The group stages will start in February 2022 after the Africa Cup of Nations.