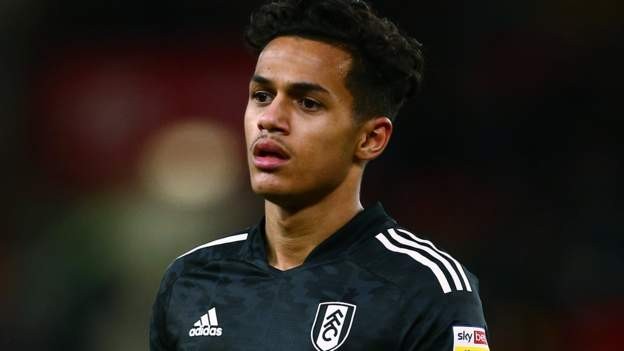 Fabio Carvalho has scored seven goals for Fulham this season

Fulham winger Fabio Carvalho will not leave the club before the end of the current transfer window, head coach Marco Silva said.

The 19-year-old has been a first-team regular for the Championship leaders this season, scoring seven goals.

Carvalho's contract expires in the summer and he has been linked with a move away.

But Silva said the club were doing all they could to extend the England youngster's stay with his boyhood club.

"It's completely out of our plans for Fabio to leave the club in this window, completely out," he said, ahead of Fulham's Championship match at home to Blackpool on Saturday.

"The most important players we have in our squad and the others that are behind, working hard to play and waiting for their chance, they will be with us until the end of the season and Fabio is one of them."

Fulham go into the match against Blackpool five points clear at the top of the table, with a game in hand on second-placed Blackburn Rovers.

They have won their past four league games and scored 22 goals in that time.

Aleksandar Mitrovic and Harry Wilson are available but Kenny Tete will miss the game through injury.

Jean Michael Seri is not yet back in the country after Ivory Coast's Africa Cup of Nations defeat on penalties to Egypt on Wednesday.

Blackpool inflicted the Cottagers' first defeat of the season at Bloomfield Road in September, courtesy of a Josh Bowler strike, and Silva is expecting another tough test.

One area he is looking for improvements is in defence. Despite being in free-scoring form, with 73 league goals scored so far, they have registered two clean sheets in their past nine Championship games.

"The room to improve is really big for us and we should improve," he said.

"Of course I would like to see our team keeping clean sheets and keep winning football matches."