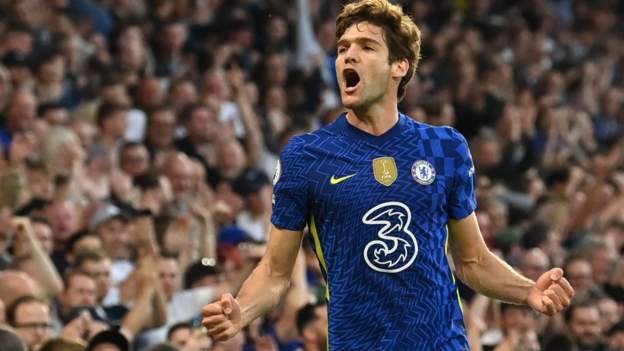 Chelsea all but secured a third-place finish in the Premier League with a draw against Leicester at Stamford Bridge.

The Blues, beaten in the FA Cup final by Liverpool at the weekend, fell behind early on when James Maddison curled a fine effort beyond goalkeeper Edouard Mendy.

However, Marcos Alonso equalised towards the end of the first half when he was picked out superbly by Reece James and volleyed in.

Chelsea dominated the second half and had numerous chances to take all three points.

Hakim Ziyech went close with a free kick while Romelu Lukaku - who had been largely quiet - headed wide.

But Christian Pulisic failed to convert the best chance for a winner when he sliced wide from eight yards with the goal at his mercy.

The result means Chelsea stay third, three points ahead of Tottenham, but with a vastly superior goal difference.

Thomas Tuchel's side finish the season at home to relegated Watford on Sunday (16:00 BST) while Leicester, who are ninth, will look cement a top-10 finish when they host Southampton at the same time.

Chelsea look to the future as season draws to a close

Any jeopardy for Chelsea in this game disappeared on Monday, when their place in the top four was confirmed by Arsenal's defeat at Newcastle.

But with back-to-back home fixtures to finish the campaign, the Blues had a chance to end on a high before switching focus to the future - and the pressing issue of getting the club's ownership sorted.

Initially, Chelsea were sluggish, a possible hangover from their FA Cup loss, but they improved as the game wore on and were unfortunate not to take all three points.

That they didn't win was down to their inability to finish chances, a problem that has plagued them this season.

It has been an incredible campaign for Maddison, named Leicester's player of the season earlier this week, and enjoying his best Premier League goal return in a season, taking his tally to 11 with his striker at Stamford Bridge.

The midfielder had a spell out of the team in the early months of the campaign when he admitted he was struggling for confidence but has not looked back since returning.

In total, he has scored 17 goals in all competitions, chipping in with 11 assists, which surely will not have gone unnoticed by England boss Gareth Southgate as he plans his squad for the World Cup in Qatar later this year.

Ayoze Pérez (Leicester City) wins a free kick in the defensive half.

Attempt blocked. Reece James (Chelsea) right footed shot from the centre of the box is blocked. Assisted by Ruben Loftus-Cheek.

Édouard Mendy (Chelsea) wins a free kick in the defensive half.

Jorginho (Chelsea) is shown the yellow card for a bad foul.

Attempt saved. Trevoh Chalobah (Chelsea) header from very close range is saved in the top centre of the goal. Assisted by Marcos Alonso with a cross.