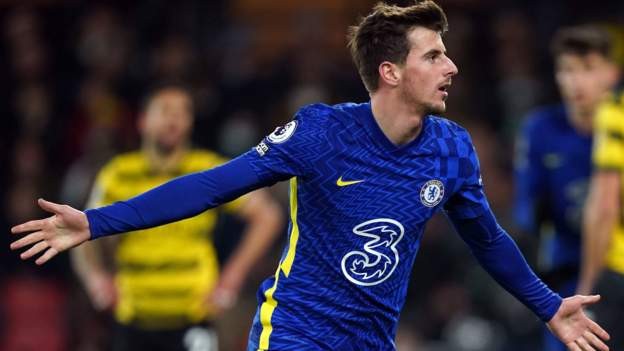 Chelsea retained their place at the top of the Premier League with a hard-earned win over Watford in a game that was halted for 32 minutes because of a medical emergency in the crowd.

Both sets of players left the pitch early in the first half while the fan, who had suffered cardiac arrest, was stabilised.

When they returned, Mason Mount gave the Blues the lead with a first-time finish at the end of a lovely move involving Marcos Alonso and Kai Havertz.

Watford equalised when Ruben Loftus-Cheek lost possession and Moussa Sissoko set up Emmanuel Dennis, who scored with a shot that deflected off Antonio Rudiger.

But having scored his side's first, Mount then set up the winner by providing the pass for substitute Hakim Ziyech to fire past Daniel Bachmann.

With Manchester City and Liverpool both winning, Chelsea's fifth straight away win meant they maintained their one-point lead at the top.

Reaction from Watford v Chelsea, plus the rest of Wednesday's Premier League gamesMedical emergency in the crowd stops Watford-Chelsea game

In a bruising contest which featured seven yellow cards, Chelsea were a long way from their best.

But Thomas Tuchel's side found a way to secure a hard-fought three points and maintain their advantage at the summit.

Even before the game was stopped in the 12th minute, Watford twice went close. But then Mount - who had earlier hit the post - swept the visitors into the lead.

Dennis' fourth goal in five league games arrived shortly before half-time to lift the hosts, and it could have been even better for them.

Tom Cleverley found himself in a one-on-one with Edouard Mendy but slipped at the crucial moment after the Chelsea keeper came rushing out of his box.

It proved a costly miss as Ziyech, sent on after Trevoh Chalobah was injured, condemned Claudio Ranieri's side to a sixth defeat in eight league games.

Chelsea were disjointed for long periods after Tuchel made six changes to the side that started the 1-1 draw with Manchester United on Sunday, yet this could prove a vital three points.

Ruben Loftus-Cheek (Chelsea) wins a free kick in the defensive half.

Attempt saved. Juraj Kucka (Watford) right footed shot from outside the box is saved in the top centre of the goal.

Emmanuel Dennis (Watford) wins a free kick in the attacking half.

Ruben Loftus-Cheek (Chelsea) wins a free kick in the defensive half.

Danny Rose (Watford) is shown the yellow card for a bad foul.