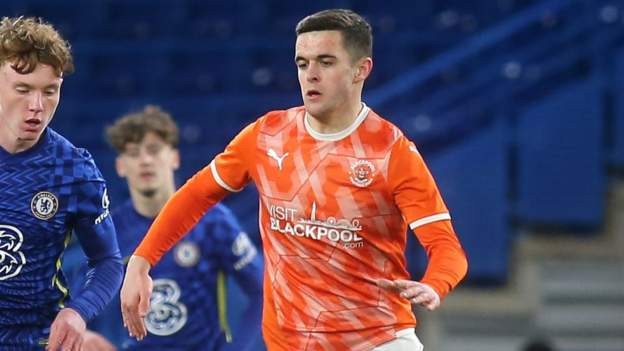 Blackpool's Jake Daniels said his decision to come out as the UK's only openly gay active male professional footballer was "a massive relief".

Daniels, a forward with the Championship club, is the first professional footballer in the UK men's game for more than 30 years to come out while still playing.

Speaking to Sky Sports, the 17-year-old said: "Now is the right time to do it.

"I feel like I am ready to tell people my story."

He added: "Since I've come out to my family, my club and my team-mates, that period of overthinking everything and the stress it created has gone. It was impacting my mental health. Now I am just confident and happy to be myself finally.

"I have been thinking for a long time about how I want to do it, when I want to do it. I know now is the time. I am ready to be myself, be free and be confident with it all."

Justin Fashanu was the last active men's professional footballer in the UK to come out during his playing career, featuring for clubs in England and Scotland after announcing in October 1990 that he was gay.

Adelaide United player Josh Cavallo is the only current openly gay top-flight male professional footballer in the world, having come out last October.

Daniels' announcement drew instant reaction across football, with the Premier League tweeting "the footballing world is with you", while several clubs called the teenager "an inspiration". Sheffield United said the moment was "a monumental step forward for LGBTQ+ inclusion".

'I've been hiding who I am'

Daniels says his announcement comes at the end of what he says has been a "fantastic" season for Blackpool, during which he made his first-team debut and signed a first professional contract.

"But off the pitch I've been hiding the real me and who I really am," he told Blackpool's website.external-link "I've known my whole life that I'm gay, and I now feel that I'm ready to come out and be myself.

"It's a step into the unknown being one of the first footballers in this country to reveal my sexuality, but I've been inspired by Josh Cavallo, Matt Morton and athletes from other sports, like Tom Daley, to have the courage and determination to drive change."

Daniels said he has confided in youth-team players, who have supported and embraced his decision.

"I've hated lying my whole life and feeling the need to change to fit in," he added. "I want to be a role model myself by doing this.

"There are people out there in the same space as me that may not feel comfortable revealing their sexuality. I just want to tell them that you don't have to change who you are, or how you should be, just to fit in."

Before Daniels' announcement, Fashanu was the only male footballer to have come out as gay while playing professionally in the UK.

There are a number of openly gay players in women's football, and several men's players have come out once their playing careers were over.

"Well done Jake Daniels," he tweeted. "Have a wonderful career! Great to see the support of Blackpool FC and Stonewall UK to make this possible."

The Premier League partners with Stonewall's Rainbow Laces campaign,external-link which is aimed at encouraging more acceptance of LGBT+ diversity.

Blackpool said it has worked closely with Stonewall to "support" Daniels and that the club "is incredibly proud that he has reached a stage where he is empowered to express himself both on-and-off the pitch".

The club added: "It is vital that we all promote an environment where people feel comfortable to be themselves, and that football leads the way in removing any form of discrimination and prejudice."

Former Leeds United player Robbie Rogers announced he was gay when retiring in 2013, before returning to the game with LA Galaxy and winning the MLS Cup. In doing so he became the first openly gay male athlete to win a major professional team sports title in the United States.