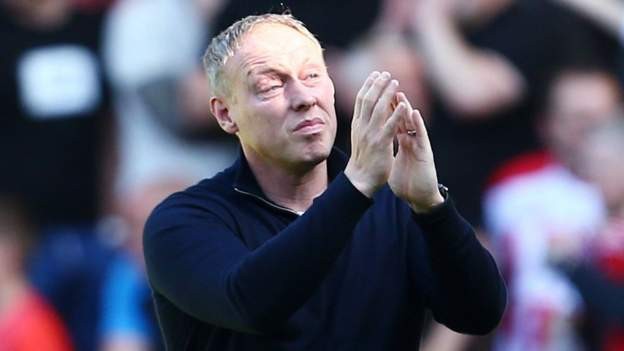 Nottingham Forest manager Steve Cooper says his side want to deliver one more home performance to make their fans "proud" in their play-off semi-final second leg against Sheffield United.

Forest take a 2-1 lead into Tuesday's return at the City Ground with a final place at Wembley at stake.

"Our support this season has been incredible," Cooper told BBC Radio Nottingham.

"We want them to be proud of their team so let's aim to do that again."

Forest in charge after first-leg win over Blades

Since the start of the year Forest have won 12 out of 14 games at home, with their only defeat coming against quadruple-chasing Liverpool in the FA Cup quarter-finals in March.

Their exit from that competition came after pulsating wins over Premier League Arsenal and then-holders Leicester City and, with another sell-out crowd set for the visit of the Blades, Cooper is relishing the prospect of another memorable night.

"We've been selling out for a while now and of course there's going to be an excitement and anticipation so we're looking forward to the game," he added.

"When it's a game with things on them then it's even more exciting.

"Sheffield are similar - they get good gates - so both teams will be used to playing in front of big numbers. We just have to make sure we commit to the plan and believe in what we're doing.

"It's about really understanding what got you into this place - to be in the play-offs means we've done a lot of things well. The play-offs are random and always seem to be tight."

Forest's lead - secured by goals from Jack Colback and Brennan Johnson in Saturday's first leg at Bramall Lane - could have been more comfortable but for the Blades' injury-time strike from Sander Berge. Despite that late setback, Cooper does not think that will affect his players' confidence going into the second game.

"The preparations will stay the same, obviously you talk about the context of the game but we have to stick to our plan and deliver it.

"Even if it was 0-0 or level, it's in our hands - we've got a slight advantage with the scoreline but it's still in our hands and that's a good place to be."

Unlike Forest, who are trying to return to the Premier League for the first time since 1999, the Blades are looking for an immediate return to the top flight and boss Paul Heckingbottom knows the onus is on his side to take the game to Forest.

"We've got nothing to lose. If it's still 2-1 after 80 minutes then no problem, we're comfortable with that - we need to prepare for every eventuality," he told BBC Radio Sheffield.

"These are long ties and emotions start coming into play. It's about staying in the game.

"We've got nothing to lose - we've got to win the game, that's it. But you can lose it in the first five minutes."

The Blades are chasing a first promotion through the play-offs after eight failed attempts and Heckingbottom says going to the City Ground only one goal behind gives them real belief they can make it to Wembley to try to end that poor record.

"The late goal is pivotal - it changes the whole complexion in terms of their camp and ours," he added. "Their players came off the pitch gutted.

"It makes it interesting. We still have to win the game regardless of the score and there's not much they can hide from us or we can hide from them. It's still all to play for."