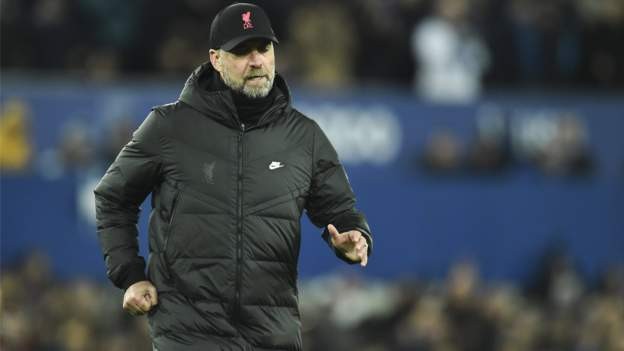 Liverpool boss Jurgen Klopp says their 4-1 win at Everton was a "big step in our development" and praised their ability to "put emotions to the side".

The Reds had won only once on their previous nine visits to Goodison Park but took the lead in the ninth minute on Wednesday - and never looked back.

"It was by far the best performance we've done at Goodison," Klopp told BBC Match of the Day.

"Later on I will enjoy watching it because I know the result, that helps it. I had moments tonight that I enjoyed a lot. I liked what I saw."

Liverpool scored four goals in an away league match against Everton for the first time since a 5-0 win in November 1982.

Jordan Henderson scored an early opener with Mohamed Salah netting either side of Demarai Gray's strike for Everton - and Diogo Jota added a late fourth.

The Reds dominated with 69% of the ball and had twice as many shots as the hosts.

"What football moments we had in the first half - incredible," added Klopp. "After half-time we controlled it. We showed the boys two or three situations and the way they defended we could have sent Sadio Mane and Mohamed Salah away a lot more in one-on-one situations.

"It was a nine out of 10 performance from each of the boys, apart from moments. We shouldn't take that for granted though. It is all about the boys. It was overall a pretty good performance."

Best Liverpool performance under me at Goodison - Klopp

Liverpool have won 17 of their past 22 games in all competitions, only losing once.

"Before the game people told me that in derbies, form or shape doesn't count, I see it totally different," Klopp said.

Virgil van Dijk and Thiago both suffered serious injuries in this fixture last season, back in October 2020. Van Dijk was hurt in a challenge by Everton keeper Jordan Pickford and spent nine months out with an anterior cruciate ligament injury.

"They're human beings obviously," said Klopp. "The last time we were here we had two massive injuries. We are like a family and when someone is badly injured, you come in the dressing room and you feel it.

"Virgil dealt with it exceptionally well, like Thiago did. All the boys did because you can become emotional."

Salah added: "It is great to see him [Van Dijk] back and especially here. We knew before the game it could be emotional because he got injured before. He is our captain."

Former Reds midfielder Danny Murphy said on Match of the Day: "Liverpool were ruthless and relentless. The loss at West Ham raised a few question marks. The last two performances have been full of creative play.

"The captain, Jordan Henderson, epitomised that - four shots in the first nine minutes and if you go to Goodison you have to quiet the crowd down and to get the first goal is always key in a game like this.

"As the game grew on, Liverpool realised they had Everton for the taking - they have good competition in midfield which helps the performance of Henderson. It was a real captain's performance, leading by example, brilliant performance from the whole team."

Salah continued his remarkable form with a derby double, taking him to 19 goals in as many games this season in all competitions.

"He was angry after the game," said Klopp. "He wanted to score the third one. I don't take these things for granted. His second goal, you have to force these kind of mistakes. Mo put Seamus Coleman under pressure to win that ball and from then on it is a good chance he will score."

Salah has been directly involved in at least one goal in each of his last 12 Premier League appearances (13 goals, seven assists) - the third player to achieve that feat after Stan Collymore (12, March-August 1995) and Jamie Vardy (15, August-December 2015).

Ex-Wales and Everton defender Ashley Williams, on BBC MOTD, said: "Liverpool are frightening going forward and Mo Salah epitomises everything they do. You know what he's going to do, but stopping it is something else. He's lightning fast, he's got 19 goals in all competitions and he's carried on. He lives for goals and it is a joy to watch him."

With 13 league goals and eight assists in total, Salah has been involved in more goals than anybody else in Europe's top five leagues this season.

Former Scotland full-back Alan Hutton said on BBC Radio 5 Live: "Mo Salah is unstoppable at the moment - he is up there as one of the best players in the world. This guy is on fire."

This week he finished seventh in the Ballon d'Or voting for the best player of 2021.

Henderson added: "He's been outstanding this season and at the moment you wouldn't want to play against him. It makes my job easier because you just give him the ball and he goes and puts it in the net. It was outstanding from him."