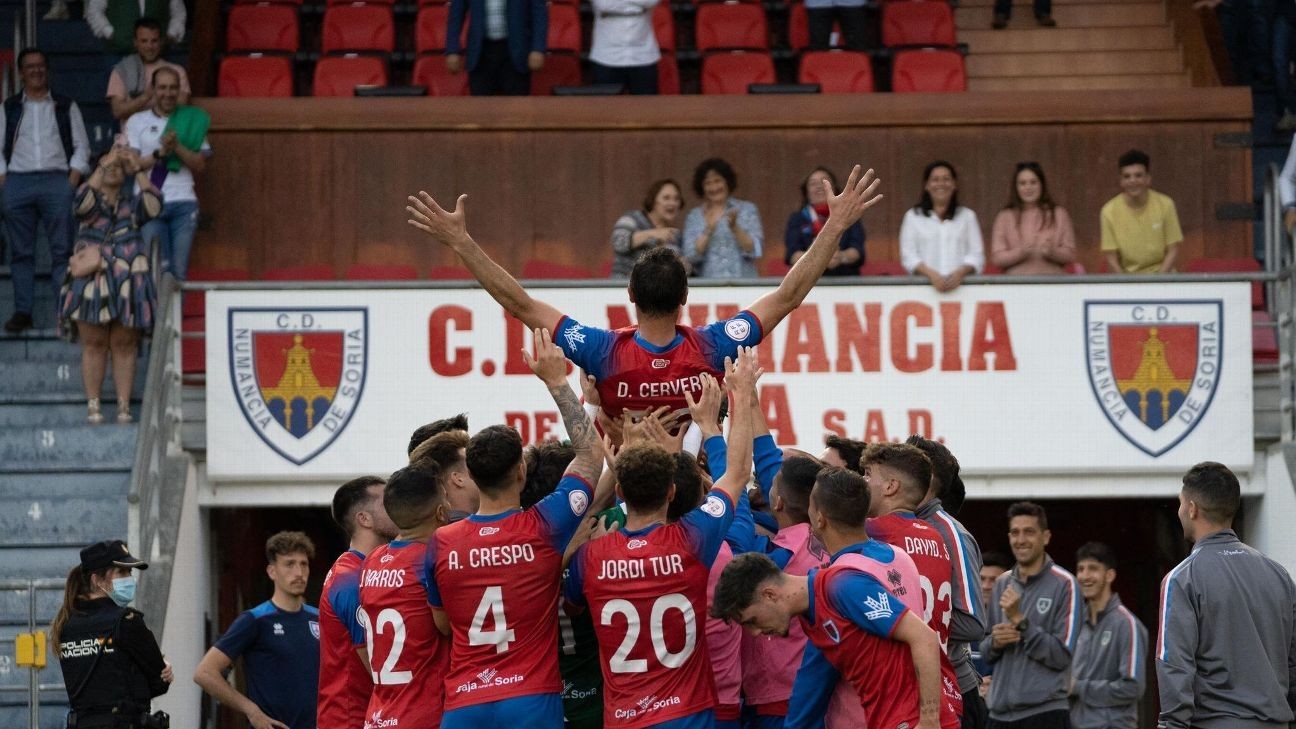 LLEIDA, Spain -- Not so very long ago, with Spain beginning lockdown, coronavirus cases rocketing and the crisis getting worse by the day, a not particularly well-known footballer playing for a small team in the third tier put a video on Twitter offering to work for any health centre or hospital that needed him. It was no empty gesture done for the likes: he doesn't have Twitter and not only did he immediately start messaging friends, asking them to please let him know if there was any way anywhere that he could help out, but he actually could help as well.

Diego Cervero is, after all, a qualified doctor. He's also the greatest football player in history, even if he doesn't say so himself.

Cervero once said he had two problems: one was his left foot, the other his right. He never even played in the second division let alone the first, even though he took his team there, not just fulfilling a promise, but going way beyond it. And he was never the most graceful of footballers, a man with the turning circle of a 10-ton truck. But ask anyone in Oviedo, the northern Spanish city where they're mighty proud of their club, and they'll tell you as much.

Ask some people in Marbella, Logroño, Fuenlabrada and Miranda, where he also played, and they might just say something similar. They might even at Barakaldo, where he scored five times, one of them from the half-way line, but where the pandemic brought it all to a premature end. Ask at Atletico Sanluqueno, where he found a place in the south and his team won a historic promotion; ask teammate Dani Guiza, certainly. Ask all his teammates: there's something different about him.

Maybe even ask them in Oldham, where he never played a competitive game, but even a summer on trial was enough to leave a mark on some. Some would take him back right now.

And look at the way they've responded to him announcing his retirement at Numancia this past week, something he did during their promotion celebrations. Oh, and while combining it with a marriage proposal. He was only there for four months and only got two goals, but the impact goes beyond that. Witness the guard of honor on his final home game last week, aged 38. On Sunday, he played the last game of a career that goes back two decades.

At Segunda B, there may be no player like him, possibly the closest thing there is to a legend at that level, but what had mattered, Cervero said, was what he had lived, the people he met along the way. How they had cared. "I wasn't the best player," he told Rafa Mainez from Radio Marca, "but mates would come and watch me play, even if it was just eight minutes. That's the business."

Everywhere he went, he left a mark over what really is a lifetime -- and, with apologies, it may be time to recognize bias here -- and in Oviedo especially. Ask Michu. "The greatest player in Real Oviedo's history," he told The Spanish Football Podcast, "is ... Diego Cerveroooooo."

Michu knows. Everyone does. Not the best, perhaps, but the greatest. The player they loved most. The player they felt a connection with, the player they knew was one of them. And that is, in the end, what being a cult hero is all about: some connection, some ... thing. Intangible, perhaps. Inexplicable, maybe. Unquantifiable, even. But something.

Actually, wait: unquantifiable? Not exactly. Cervero has scored more goals for the club than any player, ever, except Isidro Lángara -- the striker with the best goal ratio in the entire history of the national team -- and Eduardo "Herrerita" Herrera. Lángara and Herrerita were part of the "Delantera Eléctrica" ("the electric forward line") that saw Oviedo register their best-ever league finishes, just before the civil war. Two men who, objectively, are a long, long way ahead. And who, emotionally, are a long way behind.

Cervero got one final sub appearance on Sunday as Numancia closed out their season. Courtesy of Sid Lowe / ESPN

Cervero scored 141 goals for Oviedo. He was asked once which goals he would have liked to score. One in the first division, he said, one in the second division and one at Sporting Gijón at the Carlos Tartiere -- against his rivals and in front of his fans. He never had the chance to score any of them, but they didn't stop them loving him. In fact, it made them love him more.

He was there in the good times and bad ... but mostly bad. Very, very, very bad. And that was why they loved him. Because his was his club too. Asked what Oviedo means to him, he breaks into song, and in English, which he only just speaks. "It's my liiiiiiiife." And it was too, still is -- he goes to watch them play -- and always will be. Genuinely: don't be surprised if he ends up as the doctor there one day.

Having joined his hometown club at the age of 9, he was finally called into the first team because, put bluntly, there weren't many other players. Oviedo, historically a top-tier team, had been relegated from the first division in 2001. A double relegation followed, two divisions in one go -- one on the pitch, one off it, a punishment for their financial crisis after unpaid players denounced the club. In two years, Oviedo had gone from the first division to the "third," which is in fact anything from the seventh to the 24th tier. It was The End. Or so it seemed. They were on the verge of going out of business, the local council turning its back and players departing. There was virtually no one left. There was no hope either.

But Manolo Lafuente, the president, refused to give in. And so did Cervero. Oviedo built a team from those left in the youth system. Cervero got the call in his car one day heading out of the city, telling him they wanted to offer him a first-team contract. The salary was virtually nonexistent. "Go home, speak to your family and come back tomorrow and let us know," he was told. He stopped the car, turned around, drive to the club's offices and signed barely 15 minutes later. There was no way he was going to risk them changing their minds.

He was a striker -- big, burly and with giant sideburns that became his trademark -- but for nine games, he didn't score. In his 10th, he got four. It was November 2003. At the end of the season, Oviedo reached the playoffs, but failed to go up. He was devastated. He was in tears and made a vow. "I don't think I am good enough to play the first division with Oviedo," he said, "but until Oviedo go up to the Segunda B, either I die or I am not leaving here."

The next year, they did. He scored 18. He also left, having scored 31 goals in 92 league games, in part because of the need to complete his medical studies.

In 2007, he was back again. Oviedo had slipped down to the "third" division again. Time to repeat his vow. He scored 26 that year, and 35 the year after. Oviedo went up and he scored in Mallorca as they did so. Hope returned and he departed, his work done: 61 goals in 76 league games. Oviedo were alive, there was a future. He had left them where he said he would.

As the local paper La Voz de Asturias put it: "Diego Cervero is much more than a football player; he is the symbol of the resurrection of a team, one of those figures that are irreplaceable when it comes to telling the history of a sporting institution. When Oviedo they were going through the very worst, a long way from professional football, he was the man who best represented upon the pitch the fight of an entire fan base off it."

Yes, Oviedo were alive. Just about.

"It's impossible for Oviedo to disappear," Cervero promised in 2010, while at Logroño (where he scored loads of goals too), but it was becoming increasingly possible. The economic crisis was acute and the owner who had provoked that crisis, had gone into hiding, escaping across the Atlantic Ocean and being pursued by Interpol. Cervero returned for a third time in 2012, under an interim board of fans -- heroes, one and all -- who were desperately trying to keep the club afloat.

Cervero never made it to Spain's top division in his career, but his goals -- and his humanity -- made him a fan favorite everywhere he went. Courtesy of Victor Valero / CD Numancia

By November, Oviedo were 15 days from going out of business, a desperate share-issue their last shake of the dice. Amazingly, it worked: the response was massive, the fans again riding to the club's rescue, saving it at the 11th hour. As fans queued in the cold outside the club offices to buy shares, pouring their cash into the club, Cervero delivered pizzas. He also bought shares himself. A lot of them.

Alas, promotion didn't happen that year. Two years later, it did. By then, Cervero was not really considered good enough anymore. He was the club captain, but he was not in the team. He barely played, his career seemingly coming to an end. But in the first leg of the playoff against Cádiz, the tie that finally returned Oviedo to the second division -- and what Spaniards consider professional football -- he came on as a sub.

Cervero had known that he would only play if they were in trouble, and they were. He had prepared for this, worked every minute of every day knowing that a handful of minutes would be all he got, if he got anything at all. In spite of it all, he had a feeling that he would, a sense that his time had come, like destiny called. He was right. A cross from the right and there he was jumping. His header, the most important goal anyone had scored in 20 years at the club, maybe even more, flew into the net and 30,000 people lost their minds.

No one lost it like Cervero, a man prone to losing his head. A loveable lunatic. There he was in the middle of the madness: his and theirs, the whole place going wild, barely able to believe this. His goal had made it possible for Real Oviedo, his Real Oviedo, to go up to a division that, deep down, he knew he would not be given the chance to play in. There was no choreographed celebration, just the rawest of emotion, screaming, thumping at his chest and then his head, down on his knees pounding the turf with his fists, tears in his eyes.

This past week, there were more. It's all over, the end of an era. A career closes, another opens. There's a doctor in the house.