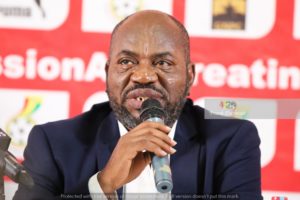 Aduana Stars captain Yahaya Mohammed has called for the Black Stars Management Committee to be dissolved immediately after Charles Kwabla Akonnor and his deputies were sacked on Monday.

According to the former Asante Kotoko striker, the Black Stars’problem isn’t only technical but managerial as those leading the team are not competent.

CK Akonnor and his deputies David Duncan and Patrick Greveraars were sacked on Monday following the Black Stars poor showing in the 2022 FIFA World Cup qualifiers against Ethiopia and South Africa.

The team managed a slim win over Ethiopia at the Cape Coast Sports Stadium before losing to South Africa in Johannesburg.

With Akonnor sacked and a three-member committee appointed to select a new coach within 72 hours on Monday, Yahaya Mohammed is also demanding changes on the Management Committee led by George Amoako.

“We have to stand up both the local and foreign players because those who are leading us are worrying us. Maybe the problem could not be technical but managerial”, he quizzed in an interview.

“Let ask ourselves if those who are leading the team deserve to be there.”

“If the things we hearing from the Black Stars camp are out there in the public I am not sure we will be able to stay in this country”.

The committee was tasked to select a new coach on Monday within 72 hours after Akonnor and his deputies were sacked.