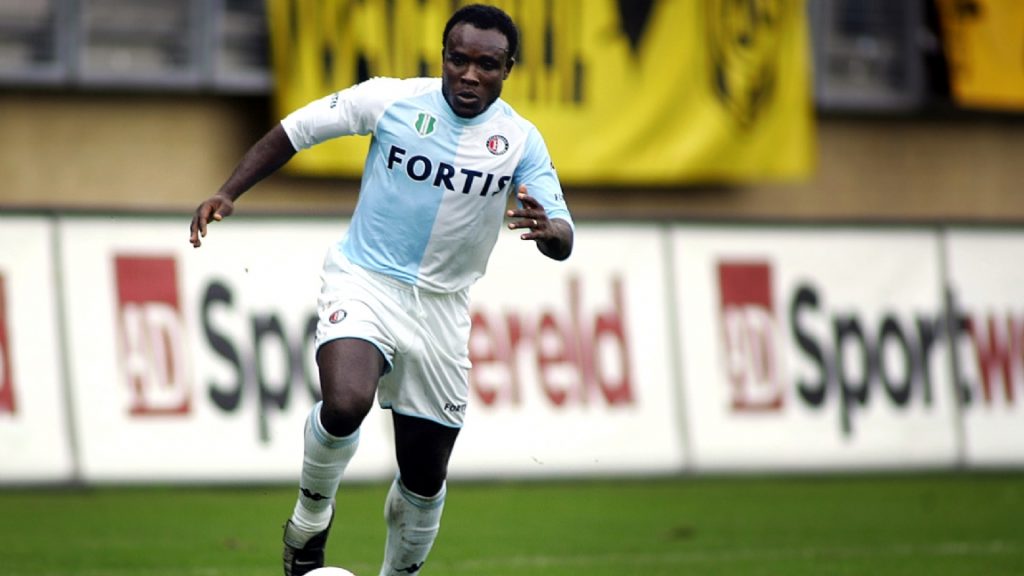 The Ghanaian died aged 43 in the Netherlands where he has been living after ending his career in 2010.

Christian Gyan was under contract in De Kuip for ten years and in that time conquered many hearts of the legion.

With winning a national title (1999), the UEFA Cup (2002) and the Johan Cruijff Scale, the little Ghanaian was not only extremely successful in his Feyenoord period; he also grew into a cult hero and huge crowd favourite.

Something that Gyan could not possibly predict when he made the step from his native country to the Netherlands at the age of seventeen.

He did this in 1996 together with fellow countryman Patrick Allotey, who died in 2007 and was only allowed to live to the age of 28. Gyan was first rented out to Excelsior, after which his Feyenoord adventure really started in the 1997-1998 season under then-coach Leo Beenhakker.

The absolute highlight for Gyan at Feyenoord was the UEFA Cup win in 2002. The small defender had a base place in the final against Borussia Dortmund and in that match, he fearlessly took on the tallest Jan Koller, of whom he even made a few header duels. managed to win.

Another image inextricably linked to the UEFA Cup final is that of a praying Gyan minutes before kick-off. The deeply religious Ghanaian, who also wore a shirt with texts about God under his match shirt, called out for help from above on the field with his arms wide and eyes closed.

Not infrequently the 'Christian Gyan olé olé' blared from the stands in De Kuip, sometimes even for minutes and almost always as a result of the Ghanaian laughing bare his teeth. The back himself had a suspicion where his popularity with the legion came from. "Maybe it's because I'm a player who always works hard. That's what the fans love,' he once said.

The fact that Gyan acquired a hero status and was not forgotten in Rotterdam after his playing career became clear after it became known in Michel van Egmond's book 'King' about Gyan that the happiness of the public's favorite was threatened in various ways.

A number of Feyenoord supporters then decided to set up a fundraising campaign. Feyenoord itself also supported this initiative by handing over its part of the proceeds from the sale of the book in its entirety to Gyan.

The Ghanaian, who also started working in the port of Rotterdam after his time as a football player, was handed a check with an amount of 35,500 euros prior to Feyenoord's home match against NAC Breda in September 2017.

From the field he also saw how a large banner was unveiled from the stands on the north side, with an image of himself and the striking text 'Once a Feijenoorder, always a Feijenoorder'.

The fact that Gyan's death also stirs up a lot among supporters can be seen from the many reactions that were shared on social media after today's sad news.

With Gyan, Feyenoord loses a former player with a real Feyenoord heart, a favorite of the legion and above all a fantastic person.

The club wishes all relatives a lot of strength in coping with this great loss. Supporters who want to express their condolences can leave a digital message on this page .