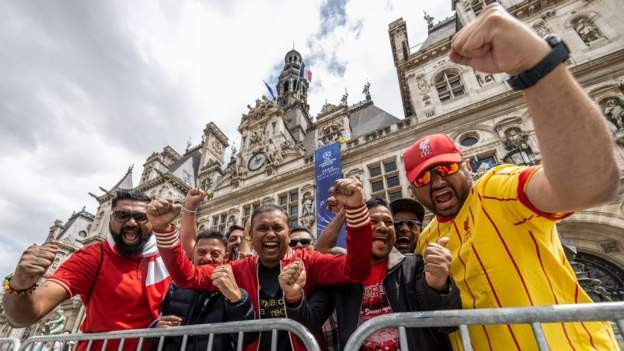 The French authorities expect over 70,000 Reds' supporters in Paris

Liverpool fans in Paris for the Champions League final against Real Madrid may be fined if they wear club colours around the Champs Elysees.

The wearing of football colours is prohibited in the popular tourist attraction area from the Place de la Concorde to the Arc de Triomphe.

Those who dress in club scarves, hats or display banners can also be fined 135 euros by police.

Liverpool have received an allocation of 19,618 tickets for the match at Stade de France on Saturday.

However, while fans without tickets have been urged not to travel or attempt to buy tickets from third parties, the French authorities still expect more than 70,000 Reds' supporters in Paris.

A fan zone has been set up in the south-east of the city at Cours de Vincennes, just over six miles from the ground to accommodate the Liverpool supporters on Saturday.

The gates are scheduled to open from 13:00 BST, with food and drink on offer as well as music from the Lightening Seeds, Jamie Webster and former Cast frontman John Power.