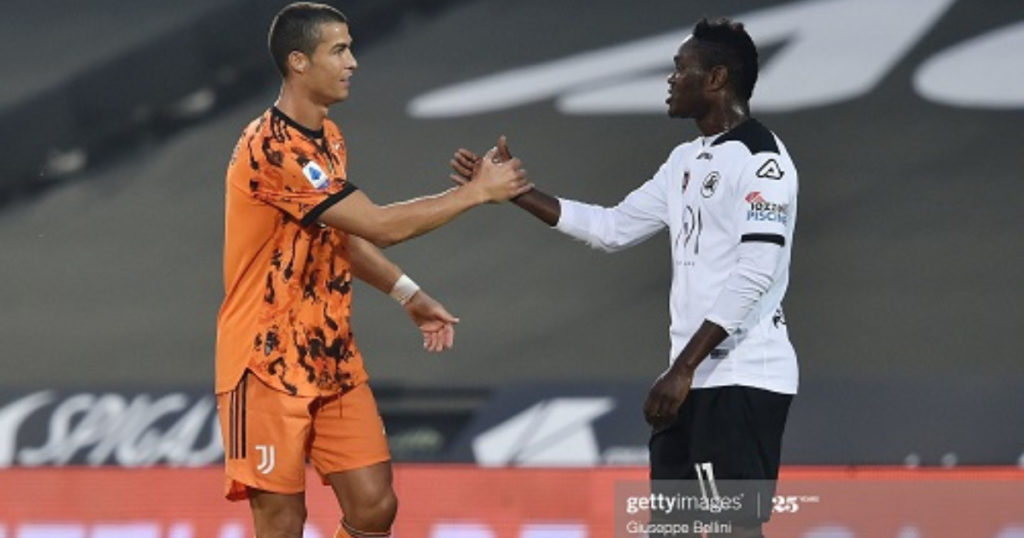 Ghanaian forward Emmanuel Gyasi has opened up about meeting his idol Ronaldo, revealing that he almost passed out when the Portuguese star handed him his shirt.

They met when Ronaldo was in Italy. Their first meeting took place in Spezia, followed by a meeting in Turin, where Ronaldo presented Gyasi with a signed shirt.

“I still get chills. When I met him in Spezia-Juventus I found the courage to go and say hello and I said: 'Cristiano, you are an example for me and for everyone'.

He replied: 'Keep working and cultivating your dreams'. At the return match, in Turin, he came to look for me to give me his shirt. At that moment I almost fainted,” Gyasi told Corriere dello Sport.

Meanwhile, the Spezia winger has revealed that as a child, he idolized Brazil legend Ronaldinho.

“I dreamed of imitating my first idol: Ronaldinho. Every play of his was a joy and I tried to imitate him. On Sundays, I played games with my friends on the pitch without grass and all barefoot. Pure fun and no one was going to miss it. I often think back to those moments. Those games made me hungry to get to Serie A and face Cr7 [Cristiano Ronaldo].

“Growing up I got passionate about him too and it was crazy to face him. I still get chills. In Turin he came to look for me to give me his shirt, I was about to faint.”

When Gyasi was asked what he would say to his first idol Ronaldinho over dinner, he replied, "For dinner with him, I probably wouldn't ask him anything, but I'd only say thank you because with his football he made many children like me happy"

Gyasi has scored five goals this season for Spezia who are in a good position to stay in the top flight.