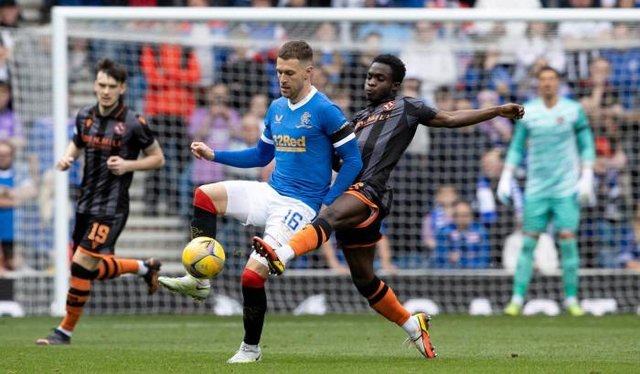 The Ghanaian already has a cult following on Tayside after making his full debut last weekend against Rangers.

“It was a hard one for him against Rangers, not having a lot of the ball. When we do, it suits his style a lot more.“He’s definitely one for the future. He can really kick on if he wants to, but for any young player, it’s a long, hard road with ups and downs.“Hopefully, he can come through for us and be a top player and go on to big things.”

Cudjoe is not the only hotly-tipped prospect either, and Mulgrew is only too aware of the talents around him and the advice he can supply.

“There are some good young players who have had a good upbringing at Dundee United. They’re learning all the time.“Whether in midfield or at the back, I just try to help them as much as I can – even though sometimes I’m really tired and it’s hard to get the words out to tell them where to be and help them along.

“But there are some real good players. Archie Meekison’s somebody who has great game knowledge and good to play alongside.

“Young Dylan [Levitt] on loan from Man United is also a really good player. I’m probably a bit disappointed we didn’t have more of the ball to show their qualities.”

Cudjoe will be playing European club competition next season after Dundee secured qualification to the Conference League.