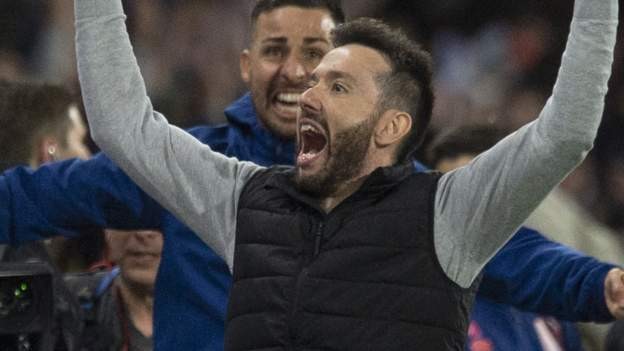 Jordan Rhodes' goal sealed a 2-1 aggregate win over Luton, leaving them one game from the Premier League.

Nottingham Forest or Sheffield United will provide the opposition on 29 May.

"It's important that the players celebrate now between themselves and with their families," Corberan said.

He told BBC Radio Leeds: "It was the target we had to achieve right now. From tomorrow, we will have a different target and for everyone it will be to rest before we start to prepare for the next game.

"I know in two or three days that we are going to have to recover a little bit. The players are going to need a similar mentality to go to Wembley and make something important."

The crowd of 23,407 also played its part in creating an intoxicating and intimidating atmosphere that carried Corberan's side through some tough moments.

Nathan Jones' Hatters were denied by the heroics of Town goalkeeper Lee Nicholls, with Harry Cornick in particular finding the former MK Dons player a troublesome barrier at the raucous John Smith's Stadium.

"It was so, so, so special the support that they were giving us," Corberan added.

Among those putting their body on the line to get the Terriers to the national stadium for a shot at the top flight was centre-half Tom Lees.

The defender helped the team keep a priceless clean sheet under terrific pressure.

"It's the icing on the cake for what's been a great season - we just want to make sure this is not the final step," Lees told BBC Radio Leeds.

"We thought going to Luton was one of the toughest fixtures on the calendar, but this was even harder, and they can count themselves unfortunate that they haven't scored.

"But we've had a knack for that this season, digging in and working hard and probably on our most important night of the season we kept a clean sheet. I think that sums up our season."

Although Lees has been part of a promotion campaign before, helping Bury into League One during a loan stint early in his career, the play-offs have only provided disappointment before now.

He was a beaten finalist in 2016 when Sheffield Wednesday lost to Hull, and scored an own goal in the following year's semi-final against current club Huddersfield, as the Owls bowed out on penalties.

"I'm delighted to get another chance - it might be one of my last," Lees added.

"So I'm just going to prepare, give it our all and that's what we've done all this campaign.

"And, it's a bit of a fairytale story with [Jordan] Rhodesy getting the winner. Everyone's worked so hard and tonight was another night where we had to work so hard."

Wales winger Sorba Thomas described boss Corberan as 'The Professor' as he celebrated post-match, highlighting the tactical switch which saw him introduced off the bench to create Rhodes' winner from a dangerous free-kick.

Such attention to detail is now the focus again for the Spanish coach, who has turned from a side finishing 20th to one set to walk out at Wembley in the richest game in football, worth up to £265m if longer-term survival can be achieved.

"It's one more game that we have to prepare really well for - we have to analyse the opponent and to compete at our best level," Corberan added.

"What we will try to do is make the result the consequence of our positive performances. There are still things to improve.

"Now it's time to analyse, prepare and enjoy the opportunity to play another game."