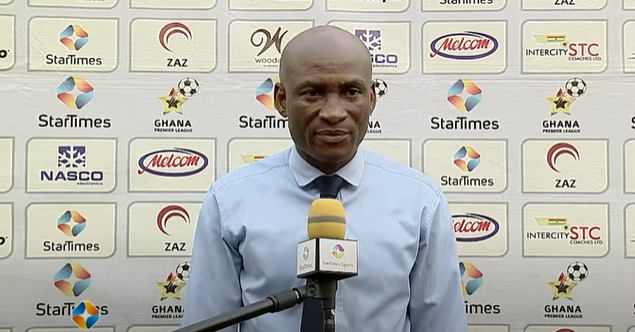 Asante Kotoko coach Prosper Narteh Ogum said his side delivered their best performance of the season in the win over Medeama on Sunday.

The only goal of the game was scored by Cameroonian Mfegue Omgba in the 79th minute, with the Porcupine Warriors denied a big victory by the impressive Boris Junior who made many top-class saves including a penalty.

“Fantastic,” Ogum summed up his team's performance, saying “I saw the best of my team today. We were very patient on the ball, we saw alot of the ball, we made intelligent decisions on the ball, we created a lot of spaces on the field of play and we utilised those spaces. I am impressed.”

“I think this is the best performance I have seen, especially in the first half. We were actually dominant. We controlled the tempo and temperament of the game. We were just on top."

Mfegue won the ball high up the pitch, drove into the box and scored with a brilliant finish.

“He has a lot of energy in him, and fortunately he is very intelligent so offensively he knows how to position himself, defensively too and especially how to distribute his energy throughout the game,” Ogum lauded Mfegue’s work rate.

Kotoko have opened a six-point lead at the top of the table.