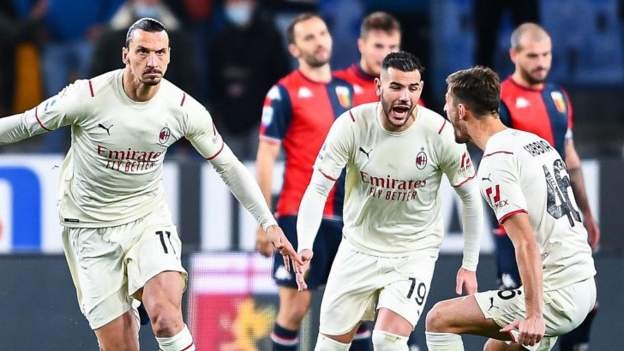 Zlatan Ibrahimovic has helped Juventus, Inter Milan and AC Milan win Serie A during his career

Two goals from Junior Messias and one from Zlatan Ibrahimovic gave AC Milan victory at Genoa and cut Napoli's lead at the top of Serie A to one point.

Ibrahimovic, 40, scored his sixth goal of the season early on, before Messias added a second just before half-time and made it 3-0 after 61 minutes following good work from Brahim Diaz.

Napoli led 2-0, but Sassuolo fought back to draw 2-2 with a late equaliser.

Inter Milan won 2-0 at Spezia, so only two points separate the top three.

Lautaro Martinez had a hand in both Inter goals, setting up Roberto Gagliardini's first-half opener with a deft flick, before converting a penalty 30 minutes from time.

The defending champions have now won their past three league games as they prepare to face Roma at the Stadio Olimpico on Saturday.

Jose Mourinho's side head into that game on the back of a 1-0 defeat Bologna. Mattias Svanberg scored the winner for the hosts after 35 minutes.

Most of the night's drama came at Sassuolo, though.

After a goalless first half, Napoli - aiming to become Italian champions for the first time since 1989-90 -scored twice in a nine-minute spell through Fabian Ruiz and Dries Mertens.

Gianluca Scamacca pulled one back for Sassuolo in the 71st minute and Gian Marco Ferrari grabbed an 89th-minute equaliser.

It could have been even worse for Napoli as Gregoire Defrel thought he had won the game for the hosts in stoppage time, only for VAR to disallow the goal.

Manolo Portanova (Genoa) wins a free kick in the defensive half.

Pietro Pellegri (AC Milan) wins a free kick in the defensive half.

Attempt missed. Alessandro Florenzi (AC Milan) right footed shot from outside the box is too high following a corner.

Pablo Galdames (Genoa) wins a free kick in the attacking half.

Alexis Saelemaekers (AC Milan) wins a free kick in the defensive half.

Attempt missed. Pablo Galdames (Genoa) right footed shot from outside the box misses to the right following a corner.