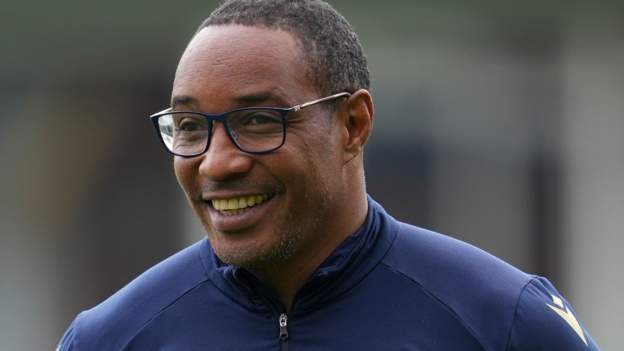 The 54-year-old had been in charge on an interim basis since February when Veljko Paunovic left the club.

The former Liverpool, Manchester United and Inter Milan player led the Royals to four wins and three draws in his first 11 games as Reading avoided relegation from the second tier.

Alex Rae, who has been assisting Ince, has also joined permanently.

Reading, who were deducted six points this season for breaching the EFL's financial rules, were five points above the relegation zone when Ince took over.

They ended one place and four points above the bottom three, although their survival was assured with two games left to play.

"Paul and Alex were brought into Bearwood to instil confidence, structure, spirit and determination into a first-team squad which in difficult circumstances had lost its way early in the year. And ultimately, he had to produce almost immediate results," chief executive Dayong Pang told the club website.external-link

"Fourteen points from their first 10 games proved enough to keep the club in the Championship and I am delighted that Paul and Alex have accepted the challenge to take this club forward."

Reading is the sixth different club Ince has taken charge of, having also had spells at the helm at Macclesfield Town, Blackburn Rovers, Notts County, Blackpool and twice at Milton Keynes Dons between 2006 and 2014.

He led Milton Keynes to the EFL Trophy and League Two title in the 2007-08 season before leaving that summer for Blackburn to become the first black British manager in England's top flight, although only three wins in 17 games saw him lose his job in December that year.

As a player he won 53 caps for England, helping the national side reach the semi-finals of Euro 96 before famously inspiring Glenn Hoddle's team to reach the 1998 World Cup finals with a memorable performance in a 0-0 draw against Italy in Rome.

Ince's appointment comes as the club has welcomed back former manager Mark Bowen as head of football operations.

The former Wales international, 58, first joined the Royals in 2019 as a technical consultant before becoming sporting director before the 2019-20 season.

In October 2019 he took over the first team with the club bottom of the Championship and led Reading to a mid-table finish but left after Paunovic took over first-team affairs in the summer of 2020.

He had been interim manager at AFC Wimbledon until leaving the role earlier this month.

Bowen will lead Reading's recruitment, sports science, analysis and academy as the club aim to control costs which saw them be placed under a transfer embargo and have points deducted for exceeding spending rules.

"Owner Mr Dai and I recognise the considerable impact an appointment of this nature can make within the structure of the club and, as well as boasting a huge level of experience in football at the highest level, in Mark we have appointed an individual who possesses a very clear, strong understanding of Reading Football Club and the specific challenges we face," Pang added.

"He will provide valuable guidance, a football-driven focus and consistency across our first team and academy age groups, which we are confident will help re-establish an identity across all the pitches at Bearwood Park and develop a footballing culture which will be defined by an aim to ensure our players achieve their maximum potential. I'm very much looking forward to working with Mark once more."