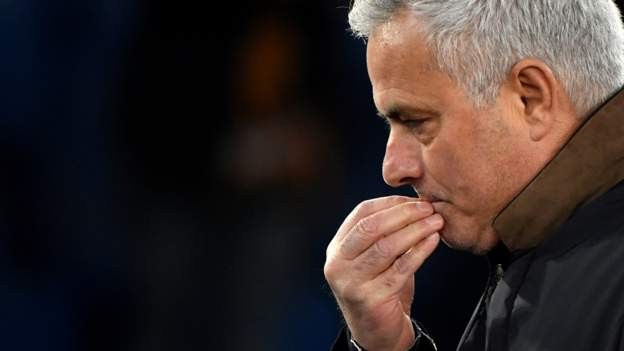 When Jose Mourinho was named Roma manager last May, it was considered a major coup for the Italian club and the city gripped by a fervour and belief that he was the man to take them to the next level.

His appointment came almost exactly 20 years since Roma's last Serie A triumph and, while there have been two Coppa Italia successes since, it was 2008 when fans last had any silverware to celebrate - and there was a sense things were about to change.

But things have not gone smoothly.

The 6-1 humiliation at the hands of Norwegian side Bodo/Glimt in the Europa Conference League (ECL) three months ago was the low point and their domestic form has also been patchy.

Roma are seventh in Serie A - the same position they finished last season and one that led to predecessor Paulo Fonseca's departure - and on 9 January were 3-1 up at home to Juventus, only to concede three late goals and lose 4-3.

Mourinho said afterwards his players had suffered a "psychological collapse" - the kind of criticism familiar to those who have followed the Portuguese in his recent spells in charge of Manchester United and Tottenham.

But despite those difficulties, he retains support from the club's fans and owners. He has credit in the bank, for now at least.

Mourinho has been backed by Roma's owners in the transfer market, Tammy Abraham's signing from Chelsea was part of a 100m euros (£83.6m) investment'If Mourinho can't succeed at Roma, no-one can'

Mourinho's appointment on a 7.5m euros (£6.25m) per year contract for three years was greeted with much talk by club and manager of "the project".

There was the promise of the necessary time required to build something new and long-lasting and of generous transfer funds available.

And Mourinho has been backed. In the summer, Roma signed Matias Vina, Rui Patricio, Marash Kumbulla, Eldor Shomurodov and Tammy Abraham for a total investment of 100m euros (£83.6m).

Things began well with seven wins from his first eight games in charge. But as winter set in, so results became gloomier. They lost the Rome derby to Lazio, were beaten by Juventus and AC Milan, suffered surprise losses to Venezia and Bologna and, of course, that embarrassment at Bodo/Glimt.

In fact, Roma have only really won one league game this season against a club considered to be at their level - a December victory at Atalanta.

Yes there have been other victories and their recent form has been OK - they have overcome Cagliari and Spezia in their past six matches - but the man who was supposed to help the club compete with the division's stronger sides is not doing that yet.

It should be noted Mourinho did not inherit an easy situation.

Roma's squad is unbalanced. Henrikh Mkhitaryan and Lorenzo Pellegrini are not contributing much to defensive work in midfield, forcing Jordan Veretout to play out of position, while defenders frequently suffer lapses in concentration.

Mourinho has forged a reputation as a master of building a strong, stubborn unit, yet issues around leadership and mentality- which pre-dated him - appear to have remained untouched.

So far, there are no signs of his trademark football. Where is the typical defensive solidity and cynicism of his teams? Roma tend to be caught off balance and concede easily, so will midfielder Sergio Oliveira, a decisive figure in last weekend's win against Cagliari, be a new key for balance in front of the defence?

"Roma fans consider Mourinho the final chance - if he can't succeed, no-one can," said Matteo De Santis, a journalist with La Stampa in Rome. "It's romantic to imagine he will finally bring a trophy to the club as it was him who talked about Roma's 'zero titles' in 2009 when he was at Inter.

"He's one of the most successful managers ever. Moreover, people love his attitude. He's not scared to take on referees and journalists and to make specific requests to the club. Fans are with him unconditionally."

There was always a sense this was a gamble on the part of the club and Mourinho himself.

In some ways it is paying off for Roma. The manager, 59 next week, has added value to the club and its owners and there is a greater interest in them now. There are increased commercial opportunities, he is popular with fans and great for the media.

But, ultimately, what matters is how he shapes the team on the pitch. This is among the most difficult challenges Mourinho has ever faced and, having previously managed clubs of the stature of Chelsea and Inter Milan, there is a sense he will not get many more opportunities among Europe's biggest clubs if the "failures" at Manchester United and Tottenham are not soon followed by notable success.

Inter Milan, AC Milan, Atalanta and Napoli are simply stronger in the league than Roma, and Juventus, albeit enduring a difficult season, are still Juventus.

So it is the Coppa Italia and Europa Conference League which represent two great opportunities for Mourinho in this campaign.

Roma host Lecce on Thursday in the last 16 of the Coppa Italia and are into the knockout stages of the ECL, winning their group despite their defeat in Norway. The path to a European trophy is a relatively clear one with his former club Tottenham, the other highest-ranked team involved in the group stages, eliminated.

It is not so long ago Mourinho was dismissive of the second-tier Europa League. But now that he finds himself in European football's new third-tier competition, it is one he must pursue.

The two cup competitions will define his season and go a long way to deciding how he is judged in Rome.

It is 61 years since the club's only European trophy - the Inter-Cities Fairs Cup - and ending that barren run would only strengthen the view that Mourinho is the man to bring long-term glory to Rome.

The artist formerly known as evil or genius? The team uncover the truths behind pop legend PrinceWho is the Q Shaman? The search for the story that drove crowds to storm the US Capitol