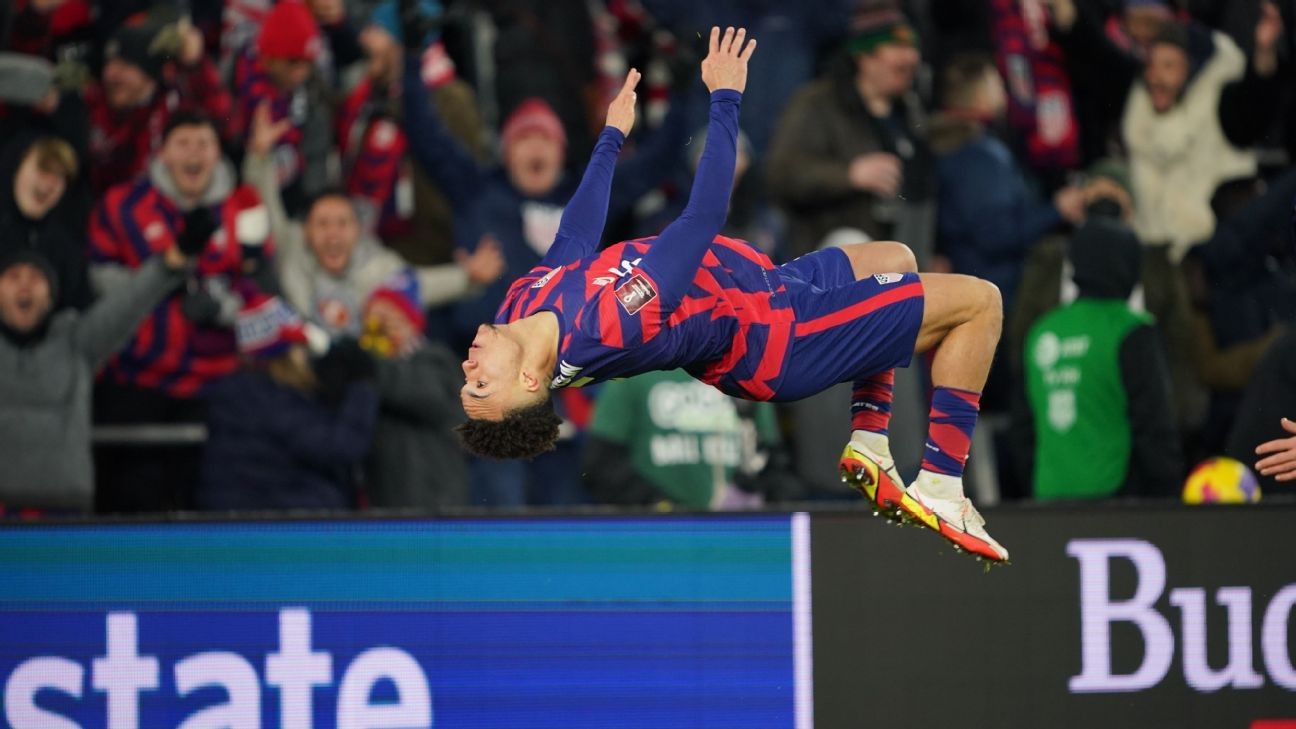 COLUMBUS, Ohio -- When the United States men's national team went into halftime with El Salvador on Thursday without a goal, any feeling of anxiousness that might have crept into the home locker room would have been understandable. With a World Cup berth not yet secured, anything other than a win would have been considered a massive disappointment.

For this USMNT team, though, it was a familiar and, maybe, an even comfortable position. The team has struggled in the first half throughout qualifying -- it has just two first-half goals in nine games -- but has routinely found ways to strike back in the second half. This game would be no different.

As he did against Honduras in September, left-back Antonee Robinson -- who goes by the nickname Jedi -- summoned the force for an important goal early in the second half, which held up in a pivotal 1-0 win.

"We call our full-backs the superpower of our team," United States manager Gregg Berhalter said. "We do that because they produce; they give assists and goals and if you look at World Cup qualifying so far, our full-backs have contributed heavily."

The sentiment of being linked to mystical abilities works just fine for Robinson, who has been called Jedi since he was a young boy due to his fascination with the Star Wars movies.

The United States has received strong play from other full-backs -- namely Sergino Dest and DeAndre Yedlin -- but Robinson, in particular, has developed into one of the most important players on the roster. His value was illustrated when Berhalter didn't include any other natural left-backs on the roster this window and was reinforced throughout the performance against El Salvador in which he made significant contributions in both defense and in attack.

Playing on the same side of the field as Christian Pulisic, who routinely dropped into midfield and moved centrally, Robinson was tasked with staying wide, where he was able to pressure the opposing outside back with the ball and get in position to send in crosses. In defense, he was part of a unit that was rarely challenged all game, often intervening in opposing attacks before they had a chance to develop.

On the goal, Jesus Ferreira, who earned his first start of qualifying, headed the ball into the area, where Robinson calmly slotted it home from about six yards out near the back post. It was a bit of a broken play, but Robinson credited Berhalter's strategy of having him hover near the back post when the ball came in from the opposite side.

He celebrated with a cartwheel into a backflip into a fake injury and a celebratory strut, which awakened the sold-out crowd of 20,000 in Columbus, where the team is now 9-1-2 all-time in World Cup qualifying matches.

Forward Timothy Weah admitted afterward he briefly thought Robinson pulled his hamstring during the celebration, but Berhalter found himself in awe more than anything.

"If a guy scores like that and chooses to do that, who might demand [he doesn't]. That's an amazing physical feat," Berhalter said. "So congratulations to him for even being able to do that. I think it's really impressive."

Coupled with Panama's loss at Costa Rica a short while later, the United States took a major step toward qualification. With five games left, the U.S. has a four-point lead over fourth-place Panama, the key team to watch with the top three finishers receiving automatic bids to Qatar 2022.

"It wasn't the prettiest game and there were times when we played good football, times when we just had to kind of dig it out," Robinson said. "Chances that we didn't put away, but we got the win and are one step closer to our goal of qualifying for the World Cup."

Throughout the week, the USMNT players maintained the frigid conditions in Columbus -- it was 32 degrees at kickoff and snowed lightly in the hours leading up to the game -- wouldn't be much of a factor and there wasn't much evidence to indicate it was. With 18 points through nine games, the U.S. has six more than it did through nine games in the 2018 cycle (when qualifying consisted of 10 games).

It will train Friday in Columbus before a short flight to Canada later in the day in advance of Sunday's game in Hamilton, which is located roughly an hour outside of Toronto. More than any perceived weather advantage the United States thought it was generating by playing in frigid Columbus, it was the minimal travel following the game that it valued. Conversely, Canada has a 2,000-mile trip back home after its 2-0 win against Honduras that allowed them to stay atop the CONCACAF standings.

After injuries kept Pulisic out of the starting lineup for the last five qualifiers, he captained the side during his return against El Salvador. It was an intriguing prospect to see him start with the midfield trio of Tyler Adams, Weston McKennie and Yunus Musah for the first time, but the combination didn't result in many threatening moments. On the left wing where he's most comfortable, Pulisic had trouble maintaining possession and when Berhlater subbed him off in the 65th minute for Brenden Aaronson, it was a just decision.

"It's just about him finding his top form, and really finding ways to get him in front of goal because that's where it really shines," Berhalter said. "When he's in front the penalty box is where he does his best work."

Berhalter's decision to start Ferreira at striker was the only surprising decision in the starting XI. It had appeared Ricardo Pepi, Ferreira's former teammate with FC Dallas, had latched onto the starting role having started five of the last six games, but Ferreira offers something different. He's not the finisher Pepi is -- highlighted by two missed chances in the first half -- but he's better at linking play with the midfield and wingers, which was also on display.

Ferreira conjured up four chances created against El Salvador are the most by a USMNT player during a game this qualifying cycle, matching the four from the resident Jedi against Jamaica.

"[Ferreira] had enough chances to score a couple goals," Berhalter said. "So that's the most important thing. If he didn't have any chances in the game, I would have been concerned. But he did have chances and I think it's just a matter of him being able to finish those off. Regarding his link up play, I thought it was excellent."