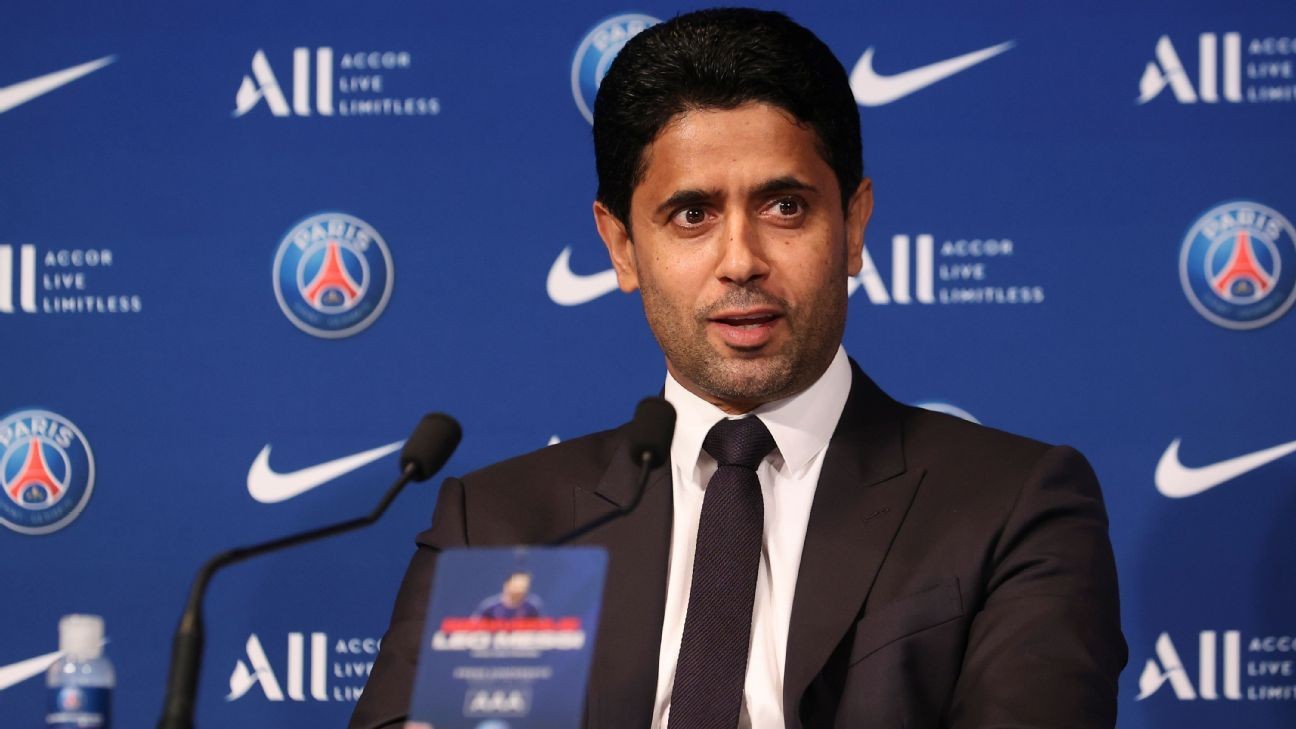 LaLiga president Javier Tebas has accused Paris Saint-Germain supremo and beIN Media Group chairman Nasser Al-Khelaifi of having "too many conflicts of interest."

In the wake of Kylian Mbappe's decision to sign a lucrative new contract with PSG and reject an offer from Real Madrid, Tebas has hit out at Al-Khelaifi and called for action.

- LaLiga to take legal action on PSG over Mbappe
- Inside Story: Why, and when, Mbappe chose PSG over Real Madrid
- Don't have ESPN? Get instant access

Tebas said during an event in Spain on Wednesday: "Nasser Al-Khelaifi is the PSG president, president of European Club Association (ECA), member of the executive committee of UEFA and chairman of beINSports (beIN Media Group), one of the biggest TV companies in the world that buys [broadcasting] football rights.

"He [Al-Khelaifi] wears a lot of hats, there's too many conflicts of interest and this cannot be. It can't happen in football in 2022. A leading actor like him cannot be in these organisations and preside over a TV channel that buys [broadcasting rights for] LaLiga, the Champions League, national teams..."

LaLiga will file a complaint against PSG over an alleged breach of finance rules regarding Mbappe's signing in a bid to "defend the economic ecosystem of European football and its sustainability."

"I expect to file a complaint to UEFA, hopefully before Friday," he said. "We will also file a lawsuit in France and we are also going to file one in Brussels. "We will see what we can do in Switzerland."

Tebas, who described what PSG were going to give Mbappe for his renewal as an "INSULT to football," has led criticism in recent years of PSG's and Manchester City's spending power and of breaching UEFA's Financial Fair Play (FFP) rules.

PSG and the club's president Nasser Al-Khelaifi have faced the wrath of LaLiga president Javier Tebas since Kylian Mbappe signed a new contract with the French champions. Photo by Sebastien Muylaert/Getty Images

It's not the first time LaLiga has acted against state-owned football clubs.

In 2018, PSG were cleared of breaking UEFA's FFP rules while City were temporarily banned from the Champions League for breaching FFP regulations in 2020 but the punishment was overturned by CAS upon appeal.

"Let's not forget that Manchester City and PSG were punished by UEFA after we reported them for breach of Financial Fair Play rules," Tebas said. "It was the Court of Arbitration for Sport (CAS) that took those bans away in a resolution that was very strange."

Despite LaLiga missing out on Mbappe, and the departure of Lionel Messi from Barcelona to join PSG in September, Tebas said Spain's top flight continues to get stronger.

"In order for a competition to grow, you must do other things, it's not just about the players or the clubs," he said. "Messi joined PSG and the French league in total gets €70 million ($74.6m) from international broadcasting rights while we get €900m ($959.2m) without Messi and Cristiano Ronaldo."