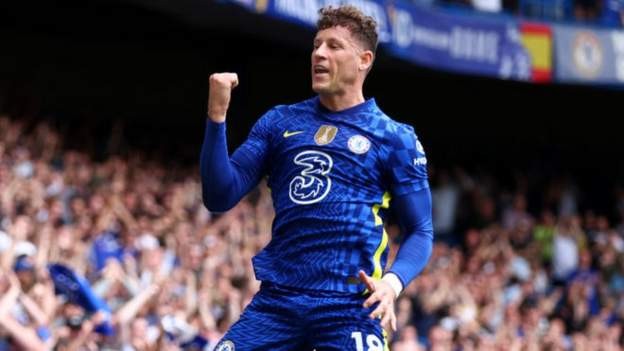 Barkley nodded Reece James' cross past Hornets goalkeeper Daniel Bachmann to earn the Blues all three points - four minutes after Dan Gosling had grabbed a late equaliser for the Hornets.

Kai Havertz converted a low cross from Kenedy - who was making his first Premier League start for the club since May 2017 - to give the Blues the lead early in the first half.

Gosling's header from Adam Masina's delivery appeared to have earned Watford a share of the spoils, but Barkley scored with virtually the last moment of action to deny Roy Hodgson's team.

Antonio Rudiger, making his final appearance for the hosts, was given a warm ovation by Chelsea supporters when he was replaced by Barkley midway through the second half.

Big summer ahead for Chelsea

Having secured third place courtesy of Thursday's 1-1 draw at home to Leicester, Tuchel made five changes to his starting line-up against the Hornets, handing Kenedy a long-awaited Premier League return for the club and Saul Niguez his first top-flight start since March.

Ben Chilwell was also on the Chelsea bench for the first time since rupturing his cruciate knee ligament in November.

Kenedy, who played just 15 minutes for the Hornets during a loan spell in 2016-17, was particularly lively early on and set up Havertz's opener with a marvellous low cross into the Germany's forward path.

Mason Mount, Chelsea's top Premier League scorer this season with 11, forced a fine save out of Watford goalkeeper Bachmann as Tuchel's side pushed for a second, before Havertz rattled the crossbar from another Kenedy pass.

Chelsea had Mendy to thank for preserving their slender lead at the beginning of the second half, but there was nothing the Senegal keeper could do to prevent Gosling from nodding Watford level in the final minute of normal time.

There was still time for one final twist however, as Barkley headed in his first goal of the 2021-22 campaign to lift the mood inside Stamford Bridge.

US billionaire Todd Boehly, who is expected to complete his £4.25bn takeover of the Blues later this month, was in attendance to see the club record only their ninth home league win of the season.

With Rudiger and Andreas Christensen set to leave in the summer and Spain internationals Cesar Azpilicueta and Marcos Alonso linked with Barcelona, Tuchel is expecting "open and honest" conversations with prospective new owner Boehly before a big summer for the club.

Farewell... but not goodbye?

Former England manager Hodgson will have enjoyed his team's second-half showing at Stamford Bridge but it was not enough to earn the Hornets a hard-earned point in front of his successor Rob Edwards.

Edwards will assume the Vicarage Road hot-seat this summer after leading Forest Green Rovers to the League Two title.

Hodgson, 74, announced earlier this month that he was planning to retire after leaving Watford - although he stopped short of ruling out a return to management in the future.

When he left Crystal Palace at the end of last season, Hodgson said the "time was right" to step away from the rigours of top-flight football - only to be appointed as Claudio Ranieri's replacement at Vicarage Road in January.

He was unable to lead the Hertfordshire club to safety, collecting just nine points from his 18 league games in charge as the Hornets were relegated.

One man whose Premier League career is definitely at an end is referee Mike Dean, who took charge of his 560th and final top-flight game on Sunday.

Attempt saved. Hakim Ziyech (Chelsea) left footed shot from the right side of the box is saved in the bottom left corner. Assisted by Malang Sarr with a cross.

Tom Cleverley (Watford) wins a free kick in the defensive half.

Goal! Chelsea 1, Watford 1. Dan Gosling (Watford) header from the centre of the box to the bottom left corner. Assisted by Adam Masina with a cross.

Ross Barkley (Chelsea) wins a free kick in the attacking half.

Attempt missed. Kai Havertz (Chelsea) left footed shot from the left side of the box misses to the left. Assisted by Ross Barkley.

Moussa Sissoko (Watford) wins a free kick in the defensive half.

Attempt saved. Ross Barkley (Chelsea) right footed shot from outside the box is saved in the centre of the goal. Assisted by N'Golo Kanté.