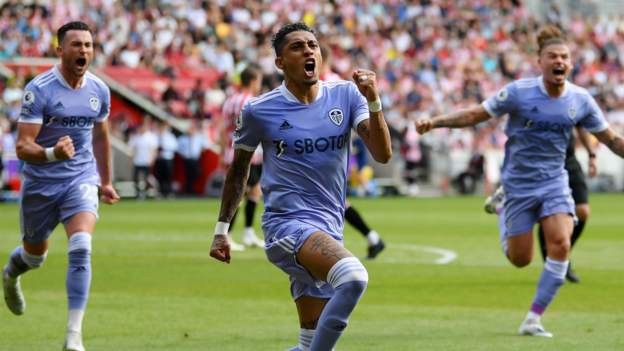 Jack Harrison's late strike from the edge of the penalty area sealed the win and in the end comfortably avoid the drop by three points as a result of Burnley's defeat by Newcastle.

It seemed Leeds were cruising to safety when Raphinha put them in front with a second-half penalty and Brentford were reduced to 10 men when Kristoffer Ajer had to go off when the hosts had already used their three substitutions.

But Sergi Canos looped in an equaliser two minutes before he was sent off for a second bookable offence.

With a two-man advantage, Leeds controlled the final stages, although it took Harrison's goal to completely relieve the pressure, with goalkeeper Illan Meslier running the entire length of the field to join in the celebrations and manager Jesse Marsch flat on his back in the technical area as he was swept away by the euphoria.

It means Leeds become the first side since Wigan in 2011 to survive after starting the final day in the bottom three.

Although the Leeds players and staff were booed by the Brentford fans for the length of their celebrations after the final whistle, which delayed the home side's planned lap of honour, it was understandable.

With just two points from their last five games, the sense of trepidation among the Leeds fans on their journey south was understandable.

If a reminder was needed of how uncertain this day could be, it came in a two-minute period midway through the opening half.

News of Newcastle's penalty at Turf Moor was filtering into the visiting section, which was starting to crackle with excited noise, when Joe Gelhardt buried a shot into the Brentford net.

The reaction of referee Paul Tierney suggested he felt the goal would not stand and VAR duly ruled it out for offside. At almost exactly the same time, Newcastle converted their spot-kick.

Even after Raphinha had kept his nerve to find the net after he had been chopped down by Brentford keeper David Raya, they still did not allow themselves to believe the escape act was on.

Canos brought them down to earth with his equaliser but was booked for celebration and then followed that up by fouling Raphinha which, in truth, wrecked Brentford's chances of turning the game round.

Leeds' safety was ensured when Harrison drilled home the winner and, to their credit, Leeds' fans remained in the stands as they sang their songs of survival.

Attempt saved. Raphinha (Leeds United) left footed shot from outside the box is saved in the bottom right corner. Assisted by Kalvin Phillips.

Shandon Baptiste (Brentford) wins a free kick in the defensive half.

Attempt missed. Raphinha (Leeds United) left footed shot from the right side of the box is too high.

Attempt saved. Mateusz Klich (Leeds United) left footed shot from outside the box is saved in the centre of the goal. Assisted by Rodrigo.

Attempt missed. Ivan Toney (Brentford) header from the centre of the box is close, but misses to the left. Assisted by Christian Eriksen following a set piece situation.

Kalvin Phillips (Leeds United) is shown the yellow card for a bad foul.