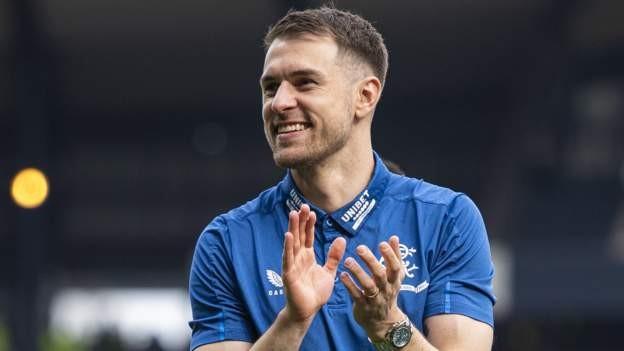 Rangers might be "one game away from making history" but emotions are under control for Wednesday's Europa League final, says midfielder Aaron Ramsey.

Speaking as the squad left for the game in Seville against Eintracht Frankfurt, the Wales player, 31, said: "There's a lot of energy around the place.

"Just looking forward to it, you're one game away from making history.

"It's a great group, a very level-headed squad, so there are no issues about anybody getting carried away."

The former Arsenal playmaker has been in and out of the team because of injury since joining on loan from Juventus at the end of January.

He missed both legs of the semi-final against RB Leipzig because of a hamstring problem but started two of Rangers' final three league matches.

What can you remember about Rangers' European run?When Eintracht's greatest XI was humbled at HampdenPick your Rangers XI for Europa League final

Having sat out the 2019 final through injury when Arsenal lost to Chelsea in Baku, he is keen to be involved this time.

"It's definitely right up there, to play in a final in a European competition," he said.

"They don't come around very often. Unfortunately I missed the Arsenal one a few years back, hopefully I can make up for it in this one.

"There's a lot of excitement around the club. We've put ourselves in an unbelievable position.

"We've produced some memorable results and performances throughout this campaign and now there's just one step further and we're there."

Rangers have already seen off Bundesliga sides Borussia Dortmund and Leipzig, along with Red Star Belgrade and Braga, in the knockout phase of the tournament.

"It's obviously very difficult to reach this stage, you need a bit of luck along the way but some of our performances have been brilliant," said Ramsey.

"There is a lot of quality in this squad. I'm not surprised with what we've done and how we've gone about it.

"Now it's about one more big effort to try and come away with the trophy."

Ramsey has a year left on his Juventus contract and says he will put all thoughts of his future on hold until the end of the season, which finishes with the Scottish Cup final against Hearts on Saturday.

"There is no update on that yet," he said.

"I'm just looking forward to the final few weeks here and hopefully making it a very memorable experience for me."