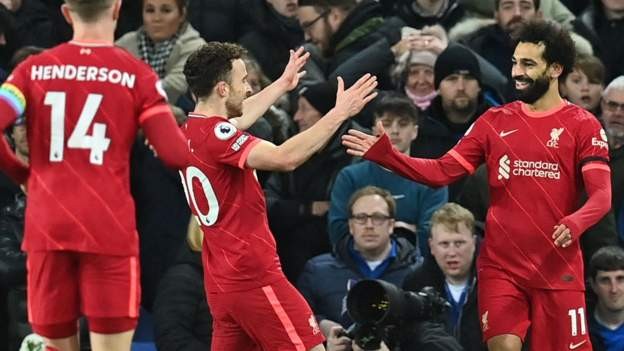 Liverpool increased the scrutiny on former manager Rafael Benitez as they cruised to an easy Merseyside derby win over Everton at Goodison Park.

Jurgen Klopp's side had won only once on their previous nine visits to Everton but a blistering start put them in cruise control as Jordan Henderson scored with a composed finish after nine minutes before setting Mohamed Salah clear to beat Jordan Pickford 10 minutes later.

Everton, having been outclassed for the first half, gave themselves hope when Demarai Gray ran onto Richarlison's pass to beat Alisson seven minutes before the break.

Liverpool were still the team possessing all the quality and threat and they killed the game off when Salah cashed in on Seamus Coleman's error to race clear and expertly score after 64 minutes.

With the mood inside Goodison Park turning mutinous - there were loud protests at the final whistle - Diogo Jota piled on the pain for Benitez and Everton when he took Andrew Robertson's pass in his stride before escaping the attentions of Allan to fire high past Pickford with 11 minutes left.

Everton v Liverpool as it happened, plus reaction and analysisGet all of the latest news from the Toffees hereGo straight to the best Liverpool content

Everton are now eight games without a win and the manner in which they were picked apart here only increased the mutinous atmosphere around Goodison Park, where frustrated fans unfurled a banner on the Gwladys Street End in the first half criticising the club's hierarchy and followed up with further heavy criticism at the final whistle.

When the formalities of this defeat were concluded there were chants of "sack the board", with chairman Bill Kenwright and director of football Marcel Brands particular targets.

In the eye of the storm stands Benitez, an unpopular appointment with many Everton fans given his Liverpool links as the manager who won the Champions League and the FA Cup while at Anfield.

Benitez was the lightning rod as Liverpool fans goaded their Everton counterparts with ironic chants for their former manager, including "Rafa's at the wheel."

Everton fans held up a banner during the game calling on the club to live up to it's club motto of "nil satis nisi optimum," a Latin phrase which means "nothing but the best is good enough"

After a bright start which won favour with many sceptics, Everton have gone into rapid decline, not helped by injuries to key defender Yerry Mina and, in particular, England striker Dominic Calvert-Lewin.

They were brutally exposed by a rampant Liverpool here as they floored a panic-stricken Everton early on before killing the game off when Benitez's side threatened a recovery.

There will be speculation about Benitez's future but Everton's mess is more than his making and this was a very painful night for their supporters.

Everton owner Farhad Moshiri can be volatile when it comes to decision-making but a series of managerial changes have had no effect. Irrespective, Benitez now faces a crucial home game against Arsenal next Monday.

Liverpool were in a different class to Everton, and despite a few uncomfortable moments after Gray's goal they never looked like leaving without all three points.

In taking Everton apart, they set a new record of scoring two or more goals in 18 successive games, and but for Everton goalkeeper Jordan Pickford they could have scored a lot more.

Liverpool simply had too much quality and firepower for Everton, who were on the back foot from the first minute and were fortunate to survive until the ninth minute, when Henderson put Klopp's side ahead.

And, at the heart of it all once more was Salah, with two outstanding finishes laced with pace, composure and technique as he scored superbly from Henderson's pass and then took advantage of Coleman's moment of panic, induced by his presence, to roll in his second.

Liverpool have now scored 43 league goals this season, more than any other side in Europe's big five leagues and ahead of Bayern Munich, who have scored 42.

This was Liverpool's biggest league win at Everton since they won 5-0 in November 1982 and they could so easily have scored more, missing early chances then taking their foot off the pedal when they went 3-1 up.

It was another imperious display, full of menace and Everton simply could not cope, showing once again that Liverpool will be serious Premier League title contenders this season.

And with Chelsea and Manchester City also winning on their travels at Watford and Aston Villa, this pursuit looks set to be a three-horse race.

Liverpool lie in third place, two points behind Chelsea, but there will be real confidence they can close that gap after another outstanding display.

Anthony Gordon (Everton) wins a free kick in the defensive half.

James Milner (Liverpool) wins a free kick in the defensive half.

Lucas Digne (Everton) wins a free kick in the attacking half.

Virgil van Dijk (Liverpool) is shown the yellow card for a bad foul.

Anthony Gordon (Everton) wins a free kick in the attacking half.