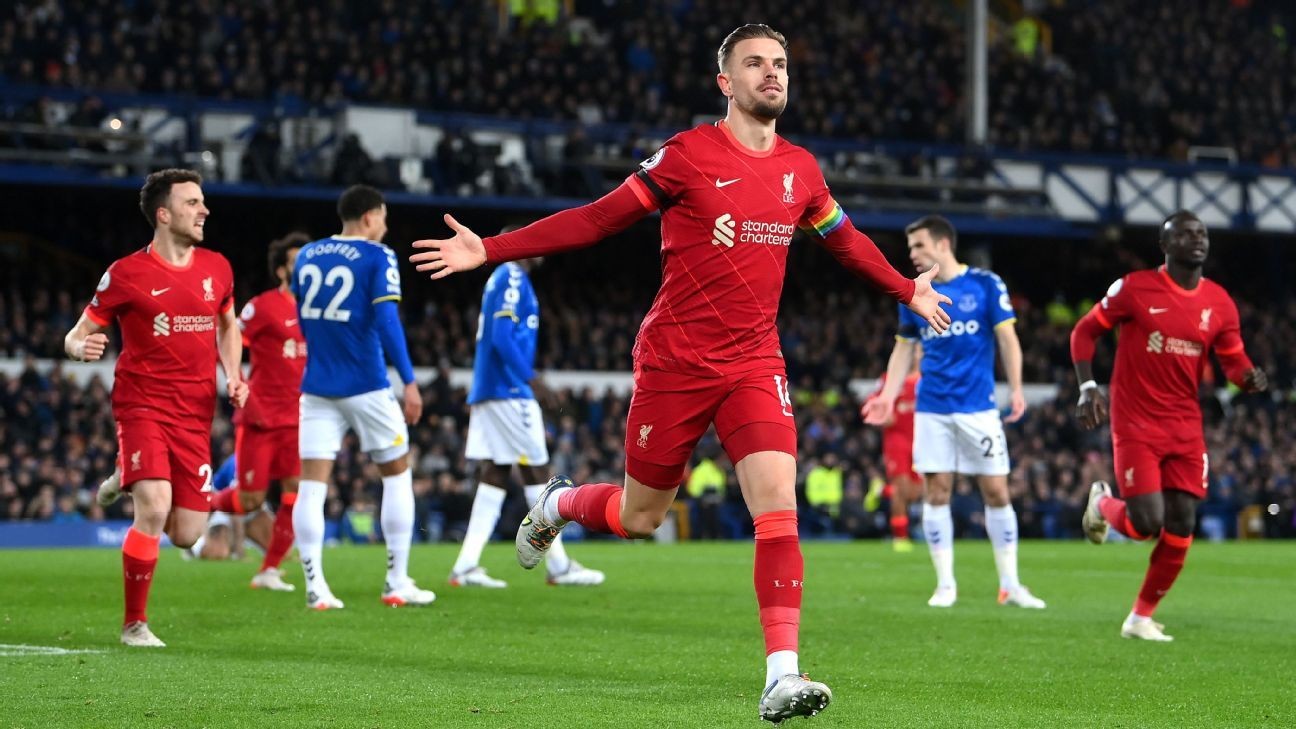 LIVERPOOL, England -- It was brutal in the end, on the pitch and off it in the 239th Merseyside derby, as Liverpool's incredible goal-scoring machine broke another record with a ruthless display of finishing in a 4-1 victory at Everton -- their biggest win at Goodison Park since 1986.

Two Mohamed Salah goals and one apiece from Jordan Henderson and Diogo Jota ensured that Liverpool became the first team in English football history to score two or more goals in 18 successive games. Liverpool have now scored 43 goals in 14 Premier League games this season -- an average of just over three a game -- and sit third in the table having scored 10 more than leaders Chelsea and 14 more than second-place Manchester City.

Jurgen Klopp's side are a formidable, potent outfit and they will dismantle better teams than Everton this season, but when it is your closest rivals that are proving so unstoppable, their class will be no consolation to the Blues.

Grey clouds were already beginning to gather over Goodison prior to this game, with Rafael Benitez's team failing to win in the league since September, but the frustration of Everton's long-suffering fans boiled over into anger at the end of the 90 minutes with hundreds staying behind in the main stand to verbally abuse the club's directors. Chants of "sack the board" were the only ones not laden with expletives.

"I think anyone who could see the game would say we made too many mistakes, and when you do that against a top side you pay for it," Benitez said. "It is always bad to lose but when you lose to a team that has spent so much money and have so many good players, sometimes it is because you make a mistake and the other team is quite good."

Benitez, of course, is the former Liverpool manager who guided the club to their Champions League win in 2005 -- the so-called "Miracle of Istanbul" that assured the Spaniard of legendary status at Anfield.

His appointment as manager at Everton during the summer divided fans and generated outright hostility from some, but Benitez had managed to win the majority over. This was the game that all Evertonians were dreading, however, and their worst fears were confirmed as Liverpool ran riot and goaded the home fans by singing Benitez's name throughout.

They mocked Evertonians with other chants, too. It was an utterly miserable experience for the Blues, who have taken just two points from the last 24 available, but when a team has the upper hand, it is natural for supporters to take advantage. The problem for Everton is that it is now so long since they were in the ascendancy in this rivalry that hope has been replaced by desperation, and it is reflected in the performance of the players in derby games.

Against a team of Liverpool's quality, attempting to win with passion alone is a pointless exercise, and Klopp's players were lying in wait for the same old Everton approach.

"The message from the manager was that they will play physically strong and go 100% for every ball," Salah, who has now scored 19 goals in 19 games this season, said. "We just had to play our game and try to create chances, which we did."

Liverpool were barely tested in an utterly dominant derby win over Everton on Wednesday. Getty

Henderson, who dominated in midfield, opened the scoring by passing a left-foot shot past Jordan Pickford from 20 yards on nine minutes. The England midfielder then turned provider in the 20th minute with a clever pass to Salah, which resulted in the forward breaking into the penalty area before curling a left-foot strike beyond Pickford.

Everton pulled one back when Demarai Gray finished off Richarlison's pass on 38 minutes, but Liverpool were always in control and Salah made the game safe in the 64th when he pounced on a Seamus Coleman mistake before racing the full length of the Everton half and scoring past Pickford. By the time Jota made it 4-1 on 79 minutes -- equalling the winning margin in the Screen Sports Super Cup semifinal at Goodison in September 1986 -- thousands of Everton fans had already left the ground.

This was Liverpool's latest away-day rout. They have already put five past Manchester United, Watford and Porto this season, so Everton were perhaps fortunate to restrict their neighbours to four.

In the Premier League, the goal tally is already worth a point on their rivals in the event of the title race coming down to goal difference, but they are so hard to stop. Salah (10.32), Sadio Mane (8.28) and Jota (7.77) are the top three in the Premier League xG table, but Liverpool are also potent from midfield, as Henderson showed at Goodison.

On this occasion, Liverpool's superiority won the game, but they also kept their heads amid the noise and frenzy of Goodison and that was also crucial.

"I liked what I saw and it was by far the best performance we've done at Goodison," Klopp said. "We made a big step in our development that we can take these kind of games, even though they are really important for the opponent. We can put emotions to the side."

Unlike Everton, Liverpool don't need to rely on emotion to win. They are just too good for that.