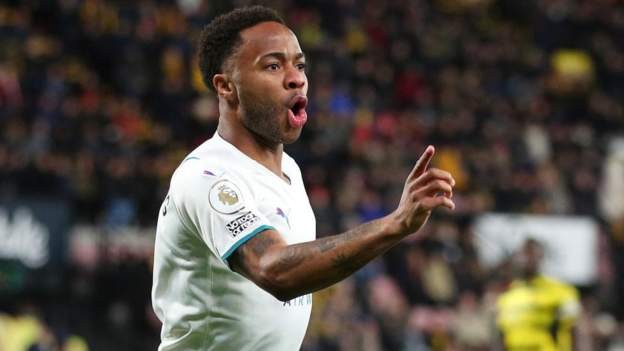 Reigning champions Manchester City moved top of the Premier League for the first time this season with a dominant win over struggling Watford.

Raheem Sterling headed City ahead after only four minutes, when free at the back post to meet Phil Foden's excellent cross from the left.

The hosts were repeatedly ripped apart by City's movement, passing and creativity and only a number of saves from goalkeeper Daniel Bachmann kept the score down to one goal in the first 30 minutes.

But City got a well-deserved second as Bachmann denied Ilkay Gundogan, but the rebound fell to Bernardo Silva, who showed excellent skill to beat two defenders and finish well from a tight angle.

Silva then grabbed his second and City's third, cutting in from the right side of the penalty area and curling a fine finish past Bachmann.

Cucho Hernandez pulled one back for Watford, following in to convert a rebound after his first strike had hit the foot of the post.

After 15 matches, City - title winners in five of the past 10 seasons - are a point ahead of Liverpool.

Chelsea began the day as leaders, but are now a point behind the Reds in third place, after losing 3-2 to fourth-placed West Ham.

Watford v Manchester City as it happened, plus reaction and analysisGo straight to all the best Watford contentVisit our City page

For Watford, this was a sixth defeat in eight matches under Claudio Ranieri, albeit from an incredibly tough run, including encounters against five of the current top seven.

They performed excellently to win 5-2 at Everton and 4-1 against Manchester United in Ole Gunnar Solskjaer's last match in charge of the Red Devils, but have only picked up six points since Ranieri replaced the sacked Xisco Munoz in October.

Ranieri received a hero's reception at Leicester last Sunday in a return to the King Power Stadium where he had led the Foxes to the Premier League title in 2015-16.

But, just as in that match where they lost 4-2, the Hornets' defensive problems were on display and only fine goalkeeping from Bachmann denied City a hatful of first-half goals.

Goalscorer Sterling also had another effort saved, Jack Grealish - back in the starting line-up for the first time in a month after injury - was denied three times and Joao Cancelo fired wide as Watford were outclassed.

After Silva doubled the visitors' lead in the 31st minute it became a question of how many City would score.

Sterling is now on 99 Premier League goals and had a chance to reach his century, but had an effort palmed away by Bachmann, who also fingertipped a Foden drive onto the post.

The chances kept coming for City with Gundogan shooting over, before Silva's second goal - and seventh of the season - came in the 63rd minute.

Grealish also had a strike deflected onto the crossbar, Bachmann saved from Aymeric Laporte, before substitute Hernandez claimed Watford's consolation in the 74th minute.

Attempt missed. Jeremy Ngakia (Watford) right footed shot from outside the box misses to the right. Assisted by Cucho Hernández with a cross following a corner.

Attempt saved. João Cancelo (Manchester City) right footed shot from outside the box is saved in the centre of the goal. Assisted by Kevin De Bruyne.

Craig Cathcart (Watford) is shown the yellow card for a bad foul.

Gabriel Jesus (Manchester City) wins a free kick in the attacking half.

Attempt blocked. Raheem Sterling (Manchester City) right footed shot from the left side of the box is blocked. Assisted by Bernardo Silva.

Kiko Femenía (Watford) wins a free kick in the defensive half.

Attempt missed. Raheem Sterling (Manchester City) right footed shot from outside the box is too high. Assisted by Bernardo Silva.

Attempt missed. Joshua King (Watford) right footed shot from the centre of the box is close, but misses to the right. Assisted by Cucho Hernández with a cross.

Raheem Sterling (Manchester City) wins a free kick in the defensive half.