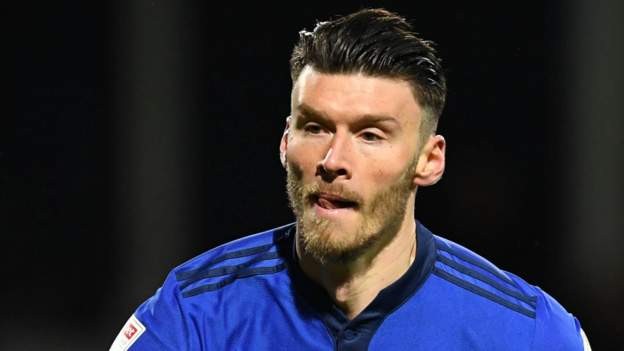 Moore has been linked with Championship promotion hopefuls Bournemouth, but Morison says there have been "no official bids".

Morison says he would like to sign two players before the transfer window closes, with Cardiff keen on re-signing Ryan Giles on loan from Wolves.

However, Morison says it is unlikely Cardiff will sign striker Uche Ikpeazu.

Cardiff's top scorer last season, Moore is said to be attracting interest from elsewhere, but Morison expects him to stay.

"As far as I know he will be here next week. He is not fit or ready to start a game of football," he said of the striker who is currently out with an ankle injury.

"We can't afford to lose anybody. He is a big player for us and I wish we had him available this weekend."

Morison says he wants to sign another forward player, but has ruled out a move for Ikpeazu.

The Middlesbrough forward has been a Cardiff target, with both managers confirming discussions.

"He is not involved with us. I have made it perfectly clear, so that decision rests with the boy and his agent."

However, Morison says Ikpeazu will not be joining his side.

"Yeah he is a player who did well against us previously," Morison said. "We have looked at loads of options, we need help in the group.

"It's not something we are going to be able to do, because they want a permanent deal and we are not in that market.

"It was over very, very quickly. I couldn't believe it. I had a quick chat and within 10 minutes it was all in the press! It was literally a chat which started and ended with nothing happening.

"There's not a lot more to say on it. You're not going to all of a sudden see him come through the door."

"There is no new news (on Giles), We are still waiting on Wolves," Morison added.

"I've been confident on that for 28 days and we are still waiting on Wolves to make the decision. So, I'm holding out.

"I want the player back. But I'm also prepared to go elsewhere if it gets too late in the day.

"There'll be other clubs in for him, no doubt. It's just up to Wolves to give the green light.

"There comes a time when it's too late. So, until it gets to the end of the road then I'll keep waiting for Wolves."