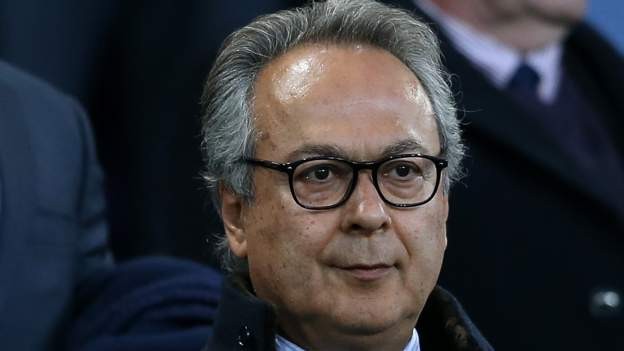 Everton owner Farhad Moshiri says his "commitment remains strong and focused" to the club after "a £100m capital injection" took his stake to 94.1%.

Moshiri has bought more shares in the club which "represents the capitalisation of previous loans".external-link

"I promise you that my determination to deliver for Everton will not waiver," said Moshiri.

Former Liverpool boss Benitez was controversially appointed by the Goodison Park club in the summer but was dismissed with the team 16th in the Premier League.

"It has been a difficult season to date - with results not meeting the expectations of anyone associated with the club," said Moshiri in an open letter to fans.

"As a result, the decision was taken last weekend to part ways with Rafa Benitez as our manager.

"After a very disappointing run of results, it was the right decision for the club - although it is never one that is taken lightly.

"I understand the frustration felt by everybody who loves Everton because of our inconsistent form in recent seasons, despite significant investment in the playing squad."

Moshiri first bought into Goodison Park club in February 2016 and an Everton statement said his most recent investment would progress "plans for the first-team squad and the ongoing development of a new stadium at Bramley-Moore Dock".

"The money that has been spent since 2016, not just on the playing squad but also on key projects including our new stadium, demonstrates my commitment to Everton," said Moshiri.

"I write to you to assure you that my commitment remains strong and focused."

He added: "The strategic football review that is currently ongoing will ensure we have the best model in place moving forward. I am working closely with the chairman and the board as part of that strategic review - and I can assure you the recruitment process for a new manager is aligned to that.

"It is vital we appoint a manager that fits the structure we are putting in place and so, whilst we are keen to make an appointment as quickly as possible, we will work together to ensure it is the right candidate to deliver the success we all crave."