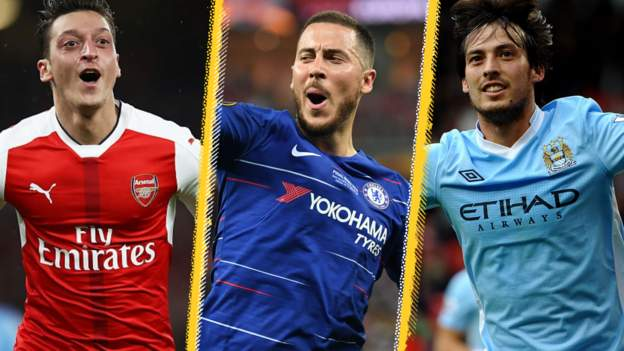 The number 10 role has been played by so many of the greats of the game it makes it one of the most iconic positions in football.

Often playing just behind the striker, they are tasked with creating goalscoring opportunities and there's been many Premier League legends to have made it their own.

Gary Lineker, Alan Shearer and Micah Richards will return in the spring with their latest series of BBC Match of the Day: Top 10, ranking their top 10s from an assortment of topics across the Premier League era.

But we're giving you an early chance to get involved, by letting you pick your top three for each of the upcoming shows, and the trio will get to see your choices before they record the pod for BBC Sounds.

"Part of this chat is going to be about what a number 10 is, because it is difficult to define exactly," Lineker told BBC Sport. "There are lots of players on the list who are definite 10s and others who can play there and did for a while.

"It's an interesting position, and the one everyone wants to play in because you can just mess around a lot of the time. You don't have to make too many runs behind defences, you don't get kicked by defenders, you get plenty of space and you don't have to chase back too much.

"It's the perfect role, really. If I'd been able to pass the ball I would have played there.

"They have always been around, but Peter Beardsley was probably the first number 10 for England and when it happened, at the 1986 World Cup, that was a drastic change by Bobby Robson.

"Normally it was a big striker and a small striker up front - it was Mark Hateley who I played with when I first got into the England team and then, after two games in Mexico, it became Beardsley and me and we just hit it off.

"It helped the whole team because it gave us an extra body in midfield, where previously we had been invariably out-numbered by continental teams with better technique. All of a sudden we had a spare man and it worked. We nearly won the World Cup playing that way in 1990, we were close.

"It helped me too, for purely selfish reasons. Particularly later in my career I used to like playing up front on my own with a number 10 behind me rather than alongside another number nine because it meant there was more space in the box.

"The more bodies you have in the opposition area, the more they will have in there to defend it - therefore there is less space to attack, which is the key to scoring goals.

"So I have always doubted that phrase about how a team needs to 'get more bodies in the box' because when I was a striker I didn't want that to happen. We will talk about all of that as part of the chat, I am sure."

Plenty of Arsenal greats have worn the coveted number 10 shirt and one of the best when at the top of his game in that position was Mesut Ozil.

The German playmaker, a fantastic passer of the ball with great vision, arrived at the Gunners in 2013 from Real Madrid, where he had topped the list of assists for three straight seasons. Such creativity came with a hefty price tag as Arsenal paid a then-club record £42.4m to sign the player.

In his first season he helped Arsenal end a nine-year trophy drought by winning the FA Cup, the first of three while at the Emirates. And in 2015-16 he chipped in with an incredible 19 assists - only Thierry Henry and Kevin de Bruyne have managed more in a single season.

Younger readers may not remember too much about Joe Cole at Chelsea, but he was undoubtedly one of the finest number 10s to have played for the Blues.

Flair, creativity and the ability to create moments of magic, Cole was a player who would get you off your feet whenever he had the ball and that is why he is remembered as a Chelsea legend.

During his seven years at Stamford Bridge he won three Premier League titles, two FA Cups and played in the 2007-08 Champions League final, where Chelsea lost to Manchester United.

Another player who excelled in the number 10 role at Chelsea.

Capable of playing brilliant passes, embarking on defence-splitting runs and scoring spectacular goals, he - like Cole - has a strong case to be lauded as the best player in the playmaker position for the Blues.

He won two Premier League titles, two Europa Leagues, one FA Cup and a League Cup while at Chelsea, scoring 110 goals in 352 games before joining Real Madrid in 2019 for a fee that could rise to 146m euros if add-ons were met.

Wayne Rooney exploded onto the Premier League scene as a 16-year-old at Everton before joining Manchester United in a deal worth £27m.

While he started out with the number eight jersey, Rooney took the number 10 when Ruud van Nistelrooy left United in 2007 and retained it for the next 10 years, although it was in the latter part of his career where he featured more prominently in the deeper role synonymous with the shirt number.

He left Old Trafford in 2017 to re-join Everton for a season, departing Manchester United after 559 games for the club and a record 253 goals.

One of the Arsenal greats and in the number 10 position, Dennis Bergkamp was a sublime player and a key part of a hugely successful era for the Gunners.

Possessing brilliant technique and capable of scoring some incredible goals, the classy Dutchman spent over a decade at Arsenal after joining in 1995 from Inter Milan, winning three Premier League titles and four FA Cups. One of the club's 'Invincibles' in their undefeated 2003-4 league season.

You know a player is a legend if they get a statue in their honour.

A permanent reminder of David Silva's contribution to Manchester City stands outside the Etihad Stadium. The mercurial midfielder made 436 appearances for City, scoring 77 goals. Silva departed in 2020 to return to his native Spain with Real Sociedad, having won numerous collective and individual honours during his time at City.

During his decade at the club he won four Premier League titles, five League Cups and two FA Cups.

Bruno Fernandes has just passed his two-year anniversary at Manchester United and, while he has struggled to find his best form this season, the Portuguese was incredible when he first arrived.

He joined in 2020 from Sporting Lisbon and hit the ground running. In his first season, he scored eight goals in just 14 games to help United into the Champions League places and continued that great scoring form the following campaign with 18 goals in the Premier League and 28 in all competitions.

It could be argued he is not a true number 10, but when he's on it, there are few midfielders who offer as much of a threat as Fernandes.

Philippe Coutinho made an immediate impression on his return to the Premier League with a goal on his Aston Villa debut as they came back from 2-0 down to draw 2-2 against Manchester United.

Managed by his former Liverpool team-mate Steven Gerrard, he will be hoping to replicate the sort of form that he produced at the Anfield club.

The Brazilian was an elite creator as well as having a sharp eye for goal. He was Liverpool's star player in the 2015-16 and 2016-17 seasons, scoring 12 and 14 goals respectively before becoming the second-most expensive player in the world when he joined Barcelona in January 2018.

Not just one of the best-ever midfielders in the Premier League but arguably the world, Paul Scholes was admired by all the greats of the game.

More of a central midfielder than a traditional number 10, he could nevertheless do everything - and more - a player in that position could do. As Barcelona legend Xavi once said:external-link "A spectacular player who has everything. He can play the final pass, he can score, he is strong, he never gets knocked off the ball and he doesn't give possession away."

It is another Chelsea number 10 who features in this list. Juan Mata took up the position and the shirt number when he arrived in 2011 and in his first season helped the Blues to win the Champions League, getting the crucial assist for Didier Drogba to equalise against Bayern Munich before the English side won on penalties.

Mata continued to pull the strings in midfield as Chelsea won the Europa League the following season and his influence was recognised as he was twice named the club's player of the year in 2012 and 2013 before joining Manchester United in 2014.