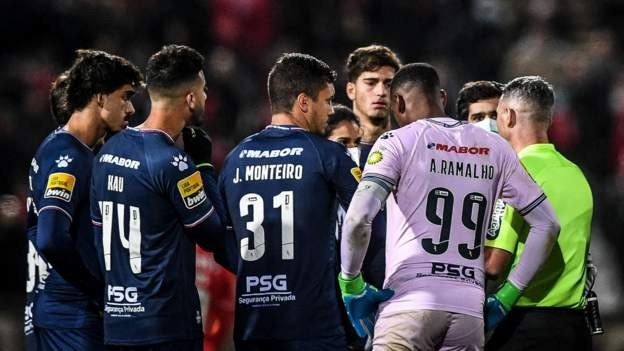 Saturday's match against Benfica was abandoned with Belenenses trailing 7-0

Thirteen players at Portuguese club Belenenses, whose match against Benfica was abandoned in farcical scenes on Saturday, have tested positive for the Covid variant Omicron - accounting for every case currently in the country.

A Covid-19 outbreak meant only nine Belenenses players started against Benfica with the match called off in the second half when injuries reduced their team to six.

It has now been confirmed all 13 players have the Omicron variant, first detected in South Africa last week.

Defender Cafu Phete, one of those to have tested positive, recently returned from South Africa having played for his country during the international break.

How worrying is the new Covid variant?

A Belenenses club spokesperson told Reuters 44 players and staff are self-isolating while most of those infected were asymptomatic or had mild symptoms.

Belenenses had to field goalkeeper Joao Monteiro in defence during Saturday's match because of the absences.

Both Benfica and Belenenses criticised the league and the Directorate-General for Health (DGS) for not calling the game off.

The league, which said it did not receive a formal request to postpone the match, is investigating if the match complied with health rules.

The health authorities said it was not up to them to postpone the game.