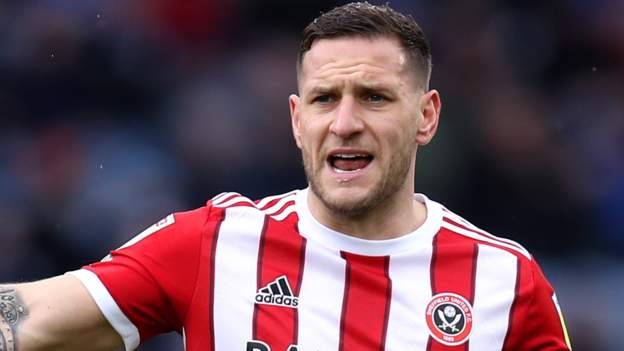 Billy Sharp, who did not feature in the game because of an injury, was standing on the sideline when he was attacked

The Professional Footballers' Association (PFA) has called for a review into matchday security and fan disorder following an assault on Sheffield United captain Billy Sharp.

Television footage showed a fan charge at Sharp during a pitch invasion after the Blades' Championship play-off defeat at Nottingham Forest.

Nottinghamshire Police have arrested a 31-year-old man following the incident.

The PFA said it was "shocked and appalled by the senseless assault".

"There is no place in football for this behaviour," it added. "Our thoughts are with Billy and we hope he recovers quickly."

Sharp, 36, said on Wednesday that "one mindless idiot" had ruined "an unbelievable night of football", as Forest won 3-2 on penalties after the tie ended 3-3 on aggregate.

Blades manager Paul Heckingbottom said the former Forest player required stitches following what he described as a "cowardly" attack - adding that his player "was shook up".

A PFA statement said: "The football pitch is a place of work for our members. This is one of a growing number of incidents this season.

"Matchday security and fan disorder needs to be reviewed ahead of next season, and we will be raising player safety with the clubs, leagues and the UK Football Policing Unit," it added.

"We recognise that stewards and the police have a very difficult job, a suspect has been arrested, and Nottingham Forest have confirmed the offender will be banned for life."

In response to the assault on Sharp, the FA said it would investigate the incident "as a matter of urgency" and work with the clubs and relevant authorities "to ensure the appropriate steps are taken".

Forest said the offending fan would be banned for life.

An 85-year-old Luton Town supporter was left with a head injury after a coin was thrown at him at the end of his club's Championship play-off semi-final match at Huddersfield on Monday.

Huddersfield fans also invaded the pitch on that occasion and West Yorkshire Police confirmed arrests were made at the ground.

In January, the UK's football policing lead told the BBC that football-related arrests across the top five English leagues were at their highest levels in years.

A review into the disorder at Wembley before last summer's Euro 2020 final found "a horde of ticketless, drunken and drugged-up thugs" could have caused death.

Liverpool's equality manager Rishi Jain said fans had "forgotten how to behave" since the Covid-19 lockdowns amid a "huge increase" in offensive and discriminatory behaviour at games.