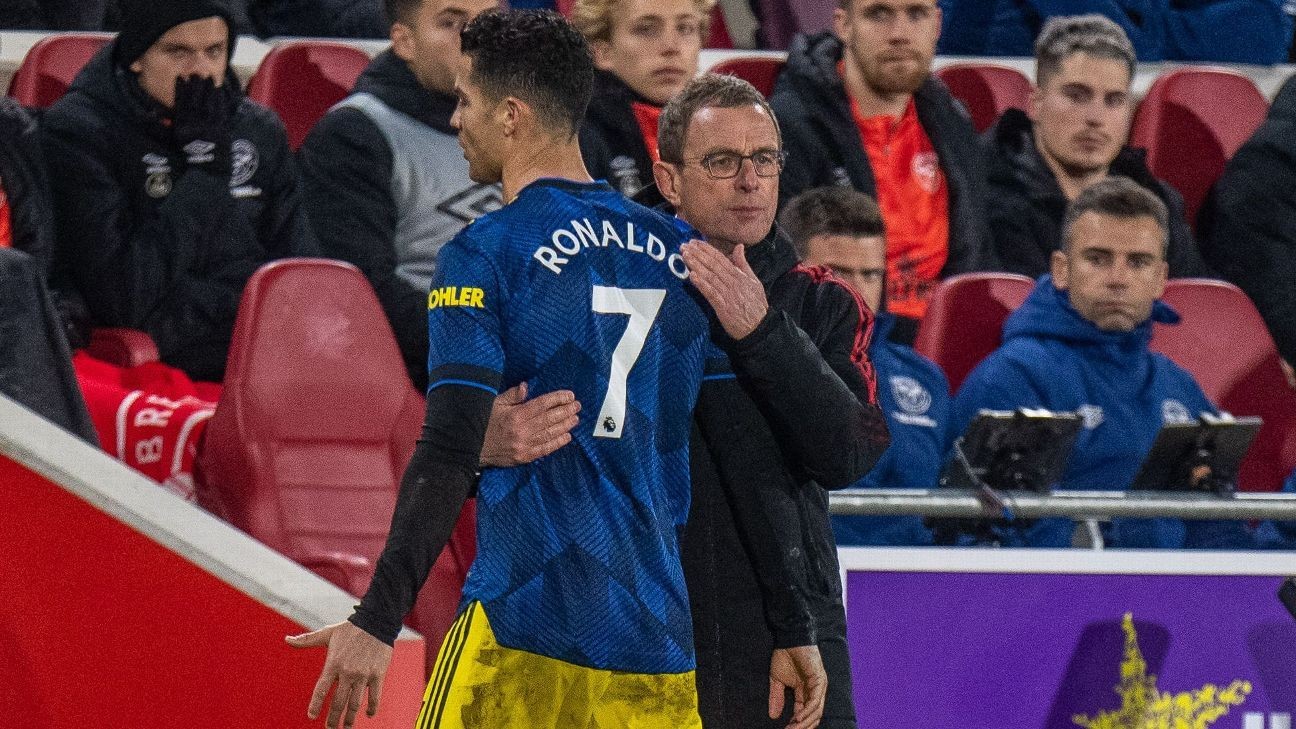 Manchester United interim boss Ralf Rangnick said Cristiano Ronaldo's angry reaction to being substituted "doesn't benefit anyone" but that he does not believe it was an attempt by the striker to challenge his authority.

Ronaldo was visibly upset after coming off during the second half of United's 3-1 win over Brentford on Wednesday.

Rangnick said after the game the reaction was "normal," but speaking at a news conference on Friday, the interim boss accepted it would have been better had the 36-year-old controlled his emotions.

"Obviously any manager I think would wish it shouldn't be too emotional and also in front of the TV cameras," Rangnick said.

"I don't think that this will be for the benefit of anyone, not to his benefit, not to the benefit of the teammates and in the end it's an emotional game and players are being emotional and I didn't take it personally at all."

Rangnick said Ronaldo had asked why he had been the one to come off rather than one of the "younger players."

The German coach said he has no problem with Ronaldo questioning decisions but will continue to substitute the Portugal international if he thinks it is for the good of the team.

"I didn't at all see or interpret that he was challenging me," Rangnick added.

"He just showed maybe too emotionally that he was not happy to be replaced. But, as I said this was not the first time I think if you have a look at the moment when Sir Alex [Ferguson] replaced him or other coaches like [Maurizio] Sarri or whoever in the past his reaction was pretty similar which shows in the end it has got nothing to do with the manager at the time it's about his own ambition and his own desire to stay on the pitch. I don't blame him for that."

Cristiano Ronaldo was visibly upset when he was substituted in the second half vs. Brentford. Sebastian Frej/MB Media/Getty Images

Meanwhile, United are set to look into upping securing around their players after defender Victor Lindelof's home was burgled during the win over Brentford.

Lindelof has returned to Sweden and will not be available for West Ham United's visit to Old Trafford on Saturday, and Rangnick has said the club are considering options to prevent future incidents.

"I think we will have a meeting where the club will speak to the players about what kind of measures can be taken to increase the level of security, what is necessary? Where can the club support the players in those areas?" Rangnick said.

"This is something where the club will speak to the players in the next couple of weeks and hopefully be able to make their houses more safe and secure in the future."