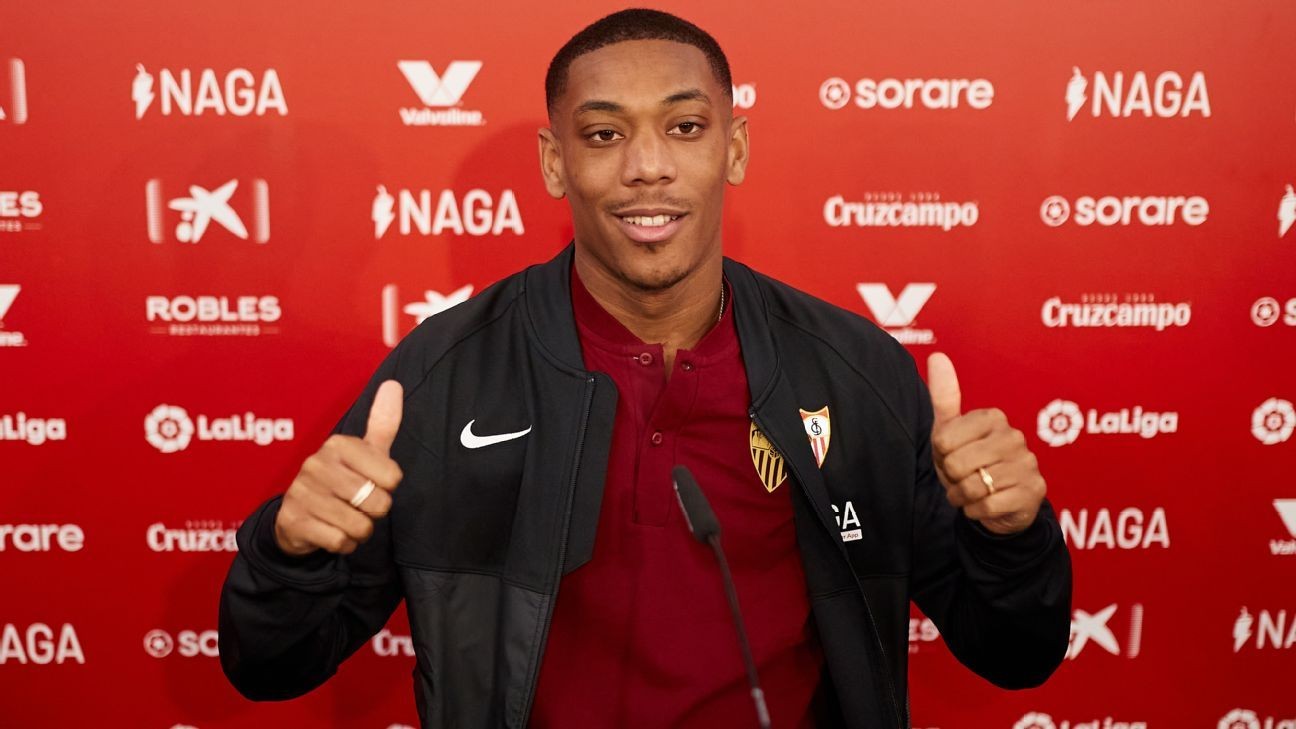 Martial's arrival might not seem significant, but for Sevilla, it means a lot that they are welcoming a player Manchester United didn't want. Fran Santiago/Getty Images

Monchi is off, and four days early. It's Thursday afternoon and his work here is done, or at least he hopes it is. This, after all, is the man who the club captain Ivan Rakitic says is "on twenty-four hours a day, as if this was his family." And so, although he should know better really, Sevilla's sporting director grins at the screen. "I want to go on holiday as soon as this call is over so if there here are no signings while we're talking, it's finished," he says, laughing. "Look, you never know: for as long as it's open, anything can happen. But our idea is that the market is over."

And with that, it ends. And something else starts, something bigger. Bigger, maybe, than anything any of them can remember.

The market has been busier for Sevilla than usual; it's been busier for Sevilla than most others, too. For all the noise around many clubs -- noise that will continue until midnight on Monday, when the January window closes -- not many clubs have got as much done as they have, and nor will they. None have declared their dealings done before the deadline. Oscar and Oussama Idrissi have left. "Jesus "Tecatito" Corona arrived. And then Anthony Martial arrived from Manchester United, welcomed by his boyhood idol (original) Ronaldo, suddenly appearing on the giant screen at the Ramon Sanchez Pizjuan.

"Maybe for the past few years, he hasn't been able to enjoy himself much with Manchester United; hopefully he can enjoy that with us," Rakitic said the following day. "It is really important to have someone like him; not to put pressure on but if we can enjoy having a player like him, he can be important for us."

He already had been, in fact. So Rakitic reckons. "We know about the strength of the Premier League and it's a dream for a lot of players [to go there], but Sevilla have grown, and that [growth] is seen in Martial joining us," the Croatian midfielder insisted. "For Diego Carlos and others this is a big opportunity to see Martial come here. Players don't need to leave to be at a big club. They're at a big club already. This is a club that can compete for everything."

And maybe that was the thing.

Maybe? Emotionally, certainly. It wasn't so much what had happened that was so striking, the focus of conversation during a conference call with Sevilla set up by LaLiga yesterday. It was what had not happened, what now would not happen. It was that even the signing of Martial -- a player that Monchi had followed for years, the striker that they hope can give them the goals they have sometimes lacked, that step up in quality, that name even -- ending up being framed as much as a way of keeping a player as getting one.

It was precisely that Monchi declared the window closed. With Diego Carlos still a member of Sevilla's first-team squad. Just as the summer window had closed with Jules Kounde still there.

"Seven or eight years ago, that wouldn't have happened," Rakitic admitted. Seven or eight months ago, it might not have happened either, not in the case of Diego Carlos. Newcastle had come with money and intent. He had his head turned. It was a lot of money, for him and for the club. "The offer was very important," in Monchi's words, but also "insufficient." And so Sevilla said no. Definitively. There are four days left in the window, but there is no more dealing to be done. The only way Newcastle could sign him now if to unilaterally pay his buy-out clause of €70m, which no-one is anticipating.

"The last call was three days ago, and we judged the negotiation to be closed and over. I don't foresee it reopening," Monchi said.

Sevilla's model involves letting players go; it normalises departures, removes the drama of them, and makes a virtue of players leaving to supposedly better things. Even the fans don't get that upset any more. They trust Sevilla, and Monchi, too much for that. They know that when the club lets go of a player, it is because the price is right, that it will be reinvested. That's one thing. But on this occasion, it's not just about the money, it's also about the moment. "It is true that it was maybe not the best time. It's a difficult market to find a replacement," Monchi admitted. "If the offer had come in the summer, things may have been different."

If it had come with them in a different place, too: Sevilla are second in LaLiga, just four points behind Real Madrid.

It might have been fewer. They have drawn their last two games, against Valencia and Celta, and for the pessimistic there was something inevitable about that: a sense that of course they weren't going to win all their games in hand, that they were never actually going to reach the point where they were right up behind Madrid, let alone ahead of them once they had played the same number of games. Somehow, it always felt like they would fall just short -- that they would be good, but not quite good enough.

And yet for the optimistic, Real Madrid's draw vs. Elche last weekend was a sign that this is not done, that there will be more chances, a door left open. Besides, it was a miracle Sevilla were still standing and had reached this point as close as they had, ready to add reinforcements, holding on long enough for help to arrive, the worst over and better to come.

"It's been crazy: we've had lots of injured players, lots of COVID cases," Rakitic said. Sevilla's goalkeeper (Bono) and main striker (Youssef En-Nesryi), who had only just returned from injury, have been at the African Cup of Nations. "We got through with strength, heart and togetherness," he adds. "There were sessions where we were training with eight or nine players."

Monchi, Sevilla's guru of the transfer market, is declaring their January business finished. And with good reason: they now have the squad to really compete at the top of LaLiga. Diego Gonzalez/Getty Images

Either way, it is an opportunity. A chance. A small one perhaps, but it is there. This is a club whose identity in recent years has been to "challenge the status quo," according to the club's general director Jorge Paradela. One, he said, that finds itself in "a really exciting moment, even a defining moment." A club that could yet challenge the status quo more seriously than ever before and perhaps ever again, offered a unique chance that may not be back. A one-off opportunity not to be passed up. Sevilla is a club with a Europa League final at its own ground and that, who knows, could compete for the league. For the first time in 75 years, and for the second time ever.

And here's the thing: maybe they know it, even if they won't say it, not in so many words. No-one at Sevilla will publicly declare we want to win the league. No-one ever does for some reason. As if that's too much pressure, a jinx, a lack of respect perhaps, fate tempted. Yet the idea lingers a little, inside and out. You can hear it. Sort of.

"Consolidating second place is extremely hard; then we can look up, but with our feet on the ground," Monchi said. The word "ambition" keeps reappearing, a sense of opportunity. And Lopetegui is a coach, he said, who had everyone, everywhere on alert, permanently.

"[Being so close] can be a source of motivation, but you don't have to speak too much; you have to work. When it comes to dreaming and talking, the fans are there for that," Rakitic said. "People across the city say 'let's go for it,' or 'we have to catch Madrid' and we have to take motivation from that. We have to enjoy it, keep going and then maybe see in May where we are. We have to show everyone: here we are. You know that we can't make mistakes if you want to be at the top. Every week we get stronger and now we are where we are."

Where all of them are, which is the point.

It is not what Sevilla say, it is what they have done -- on the pitch and off it. The fact that Martial has arrived on loan for just five months says something. No option to buy, no long-term plan, just a short-term mission. His arrival is a message, a declaration of intent. To everyone, inside and out. Then there is not just what they have done, but what they have not done, not this time: an even greater, more determined statement is not selling Diego Carlos, keeping him here. There's a reason for that, and it is not just financial. It is football.

His departure would have read like a renouncement, a handing over of any chance they had to win the league. Even if it wasn't, even if his absence could have been overcome, a replacement found, it would have felt like that. Like they were giving up -- which may in itself have made it so. Had he gone, it would have been like that was it, the extent of their ambition, like they were settling for second -- or worse. Our challenge ends here. It's over.

But Diego Carlos didn't go, the only thing that's gone is the window. Martial and Tecatito came, the Brazilian didn't go and Monchi declared the market closed, four days early. His work is done; now it's their turn.