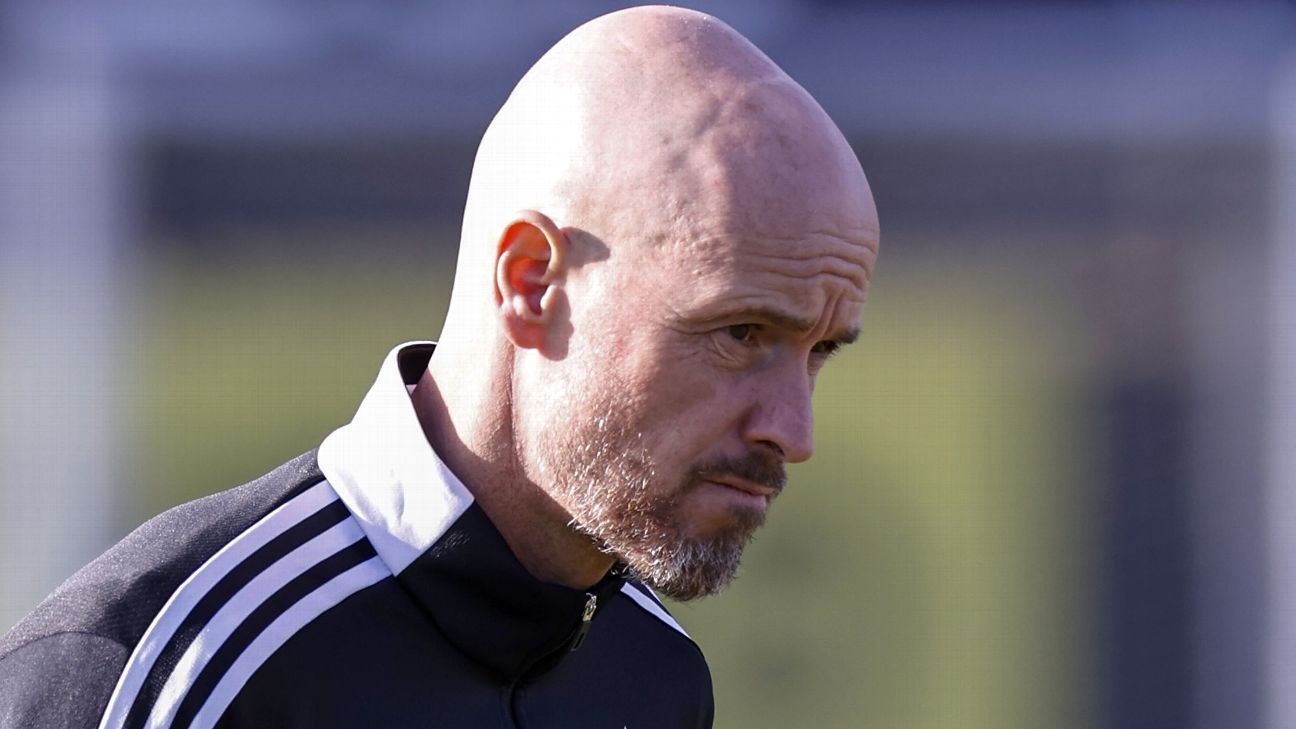 Erik ten Hag was always facing a tough start to his role as Manchester United manager, but it's unlikely that the former Ajax coach would have expected to start preseason training with a squad weaker than the one which posted the club's worst-ever Premier League season last term.

But as the 52-year-old and his players (minus United's internationals) got down to business on the first day of training at Carrington on Monday, Ten Hag was already playing catch-up with rivals including Manchester City, Liverpool, Tottenham Hotspur and Arsenal due to the club's failure to add a single new signing so far this summer.

United have seen five players leave as out-of-contract free agents so far this summer -- Paul Pogba, Juan Mata, Edinson Cavani, Jesse Lingard and Nemanja Matic -- but no money has been raised by offloading other unwanted players. While sources have told ESPN that a deal for Barcelona's Frenkie de Jong is progressing, United have been down the road before of spending weeks on a fruitless chase for a player before ending up with somebody else.

But even if United accelerate their transfer dealings and get everything done before their opening game of the season against Brighton & Hove Albion at Old Trafford on Aug. 7, they have still wasted crucial time in delivering the stability and certainty that Ten Hag and his team undoubtedly need going into the 2022-23 campaign.

Among the Premier League's so-called Big Six, only Chelsea have been similarly inactive in the transfer market to date. But at least the Londners, who finished as runners-up in both domestic cups last season, can cite the major disruption of the club being sold by Roman Abramovich to a consortium led by LA Dodgers co-owner Todd Boehly as a significant factor in their lack of recruitment so far.

Reigning champions City have been as impressive and decisive off the pitch as on it by beating the world's biggest clubs to the £52 million signing of Erling Haaland from Borussia Dortmund and they are close to sealing a deal worth up to £50m for Kalvin Phillips. Leeds United's England midfielder is regarded by Pep Guardiola as the long-term replacement for Fernandinho, who left the Etihad as a free agent.

Liverpool have also been quick to build on the success of last season -- two domestic cups and near-misses in the Premier League and Champions League -- by completing a deal which could ultimately rise to £85m for Benfica forward Darwin Nunez. Fabio Carvalho (£8m from Fulham) and Calvin Ramsay (£6.5m from Aberdeen) have also been added to Jurgen Klopp's squad, which has seen significant departures from Sadio Mane (£35m to Bayern Munich) and Divock Origi, who is close to a free transfer move to AC Milan.

Spurs, with coach Antonio Conte demanding an ambitious summer recruitment programme ahead of their Champions League return, have made an impressive start to their business by adding midfielder Yves Bissouma from Brighton and winger Ivan Perisic from Inter Milan, as well as back-up goalkeeper Fraser Forster. And even Arsenal, who have generally been as indecisive and wasteful as United in the transfer market in recent years, have added new faces to Mikel Arteta's squad with the £34m signing of Porto's Fabio Vieira and a £5.5m deal for United States goalkeeper Matt Turner from the New England Revolution.

Further down the Premier League table, Aston Villa, Newcastle United and West Ham United have also made big statements of intent in the transfer market, but getting deals done early is not just about appeasing supporters and ensuring a regular stream of positive news from the club, it is also crucial in terms of planning on and off the pitch.

Every coach would want all new signings to be in place before the start of preseason, with the unwanted players already moved on, because preseason is when they have the time and space to implement new ideas and assimilate new signings without the distraction of competitive fixtures. New tactics can be tried out on the training pitch and in warm-up games and players have the time to gel with new teammates and build up an understanding. And while summer tours all over the globe can be punishing in terms of travel and fatigue, the value of being away in camp for 2-3 weeks means that relationships can be forged before the real action starts in August.

Completing transfer business early also matters for players off the pitch. While fans often only see what a player does on the field, that is only a small fraction of their time at the club and moving into a new house, finding a school for the children, adjusting to a new language -- even learning to drive on the other side of the road -- all take time and energy and it suits everyone for those issues to be addressed in the summer. Most clubs attempt to take care of most off-field concerns for new signings, but there are always complications and resolving them properly is important. Being asked to get all of the above sorted in mid-August, when the season has kicked off and the player is training and travelling to games while his family are having to adjust in a new city, club and country is a tall order and doesn't lend itself to a successful outcome.

City, Liverpool, Spurs and Arsenal have all given their summer signings the chance to find their feet gradually by getting deals done early. The coaching staff can also get to know their new player and tailor a training programme to suit their needs. But United, and Chelsea, have already seen a valuable month pass by without a player being signed and the clock is ticking.

United fly to Thailand on July 8 for the start of their preseason tour and it will be non-stop for months ahead from the moment they check-in for the journey to Bangkok. And by failing to get early deals done, United have already made Ten Hag's huge job even harder.