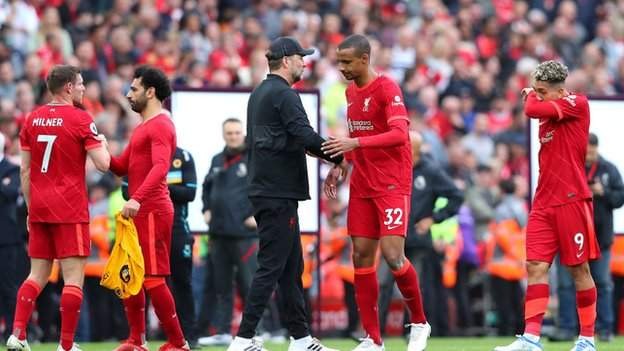 Sadio Mane scored his 22nd goal of the season

Liverpool's hopes of winning a quadruple were ended on the final day of the Premier League season as a tense victory over Wolverhampton Wanderers proved too little to deny Manchester City the title.

The Reds needed to win and hope Manchester City failed to do so, and the unlikely looked to be happening when Pep Guardiola's side found themselves 2-0 down at home to Aston Villa midway through the second half.

That gave hope to Liverpool, who had been dealt an early blow when Pedro Neto drove in from Raul Jimenez's square ball inside the third minute, Sadio Mane slotting in an equaliser 21 minutes later.

At that stage, Jurgen Klopp's side were set to finish level with City on 90 points, with Pep Guardiola's team top because of their superior goal difference.

Liverpool pushed for a winner that looked like it could seal a 20th league title, Mane having an effort correctly ruled out for offside before Trent Alexander-Arnold saw a long-range effort pushed away.

The second goal finally arrived six minutes before full-time when Mohamed Salah bundled in from close range but by then Manchester City had staged an incredible comeback to lead 3-2.

Andy Robertson added a late third for the Reds but there was no late equaliser at Etihad Stadium as Guardiola's side took their sixth Premier League title. Regardless, Anfield applauded their side's efforts at full-time as they came close to an unlikely title.

For Liverpool to have come within six days of the Champions League final with a quadruple still on the table was in itself an incredible achievement.

Klopp's side have already won the League Cup and FA Cup and will hope to add to that collection by becoming European champions for a seventh time when they play Real Madrid in Saturday's final in Paris.

Fans were hopeful but also realistic in the build-up to Sunday's game but they did everything they could to help their side get the win they needed.

The streets around Anfield were a sea of red in the hours before kick-off, with red smoke flares filling the air as the team bus approached.

In the minutes before the game got under way the atmosphere was electric but all the hope and expectation that had been building was quickly deflated by the early Wolves goal.

The disappointment quickly subsided, however, and the supporters soon got back to encouraging their side, playing their part by relaying the score from Manchester City's game with roars of encouragement.

From then on the game was a rollercoaster of emotions with the fans - and no doubt the players - at various points experiencing hope, frustration and belief as they knew just one goal could give them the title.

But although Liverpool did as they have done many times this season and found a way to win, City did likewise as they scored three goals in five minutes to take matters out of the Reds' hands.

Mohamed Salah (Liverpool) wins a free kick in the attacking half.

Attempt blocked. Mohamed Salah (Liverpool) left footed shot from the centre of the box is blocked. Assisted by Trent Alexander-Arnold.

Attempt blocked. Mohamed Salah (Liverpool) left footed shot from the centre of the box is blocked. Assisted by Trent Alexander-Arnold.

Attempt blocked. Joel Matip (Liverpool) header from the centre of the box is blocked. Assisted by Trent Alexander-Arnold with a cross.

Attempt blocked. Luis Díaz (Liverpool) right footed shot from the centre of the box is blocked. Assisted by Trent Alexander-Arnold.

Attempt blocked. Roberto Firmino (Liverpool) right footed shot from the left side of the box is blocked. Assisted by Luis Díaz.

Attempt blocked. Mohamed Salah (Liverpool) left footed shot from the right side of the box is blocked. Assisted by Sadio Mané.

Attempt saved. Mohamed Salah (Liverpool) left footed shot from the right side of the box is saved in the bottom left corner. Assisted by Roberto Firmino.