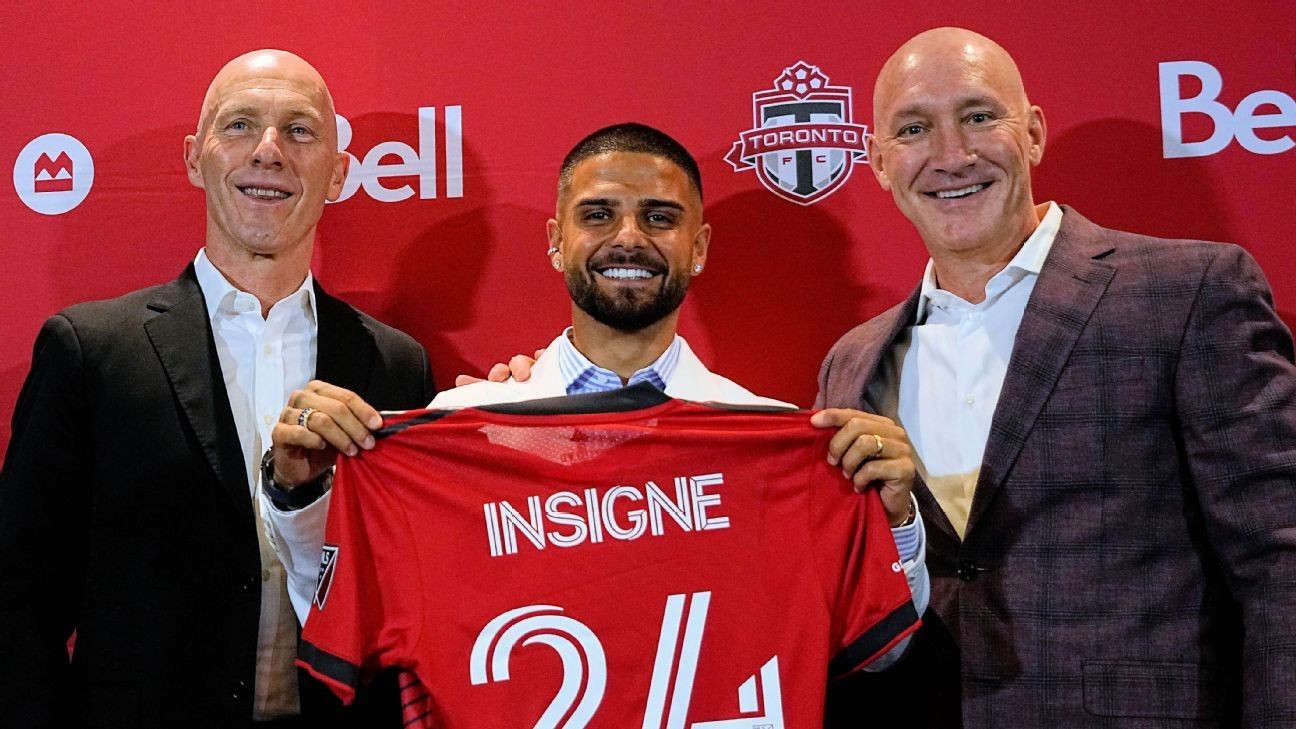 Lorenzo Insigne will be the highest-paid player in MLS after joining Toronto FC. USA Today Images

Lorenzo Insigne may be viewed as one of Major League Soccer's most significant signings but the Italy international shrugged off the notion that he was under any pressure when Toronto FC introduced their prize recruit on Monday.

MLS has seen a flurry of big name signings in recent months, including Wales international Gareth Bale, who joined LAFC on Monday after his departure from LaLiga champions Real Madrid.

But it is Toronto FC's ability to secure a talent like Insigne, 31, in his prime that is being recognised as a watershed moment for MLS as it tries to shrug off a reputation as a well-paid final stop for international players in the downside of their careers.

"The minute we signed Lorenzo our profile was raised," said Toronto FC president Bill Manning. "We're seeing interest in our club from abroad in some ways like we've never seen it before.

"We've had a number of good players sign with this club but no one of this magnitude.

"We have a lot of ambition at our club and we're really looking over these next four or five years for Lorenzo to be a foundational piece."

Landing someone of Insigne's quality does not come cheap, with Toronto fending off several European clubs for the Napoli captain's services and luring him to North America with a four-year deal worth a reported $15 million a season.

With Insigne becoming MLS' highest paid player, Toronto and its fans will expect a return on that investment, as will the league as it looks to attract more players of his quality.

If Insigne was feeling any pressure it did not show as the Italian, wearing a crisp white jacket and sparkling diamond ear studs, breezed onto the stage to face the Canadian media for the first time.

"I played for 10 years for Napoli and the Italian national team. I won the Euro Cup (European Championship), so I don't have any problem being under pressure," Insigne told reporters through an interpreter. "I would rather have my actions speak for me on the pitch.

"I made the decision not for the money but to find a new life for family and my kids."

Insigne signed with Toronto in January and, after seeing out his contract with Napoli, will play his first game with the Canadian club at home on July 9 against the San Jose Earthquakes.

Toronto FC manager Bob Bradley will be hoping Insigne, who won the Coppa Italia twice at Napoli, can add some spark to a side that has lacked consistency, sitting 11th in the 14-team Eastern Conference after 16 games.

"I won a lot with Napoli and I lost as well but I wanted a change and more importantly a challenge," said Insigne, who has played 54 times for Italy. "I want the people to love me and to understand me better with my action on the pitch."