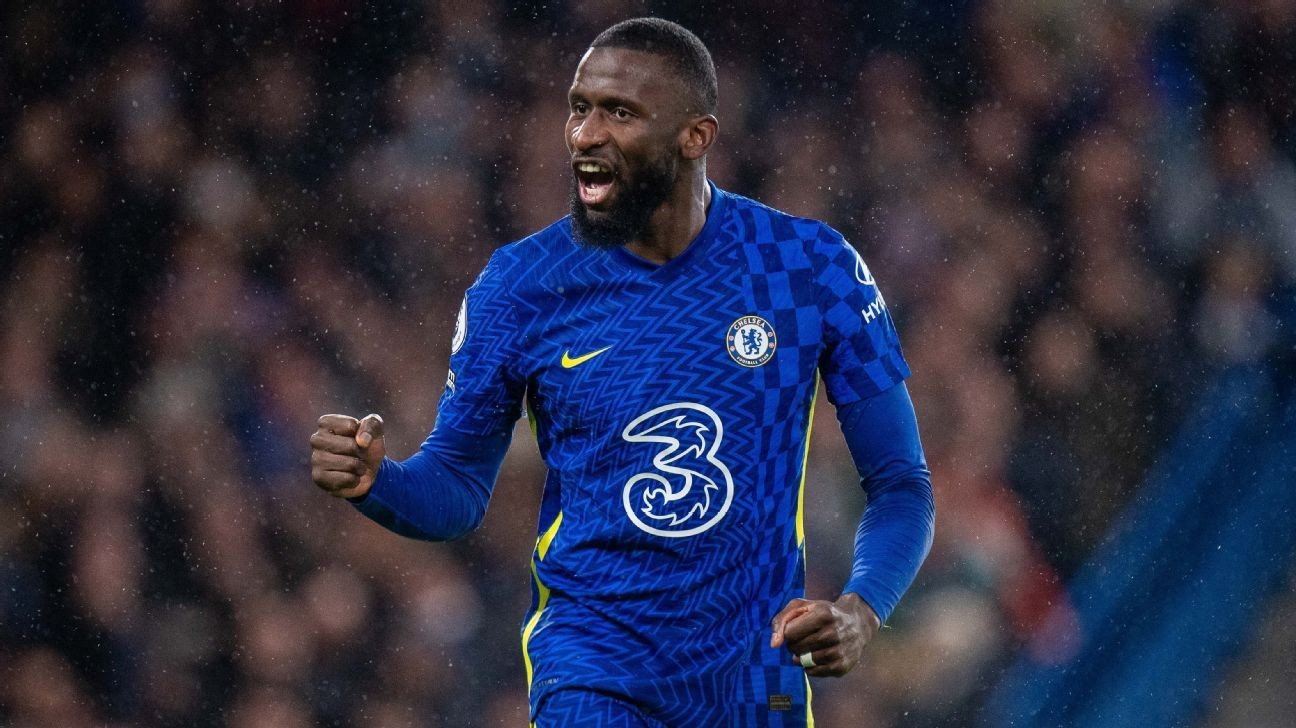 Chelsea defender Antonio Rudiger looks likely to leave the club for free in the summer, as he has been unable to agree a new contract.

Real Madrid, Barcelona and Bayern Munich have all been linked with Rudiger, but Man United could now enter the race, according to Marca, as their interim manager Ralf Rangnick has a "good relationship" with the star's agent Sehr Senesie.

United signed Raphael Varane from Real Madrid for £41 million in the summer to partner club captain Harry Maguire in central defence, so Rudiger would have a fight on his hands to make the first XI if he were to move.

11.51 GMT: Former Chelsea midfielder Oscar says negotiations are ongoing with Barcelona but the club's financial problems are holding up a potential deal.

Oscar, 30, has been playing for Chinese side Shanghai Port since leaving Chelsea in 2017 but is now keen to return to Europe. He says he has held talks with Barca, who are not currently able to register any more signings having exceeded their LaLiga-imposed salary cap for the season.

"Conversations with Barcelona haven't finished, but we have to speak about various issues," Oscar told the Brazilian journalist Marcelo Bechler. "They have a problem registering players, as happened with Dani Alves."

Barca have been able to register Alves as well as fellow new signing Ferran Torres, although only thanks to Philippe Coutinho's loan move to Aston Villa and Samuel Umtiti agreeing to a pay cut.

For any more players to arrive this month, there will need to be further departures at Barcelona, who are allowed to spend 25% of any savings -- be that in freeing up wages or bringing in transfer fees -- until they are back within their spending cap.

Martinez, 29, signed from Arsenal for around £20m in 2020 and equalled the club's Premier League record of 15 clean sheets last season.

He also helped Argentina to win the Copa America in the summer of 2021.

11.14 GMT: Palmeiras wonderkid Endrick is the next big thing to emerge from Brazilian football and in recent days has being linked with Flamengo and several European clubs, including Man City, Barcelona and Real Madrid.

However, popular agent Wagner Ribeiro, who helps the family of the 15-year-old forward, has told ESPN Brasil that Endrick won't move anywhere until at least 2024.

"Endrick is already on the radar of all the big clubs in Europe, however, he won't leave Brazil before 2024. Impossible. I think that Palmeiras do not want to let him go before he turns 18," Ribeiro told ESPN.

Traore, 25, has been linked with a move this month, with Barcelona also interested, but Spurs' previous bid of £15m was not enough.

10.28 GMT: Eden Hazard's Real Madrid teammates believe the out-of-favour forward will stay at the Bernabeu until the summer before taking a decision on his long-term future, sources told ESPN's Alex Kirkland and Rodrigo Faez.

Hazard wants to stay at the club and hasn't given up hope of making an impact this year, with Madrid favourites to land the LaLiga title, having already picked up the first silverware of the season by winning the Spanish Supercopa.

The Belgium international's substantial wages would make a departure this month extremely difficult, sources said. Hazard has made 27 starts in LaLiga in two-and-a-half years in Spain, scoring four league goals.

10.11 GMT: Will Arsenal move on Pierre-Emerick Aubameyang this window?

Gab Marcotti and Julien Laurens debate the best move for Arsenal and Aubameyang with a parting on the horizon.

A second source with knowledge of the discussions added that the proposed transfer fee is comparable to the £5.5m ($7.5m) Manchester City paid for Zack Steffen back in 2019, a deal that potentially reached £7.3m ($10m) with add-ons. MLSSoccer.com first reported the proposed fee for Turner.

If the deal is done, Arsenal anticipate Turner having a "significant role" with club, a key factor ahead of the current New England keeper's expected participation in the 2022 World Cup.

The expectation is that current backup goalkeeper Bernd Leno will depart at some stage, potentially leaving Turner to compete with Aaron Ramsdale for the starting spot.

09.35 GMT: Liverpool centre-back Nathaniel Phillips is on the radar of Watford, says The Evening Standard.

Phillips, 24, is not getting the game time he would want at Anfield and Claudio Ranieri is looking to improve his defence this month.

Antonio Conte was keen to keep a hold of the starting goalkeeper whose contract had entered its final six months this January. The 35-year-old will now remain in North London until the summer of 2024.

08.53 GMT: Dusan Vlahovic is a man in demand, with sources telling ESPN's Mark Ogden that as many as eight of Europe's leading clubs are interested in the Serbia international.

The 21-year-old has scored 20 goals in 24 games for Fiorentina so far this season and has emerged as one of the hottest properties in the game in recent months. Arsenal are reportedly keen on landing the player this month, but an €80m move in January is unlikely and they face competition from Europe's biggest clubs.

Borussia Dortmund's Erling Haaland and Tottenham's Harry Kane are likely to be the most sought-after centre-forwards in the transfer market this summer. Bayern Munich's Robert Lewandowski would potentially be available if the Bundesliga club decide to offload the 33-year-old should he reject the opportunity to extend his contract beyond its June 2023 expiry date. But with several top clubs needing to recruit a centre-forward, sources said that Vlahovic is likely to move to a team that misses out on Haaland and Kane.

Manchester United, Manchester City, Arsenal and Barcelona are all in the market for a striker this summer, with Bayern and Paris Saint-Germain also likely to be in the hunt if Lewandowski and Kylian Mbappe leave the Allianz Arena and Parc des Princes respectively.

Sources said that Atletico Madrid and Juventus are also potential options for Vlahovic, although the deep-rooted rivalry between Juve and Fiorentina could prove problematic even if Juventus are able to fund a bid for the former Partizan Belgrade striker.

08.30 GMT: Manchester United are out of the race to sign Erling Haaland, sources told ESPN's Mark Ogden, with the club ready to focus on alternative attacking options having been made aware the Borussia Dortmund forward favours a summer move to Real Madrid.

Haaland, 21, is expected to leave Dortmund at the end of the season due to a €75m release clause becoming active in his contract at the Bundesliga club this summer.

United failed to sign Haaland from FC Salzburg when he moved to Dortmund in January 2020, despite the club maintaining a long standing interest dating back to his emergence as a 16-year-old at Molde in Norway. Sources told ESPN that senior figures at Old Trafford believe that Haaland is destined for Real this summer and that United are not in a position to convince the player or his advisors to reconsider his options.

With Edinson Cavani out of contract and likely to leave at the end of the season and Cristiano Ronaldo 37 next month, United are focusing on other options to solve their search for a proven goalscorer.

Campana, 21, joined the Premier League side in 2020 but has since spent time on loan in Portugal with Famalicao and at Swiss side Grasshopper, where the Ecuador international scored three goals in 14 league appearances.

"We're excited to acquire a player of Leonardo's pedigree. He's a hungry young forward with a lot of promise, and we're confident we'll be able to develop him and help him reach his full potential with us. He'll add to our attack and give us a great option up front that we believe can score goals in this league," said Inter Miami Chief Soccer Officer and Sporting Director Chris Henderson.

play0:54Could Mbappe stay with PSG for one more year?

Gab Marcotti and Julien Laurens discuss Kylian Mbappe's chances of staying at PSG beyond the end of this season.

- Paris Saint-Germain have made an offer for Tottenham Hotspur midfielder Tanguy Ndombele, reports the Telegraph. PSG's interest in the 25-year-old is part of a potential player exchange deal that includes midfielder Leandro Paredes being sent the other way. Paredes has made just six starts for the Ligue 1 club this season.

- Multiple approaches have been turned down for Malang Sarr, according to Ekrem Konur. Chelsea have dismissed offers from both AS Roma and Leicester City for the 22-year-old defender who has made just eight appearances so far this season. But more offers could soon arise for Sarr, who is also on the shortlist of Everton, Newcastle United and West Ham United.

- MLSSoccer.com's Tom Bogert writes that Leeds United have sent representatives to Austria as they prepare another approach for FC Salzburg and United States midfielder Brenden Aaronson. The Premier League club are keen to get a deal locked up in the current window, but there is resistance from Salzburg who want to keep hold of him until the summer -- recently rejecting a bid of $20m.

- Nicolo Schira reveals that Sardar Azmoun has been offered to AC Milan, with Zenit St Petersburg looking to acquire a fee for him before his contract runs out at the end of the season. The 27-year-old striker has been in impressive form this season, scoring 10 times from 15 starts. And despite talks of negotiations between the Russian club and Lyon, Azmoun could now have other options as his club begin to test the waters around Europe's top leagues.

- Sevilla have turned their attention to Lyon forward Moussa Dembele, according to Marca. The LaLiga club have been searching the market for a frontman throughout January, and with little progress made in a deal for Manchester United's Anthony Martial, they are now considering the option of a loan deal for Dembele. The 25-year-old striker has scored five times this season from 15 appearances.