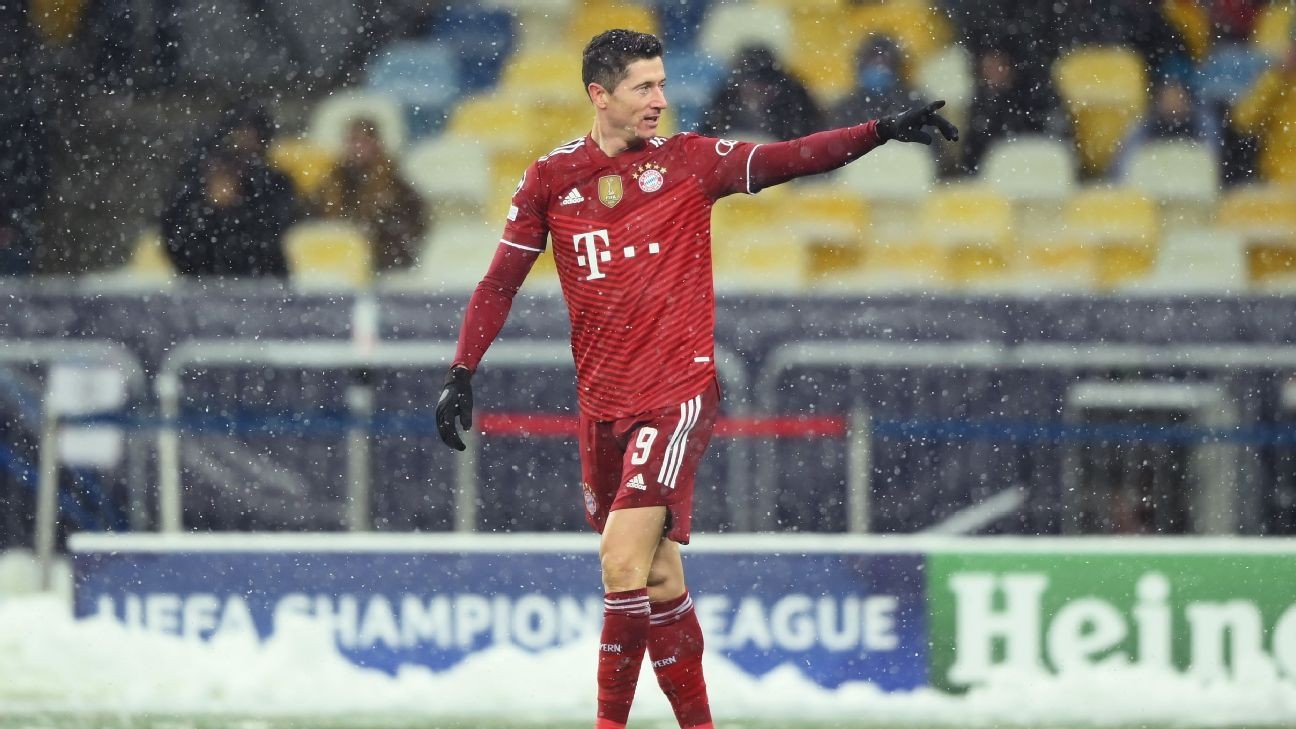 Robert Lewandowski has decided to prioritise a move to Real Madrid as he continues to drift towards the exit doors at Bayern Munich, according to reports in Spain.

Messi vs. Ronaldo: Two superstars, two summer moves. How is it going?22dMark Ogden, Julien LaurensMaguire, Coutinho, Van Dijk: How it started, how it's going for soccer's most expensive XI34dMark OgdenThe biggest star every top Premier League team has traded64dTor-Kristian Karlsen

AS writes that the 33-year-old Poland striker -- ranked No. 1 in the position in ESPN FC 100 -- has informed his agent on a desired transfer to Madrid, with the hopes of heading to the Santiago Bernabeu at the end of the season.

However, the move hinges on where Borussia Dortmund's Erling Haaland (ranked No. 2 in ESPN's list) ends up. Los Blancos are looking to invest heavily next summer, and they have also been linked with Paris Saint-Germain's Kylian Mbappe, though Karim Benzema's stellar form means there is only room for one marquee signing at the striker position.

Lewandowski has remained in sublime form this season, scoring 25 goals in 23 games for Bayern Munich, and narrowly missed out winning the Ballon d'Or, which went to PSG's Lionel Messi.

- Napoli are continuing their search for a left-back and have begun talks with the agent of Besiktas star Umut Meras. That's according to Calciomercato, who writes that the 25-year-old is open to a move to the Serie A, but is remaining focused on Besiktas until an official offer is made.

- Jonathan Ikone is set for a switch to Serie A in January after agreeing on a deal with Fiorentina. Fabrizio Romano writes that Lille will receive a fee of €15 million for the 23-year-old. Ikone has had a mixed campaign after being a standout performer when his side won the Ligue 1 title last season.

- Meanwhile, Lille have set their sights on FC Midtjylland's Gustav Isaksen for a move in the January transfer window, according to Sport Italia TV. The 20-year-old star was a standout performer as his side defeated Braga 3-2 in the Europa League, and he has also impressed while on international duty with the Denmark U21 national team.

- Nicolo Schira reveals that Manchester City have scouted Bologna's Mattias Svanberg, who scored the winner as his side 1-0 victory over AS Roma on Wednesday. The 22-year-old attacking midfielder has been in good form for the Serie A side this season and has previously been linked with Arsenal.

- Barcelona are interested in Las Palmas star Alberto Moleiro, says Mundo Deportivo. The Blaugrana are reported to have been following the 18-year-old for some time with hopes he could be the next Pedri, but the Canaries are planning to make it more difficult for clubs to acquire Moleiro, with plans of tripling his release clause in a new contract extension.

- Zlatan Ibrahimovic has reaffirmed his desire to stay at the San Siro after scoring the opening goal in AC Milan's 3-0 win over Genoa on Wednesday. Speaking after the game, as quoted by Fabrizio Romano, he said: "I'm happy for our manager [Stefano Pioli] but now it's time for me to extend the contract. These guys make me have fun."