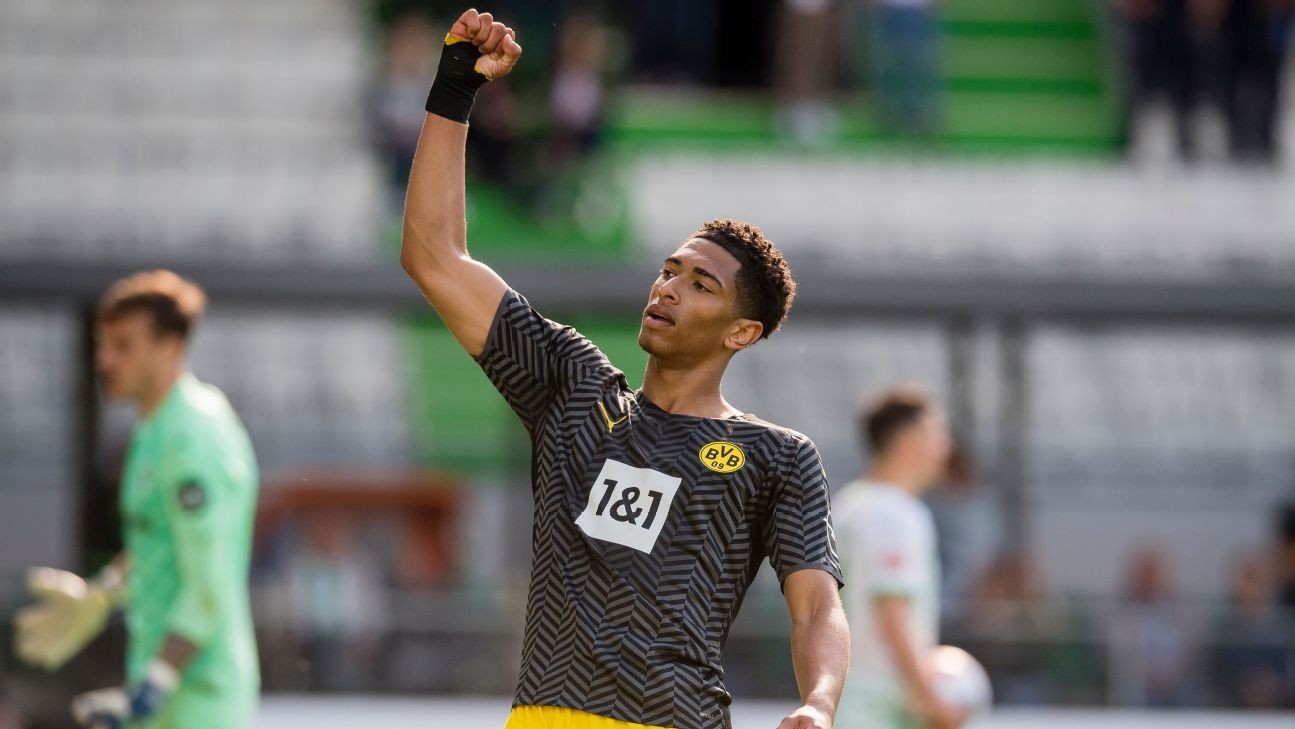 Borussia Dortmund have named their price if they are to part ways with Jude Bellingham this summer, according to BILD, with the Bundesliga side eyeing £103 million for the young England star's transfer.

Is big spending back? What we can expect from the transfer window14dTor-Kristian KarlsenTransfer window preview: Our guide to the biggest deals8dESPNTransfer grades for July 1 deals: Bayern an A for Mane3dJon Molyneux-Carter

Liverpool, Manchester United, and Real Madrid have all been linked with the 19-year-old midfielder, but it is reported that they will need to make a substantial offer to consider moving him on.

Bellingham contributed to 11 goals from 32 Bundesliga starts last season, with his best performances coming from the centre of midfield, and that has seen him on the radars of multiple clubs across Europe.

The England international currently has three years left on his deal at Signal Iduna Park without any release clause, allowing Dortmund manager Edin Terzic to keep hold of his star midfielder who has shown no signs of wanting to orchestrate a move away from Germany's top flight, though it is understood that he would be open to a new challenge if the possibility presented itself.

- Napoli star Kalidou Koulibaly has been escalated to the top of Chelsea's shortlist as Thomas Tuchel looks to acquire a centre-back this summer, understands the Mirror. The 31-year-old will enter the final year of his contract on Thursday, and the Blues are keen to finalise a move quickly to ensure they do not approach the new Premier League season with a shortage in defence. It is reported he would be interested in joining Chelsea, with a fee of around £40m understood to be required.

- Tottenham Hotspur are edging closer to signing Richarlison, reveals Fabrizio Romano. It is reported that they have reached full agreement over personal terms with the 25-year-old Everton forward, and they will soon commence talks that look to finalise over a transfer fee. Richarlison contributed to 15 goals in 30 Premier League appearances last season.

- Chelsea defender Levi Colwill is attracting interest from both Leicester City and Southampton, reports the Guardian. The 19-year-old England U21 international defender enjoyed an impressive campaign last season on loan at Huddersfield Town, and it is reported that he is prepared to leave Stamford Bridge if he can't secure first-team minutes.

- Watford midfielder Moussa Sissoko is expected to sign a two-year deal with Ligue 1 side Nantes on Thursday, writes Foot Mercato. The 32-year-old France international made 36 Premier League appearances last season, but after leaving Toulouse in 2013, he looks set to return to France's top flight amid reports that he passed his medical with Les Canaris on Wednesday.

- Fiorentina are understood to be readying a £7m offer to Leicester City for Dennis Praet, writes Gianluca Di Marzio. The 28-year-old attacking midfielder spent last season on loan in Serie A with Torino, where he made 23 appearances, but after they opted against making his move permanent, the Belgium international could now make a return to Italy's top flight with the Viola, who are also reported to be close to landing Real Madrid striker Luka Jovic.