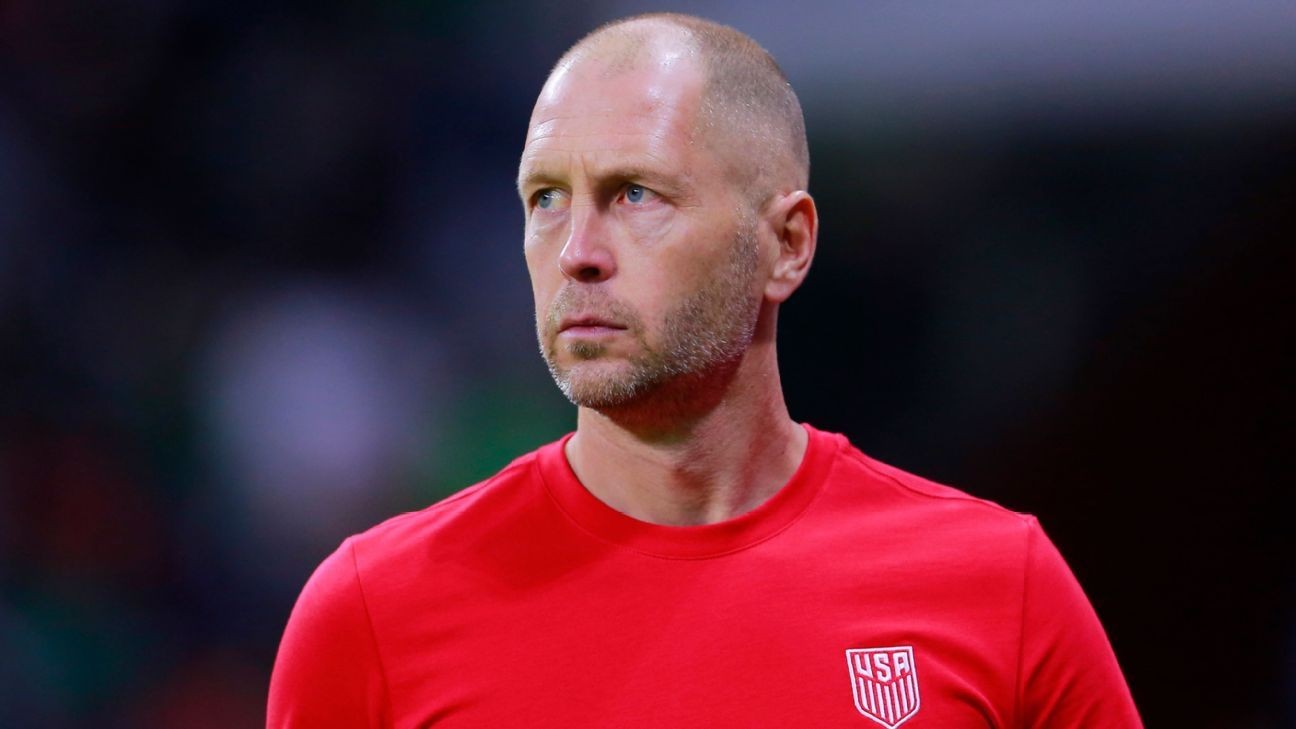 Spend an hour or so on a Zoom call with United States men's national soccer team coach Gregg Berhalter as part of the Gab and Juls Meets podcast and you learn a thing or two.

Some are trivial, like: what's the deal with the three G's in his name? His mom liked the name "Greg" but specifically didn't want anyone to call her son "Gregory." So she chose "Gregg" because nobody was going to call him "Greggory." It just doesn't work.

Or which cuisine -- French or Italian -- he would choose if he could only eat one for the rest of his life. Berhalter, who is a foodie, is torn but plumps for Italian because it's a better option as everyday meals.

"I love the four-hour dinners, the menu degustation, but I can't do it every day," he says. "I know you can enjoy simple French every-day food like baguettes and ham and cheese toasties; I just haven't lived there and haven't developed an appreciation for it."

Some inquiries are decidedly meatier. Like the age-old question that, many years ago, got one of his predecessors, Jurgen Klinsmann, into a little bit of trouble: Can Major League Soccer be counted upon to produce world-class players and keep them at world-class levels? Or is promising U.S. talent better off going abroad? Klinsmann had annoyed MLS owners when he suggested that Clint Dempsey and Michael Bradley would struggle to maintain their level when they left Europe for a return to MLS. Berhalter doesn't duck the question.

"It's a really simple answer," he says. "You go to the highest level you can until you're not challenged anymore. And then you go to the next level. If you keep doing that, you're going to be OK. The issue becomes when you're still challenged at one level and you go to a higher level, then there's going to be problems."

He adds: "I think it's important to note this with some recent transfers from MLS ... they came too early. Think about Bryan Reynolds, who went to Roma [and made just one appearance, before being loaned out to two different Belgian clubs]. Or George Bello [who moved from Atlanta United to Arminia Bielefeld in January and was relegated to the German second tier], there's an argument to be made that he could have stayed in MLS and dominated the league and then moved. So there's a number of guys who I'm concerned are leaving too early.

"MLS is an opportunity for young players to be on the field. And that's valuable. And when they're dominant, when MLS is no longer a challenge, then they can move on. It's no different than Europe. If you're in France and you're killing the French league, you move to the Premier League. It's normal, like a food chain, right?"

Gregg Berhalter's United States squad faces a tough group in the 2022 World Cup, but the head coach is confident in his team's talent. (Photo by Mauricio Salas/Jam Media/Getty Images)

Berhalter concedes that money plays a part and a player has to do what's right for him. If you're making $150,000 a year and you get a million-dollar deal, it's a different equation. And every case is different.

Ricardo Pepi moved from FC Dallas to Augsburg in the German Bundesliga for an MLS-record $20m transfer fee, a few days shy of his 19th birthday. In half a season at Augsburg, he managed just 11 appearances, seven of them as a substitute, while failing to score. The previous year he was voted the MLS Young Player of the Year.

"When he moved, I told him Augsburg is a stable club and that stability is going to help; it's not like Bayern Munich, where there's a ton of pressure," Berhalter says of Pepi. "But now, he's there and he either plays or doesn't play, because the reserve option isn't so strong in Germany, they're like in the fourth division. So that's an issue there, because he needs to look at how he's going to keep developing if he's not on the pitch every day."

- World Cup: All 32 nations who have qualified
- World Cup finals bracket and fixtures schedule
- What you need to know about the 16 World Cup 2026 venues

Coaching a national team is a different animal to working at club level. Outside of major tournaments, you see your players a couple of times a year -- for just a few days at a time -- and the focus, inevitably, is on matches, not training. Like most national-team coaches, Berhalter had only previously worked with club sides, where he had daily interactions with his squad.

"That was the biggest learning curve right there," he says. "When I took the job, I was intent on building a strong culture within the team. And people said you can't do that. I disagree with that, but obviously, from a playing-style standpoint, you have to get back to basics and keep everything really simple, because you have no time to train. That's been one of the biggest things I've learned since taking the job."

Berhalter developed his own hacks to help him do that. His staff shares a Google Doc with all the games that U.S. players -- and potential U.S. players -- are involved in each weekend, sometimes as many as 50 (his last squad alone had players plying their trade in 11 different countries). Each staff member is assigned games -- usually six or seven apiece -- and by Monday night, they have a report.

More than ever before, the American squad is full of young flair, and Berhalter has the opportunity to set the foundation for the 2026 World Cup hosted by the U.S., Mexico and Canada. (Photo by John Dorton/ISI Photos/Getty Images)

"We go through videos with the guys from their games and see what they're doing with their clubs and if it can be integrated with the national team," Berhalter says. "Say, for example, Erik Palmer-Brown at Troyes is playing in a back three and making certain kinds of passes in the buildup, we see how that would fit with us. So [we're] kind of priming them for when they come to camp."

Berhalter has another challenge, which coaches of more established nations do not. Along with Mexico, the United States is a preeminent footballing power in CONCACAF (though both teams finished behind Canada in the last qualifying tournament). Being top dog in your region means having to impose yourself on opponents who often set up shop and look to hit you on the counter. At the World Cup though, the U.S. will be facing better sides, teams who look to take the game to the opposition. Conventional wisdom would suggest you have to set up one way to get to the World Cup and, once there, set up differently.

"First off, even when we're favorites, we still approach the game with a lot of respect for our opponents," he says. "But the main point to me is bringing intensity to every game and still playing the way we want to play. That's the root question: Can we still play the same way? Can we still imposes ourselves on England, like we do on other opponents? That's going to be an interesting question. I'm not exactly there yet with the game plan for that game. But I believe in the talent of our group. So why can't they do the same thing at the World Cup?"

The Futbol Americas crew give credit to Gregg Berhalter and discuss how the USMNT squad are finally playing their part.

The U.S. will likely be the youngest team at Qatar 2022 and, more than at any point in the past, there's a core of young talent playing for major European clubs: Christian Pulisic (23, Chelsea), Brenden Aaronson (21, Leeds United), Timothy Weah (22, Lille), Yunus Musah (19, Valencia), Sergino Dest (21, Barcelona), Weston McKennie (23, Juventus), Tyler Adams (23, Leipzig). And there's 19-year-old Gio Reyna at Borussia Dortmund whom Berhalter has known since he was born thanks to his old travel teammate Claudio Reyna. The list goes on and on, and you can't help but look past 2022 to 2026, when the United States will be hosting the tournament, along with Mexico and Canada, and many of these players will be in their prime or entering their prime.

"It's definitely preparation for 2026," Berhalter says. "But like anything, you need to focus on the next step you're taking; you can't get ahead of yourself. So for us, there's a deep focus on 2022. We want to stay in the moment and focus on the task ahead."

The bigger picture -- hand in hand with 2026 -- is the question of what role the sport is to play in America and whether it can fully conquer the last major holdout in terms of mainstream acceptance. Because while there is a large core of fans who follow the game, whether MLS, the European leagues or Liga MX every week, there is an equally large constituency that only tunes in every four years and a significant one that simply doesn't know and doesn't care.

"I think it's our obligation as national team coaches and players to help grow the game in the United States," Berhalter says. "And if we can create heroes of our players and we can inspire kids to play the game, we've done our job. Even if it's fans who are getting on board for the first time, it's valuable.

"You know, I was thinking about the 1994 World Cup. Kids who watched it are now parents, and their kids are going to be watching in 2026. And I think you're kind of closing the loop on that connection between generations being fans. Once you close that loop, you're starting to create a culture where the parents and the kids are fans. That's how you sustain growth. That's how you really build the sport in America."