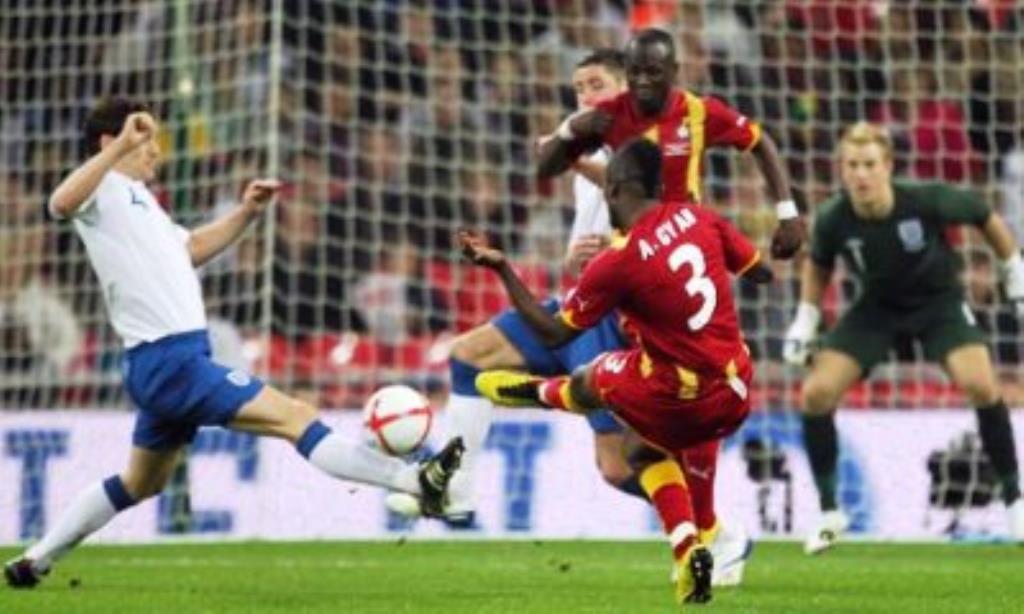 On this day 29 March 2011(Exactly 10 years ago today) Asamoah Gyan's injury-time equaliser deprived England of victory in a highly entertaining friendly against Ghana at Wembley.

It was a historic occasion as Ghana faced England for the first time at senior level.

Andy Carroll scored his first goal for England, but Asamoah Gyan snatched a late leveller for Ghana in a 1-1 draw at Wembley.

With over 21,000 Ghanaians helping to generate a carnival atmosphere, a lively friendly encounter looked to have been settled two minutes before the interval when Liverpool's £35million frontman opened his international account

Gyan, though, was to have the last word as he skipped between a stationary Three Lions back four in stoppage-time to ensure that the visitors left with something to show for their efforts.

Both sides wasted golden opportunities to break the deadlock in the opening 45 minutes, with Dominic Adiyah denied on two occasions by smart stops from Joe Hart and Ashley Young somehow turning the ball onto the crossbar from three yards out.

Carroll made no mistake, though, on 43 minutes as he drilled low into the bottom corner following clever combination play between Young and Aston Villa team-mate Stewart Downing.

Chances continued to come and go at both ends after the interval, with Young seeing a curling effort tipped behind by Richard Kingson and Gyan firing into the side-netting after beating the offside trap.

Matt Jarvis was then given his big moment, with the winger becoming the first Wolves player to represent England since Steve Bull as he came on for the last 20 minutes.

Danny Welbeck became the second England debutant of the night on 81 minutes, ending any hope Ghana had of luring the promising frontman away from the Three Lions.

He would have been confident of ending the game on the winning side as time ticked down, but a moment of individual brilliance from Sunderland striker Gyan in the dying seconds helped the Black Stars to claim a deserved draw.

The friendly no-one wanted turned into the best of its kind since the new Wembley was opened in 2007 - and ended with gleeful Ghana racing to their fans in jubilation following a last-minute leveller.

It was a goal the visitors deserved for their attacking approach and their willingness to play properly, rather than stroke the ball around in half-hearted manner as so often typifies these games.

Their supporters deserved it too. Twenty-one thousand strong and making enough noise to match, even marking Welbeck's England debut with deafening boos given he has rejected the chance to play for them. But it spoiled Carroll's night.

Twenty-four hours after being told to curb his drinking by Fabio Capello, Carroll should have been toasting his first England goal.

A Geordie who plays for Liverpool and wears the England number nine shirt has a pretty formidable legacy to live up to.

And what a start he has made thanks to a pinpoint first-time finish to a well crafted move.

But Ghana were not to be denied, which just made the accepted truth that has grown around England's World Cup campaign even more of a myth.

Aside from the goal that never was in that fateful last-16 tie with Germany, the moment that shaped the Three Lions' time in South Africa actually occurred in a game they did not feature in.

Up until Landon Donovan's stoppage-time strike for the United States against Algeria, England were set for a meeting with Ghana and a direct route through to the semi-finals such was the perceived ease of the draw.

That view underestimated Ghana's abilities somewhat, as they eventually proved.

Despite keeping the same formation that served him so well against Wales, Capello discovered stand-in skipper Gareth Barry did not have as much success in keeping Ghana at arm's length as Scott Parker had done at the Millennium Stadium.

Gyan tested Hart with a thunderous 40-yard drive, then got behind Phil Jagielka but failed to beat the England keeper from rather closer.

Hart nearly gifted the visitors a goal when he presented the ball to Gyan on the edge of the area with a misdirected clearance, only to save himself embarrassment by barring the Sunderland striker's route to goal until reinforcements arrived.

He deserved that bit of fortune, though, having already turned away Adiyiah's goal-bound header with a splendid one-handed reaction save that required agility as well as skill on the basis Hart had been moving in the wrong direction as Sulley Muntari's far-post free-kick arrived.

Yet England were far from outplayed. Despite the pre-match moans about players not here, those who were largely excelled.

Young in particular has enjoyed an excellent year as an England player, even if he will not want to watch any replays of the moment he slid forward to reach James Milner's low cross but turned it onto the bar even though the goal was gaping.

Downing started that move, part of a man-of-the-match display, and the Aston Villa man should have scored himself in the opening minutes when he raced onto Milner's through ball, only to screw his shot badly wide.

Young's fiercely struck effort fizzed over the bar too in those breathless opening stages.

Indeed, as the first half drew to its conclusion, the only English offensive player who had not impressed was Carroll.

Much is expected of the young man with the £35million price tag even though it was only his second international appearance.

But he struggled to get himself in the right place at the right time, moving towards the far post when he should have been at the near and dropping back for a pass when the requirement was to go forward.

As it has always been with strikers, though, the currency by which they are judged is the number of times they find the net.

So, when Young clipped an excellent pass to the edge of the area and Downing prodded the ball straight into his path, Carroll seized on the opening and found the bottom corner with deadly accuracy.

And, as Carroll did little after the break of note until he was replaced by Jermain Defoe just before the hour, that was it.

He left the field to a standing ovation, though - his job done, the aura around him beginning to grow.

The entertainment continued - Young's curling shot just wide at one end, Barry's brave block to a John Pantsil effort at the other, Jonathan Mensah sending a free header from the corner disappointingly wide, a fingertip save from Richard Kingson to deny James Milner, Gyan thrashing a shot into the side-netting.

England were within touching distance of victory when Gyan slalomed through their defence and equalised.

After missing the penalty that would have given Africa its first World Cup semi-finalists nine months ago, no-one can begrudge him that.

0n this day 29 March 1963 (Exactly 58 years ago today)Baba Yara, Ghana's former right winger who was seriously injured in a road accident on 24 March 1963 was flown to London for further treatment at the famous Stoke Mandeville Hospital.

The trip was sponsored by the Central Organisation of Sports.

He was accompanied by Dr R. O. Addai, a surgical specialist from the 37 Military Hospital, where he had been receiving treatment since the accident.

Yara and five other soccer stars, all members of the Republikans Sporting Club, had been admitted to the hospital since the accident.

The stars and other Republikans were returning to Accra from Kpandu after a match, when their bus went into a ditch at Kpeve.

A day before Yara was flown to London, the La Ronde Night Club, one of Accra's popular night clubs, offered to fly Mrs Patience Baba Yara to London to be with her husband.

The managing director of La Ronde, Mr Habib J. Ghanem, who had just returned from a tour of Europe, said he was willing to transfer a free return air ticket to London, which was won by Yara to his wife.

Yara won the prize when he was chosen the best dressed gentleman at a competition organised by the club.

Mr Ghanem who expressed shock at the tragedy said he was also willing to give Mrs Yara twenty five pounds pocket money.

He stated "I am doing this in the hope that Yara may have the comfort of his wife when he is away from home. It is also my fervent prayer that Yara recovers soon. "

Patience described the offer as "wonderful, kind and nice."

She also express her thanks and appreciation to the public for their interest in her husband.

On this day 29 March 1940 (Exactly 81 years ago today) Joe Louis knocked out Johnny Paycheck in round 2 to retain heavyweight boxing title at the Madison Square Garden, NYC

On the this day 29 March 1966 (Exactly 55 years ago today) Muhammad Ali beat George Chuvalo by unanimous decision after 15 rounds to retain the WBC and Lineal heavyweight boxing titles in Toronto, Canada