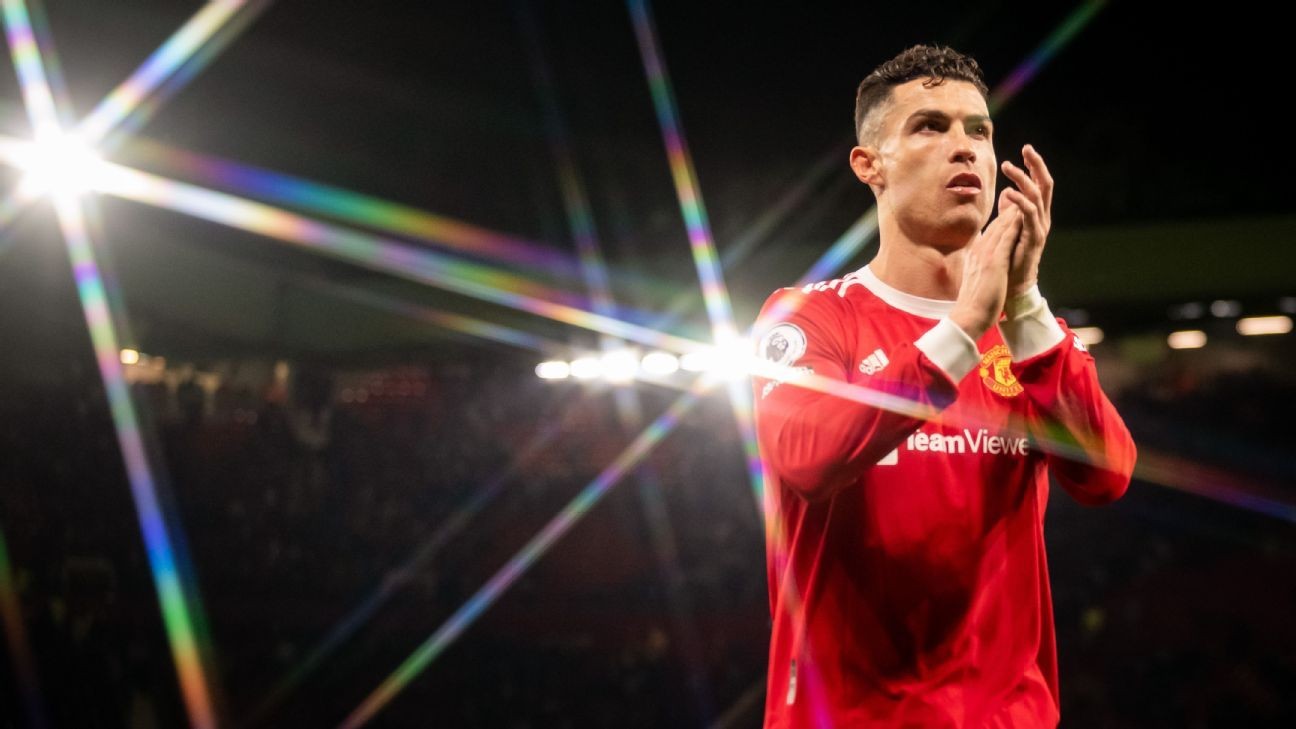 Where would Manchester United be without Cristiano Ronaldo? That question has been posed almost since the day the 37-year-old scored twice on his second Premier League debut for the club during a 4-1 win against Newcastle at Old Trafford last September, following his transfer from Juventus, for an initial €15 million, which saw him return to United, 12 years after leaving in a then-world record £80 million transfer to Real Madrid.

As United prepare to pull down the curtain on their worst season in over 30 years with a trip to Crystal Palace on Sunday -- a season that has seen one manager (Ole Gunnar Solskjaer) fired and interim boss Ralf Rangnick become statistically the club's worst manager since Sir Alex Ferguson retired in 2013 -- Ronaldo will end the campaign as the team's leading goalscorer and perhaps the only player who has produced memorable moments for the right reasons during 2021-22.

In a season blighted by humiliating defeats, early cup exits, and dismal performances by many United players, Ronaldo's double against Newcastle, crucial late goals in the Champions League against Villarreal and Atalanta (twice), and hat-tricks against Tottenham and Norwich have at least highlighted why the club signed him from Juventus last August.

But there is a flip-side to Ronaldo that has legitimately been cited by his detractors. His presence in the team, the argument goes, makes United too predictable, denies the likes of Jadon Sancho and Marcus Rashford the freedom to play to their strengths in the final third and, at 37, he simply does not have the legs to press opposition defenders and play the important role of being his team's first line of defence. As a consequence, United concede too much space and possession to opponents and are therefore more vulnerable to being attacked -- 56 goals conceded in 37 league games underlines that theory.

All of the above are valid observations and, a year after finishing second in the Premier League with 73 goals scored, United are now bracing themselves for a final-day battle with West Ham for the dubious distinction of finishing sixth, and avoiding a place in next season's Europa Conference League, having so far netted just 57 goals this season -- only eight more than their all-time lowest return of 49 goals in a full campaign.

Cristiano Ronaldo's goal contributions have been critical for Manchester United this season, without which the club's record would be dismally poor. Ash Donelon/Manchester United via Getty Images

But are United really enduring one of their worst seasons in living memory because they brought Cristiano Ronaldo back, or has the Portugal captain actually saved them from an even worse campaign simply by scoring the goals to keep them high enough in the table to still have a chance of qualifying for the Europa League?

Statistically at least, Ronaldo has more than justified his presence in the team and his numbers certainly do not point to him being a problem that United can do without.

He has scored 18 Premier League goals in 30 appearances and registered three assists, but with an xG of 17.59 and xA of 2.04, Ronaldo has out-performed both metrics. Some might argue that he has done that at the expense of those around him, but other data discounts that. Ronaldo has a 50% success rate in tackling, better than all of his fellow forwards apart from Anthony Elanga, with Rashford (29.4%), Sancho (28.6), and Edinson Cavani (10) well adrift of Ronaldo's numbers. Elanga also has a rate of 50%.

In terms of ball recoveries, only Sancho (112) has a better rate among the forwards than Ronaldo, who has registered 52. Elanga (49), Rashford (44), and Cavani (22) all have fewer than Ronaldo, albeit from fewer minutes on the pitch.

Ronaldo was obviously not signed by United to win the ball back -- he was recruited to give the team a reliable goalscorer who could make the difference in the penalty box -- but his work-rate off the ball is a significant issue in that he can't be expected to stroll around while others do the work. Nevertheless, his numbers are still better than most of his fellow forwards.

His statistics when out of possession could be better, but he is clearly not abandoning those responsibilities in favour of saving himself for the moments when he can put the ball in the net. But if he was signed to be United's focal point and proven goalscorer, how has he measured up against the Premier League's best? The truth is that he has done well and out-performed the majority of his rivals for the Golden Boot.

Only Mohamed Salah (22) and Heung-Min Son (21) have scored more Premier League goals than Ronaldo this season. He is unlikely to top the charts, but if he scores twice against Palace, it would be an impressive achievement to break the 20-goal barrier at 37 while playing in the worst United team of the Premier League era.

Salah's overall numbers are testament to the Liverpool forward's status as one of the world's top forwards, with the Egypt international also registering 13 assists, from an xA of just 7.33. In terms of xG, though, Salah is slightly under-performing at 23.44.

If United had been told, when he signed, that Ronaldo would out-score Kane and out-perform his own xG and xA, the club would have expected to be on course for a successful season and perhaps win a first trophy since 2017. But unfortunately for United, while Ronaldo has delivered, the majority of his teammates haven't.

So where would United be without Ronaldo? They're not in a great place with him, but it would be so much worse without him.