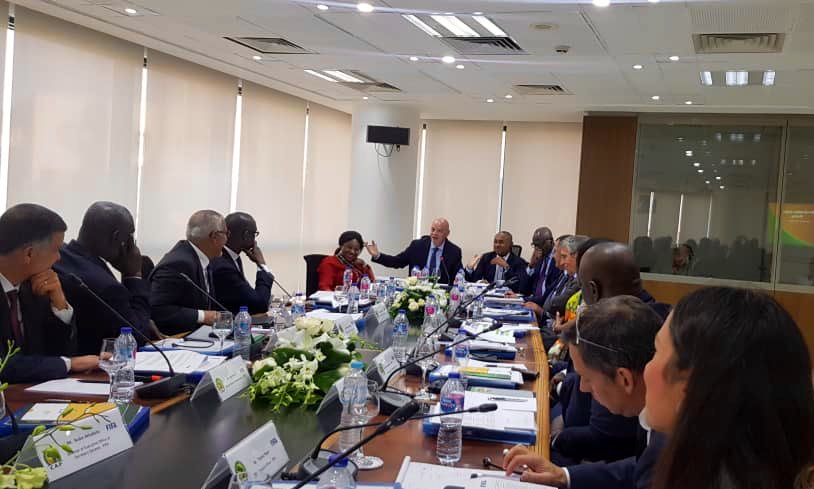 Infantino believes African football will be better with this partnership

Gianni Infantino says Africa football will be 'envied around the world' if the CAF-FIFA partnership to accelerate reforms within Africa football governing body is implemented successfully.

The President of FIFA was speaking in Cairo on Tuesday when he jointly inaugurated the CAF/FIFA Reform taskforce at CAF’s headquarters in the Egyptian capital.

The joint CAF/FIFA Partnership Roadmap covers three main areas: financial management, good governance and effective internal procedures with the support of a group of specialists from FIFA selected for their expertise in key areas.

CAF President Ahmad Ahmad and Infantino jointly inaugurated the group fully made up of Africans with strong experience in football and industry as they seek to fully implement the reforms programme.

CAF President Ahmad took the unprecedented move of seeking FIFA's support to independently assist the reforms process within the confederation in the wake of several allegations of impropriety against the body's leader.

FIFA itself has undergone reforms and looks to be on firmer grounds following the internal changes and Infantino thinks CAF will strongly benefit from the experiences of the world governing body.

“Fifa has come a long way over the past years & we have turned things around for the good of football. We are here to share what we learned and experienced in dealing with crisis situations and to help African football,” FIFA President Infantino said.

"We count on your support, your passion and innovation.”

Ahmad denied any wrongdoing in the wake of the corruption allegations leveled against him insisting only an independent body with experience in reforms like FIFA can help CAF improve its structures and image.

FIFA subsequently announced its Senegalese secretary general Fatma Samoura as the person to lead the reform process on a six-month secondment to help overhaul the African body.

Despite criticism of the move by former FIFA President Sepp Blatter as 'colonialist', Infantino strongly rejected the claim insisting they are offering help based on their experiences and achievements.