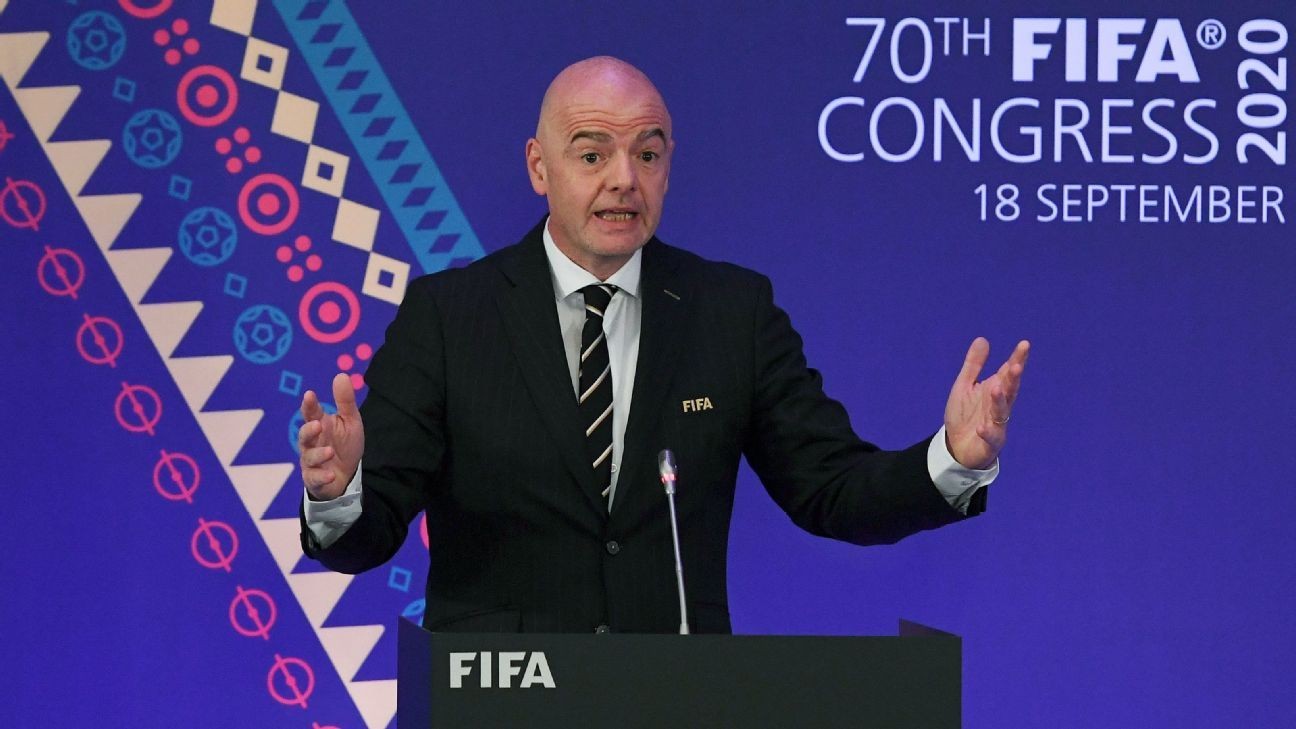 FIFA president Gianni Infantino criticised Italy's Serie A, where Juventus have won the title for the last nine seasons, suggesting that playoff systems could be an alternative to the conventional home-and-away format for national leagues.

"Somebody told me these things sound like the NBA and are not so good for football," Infantino told reporters following Friday's FIFA Congress.

"But I ask you... do we really think the Italian league has been very exciting in the last nine years? What kind of competition is it where 90% of teams want to finish second?

"It's not for the FIFA president to say how football should be played... but it's legitimate to think there are other ways to play competitions."

Infantino also addressed the successive postponements to 2022 World Cup qualifiers caused by the COVID-19 pandemic, saying they are becoming a real problem and a shortening of the format could be a possibility in some cases.

The South American qualifiers, due to start in March, will not get underway until next month, while the start of the CONCACAF tournament, which should have been this month, has been put back until March.

Meanwhile, six matchdays have been postponed in the marathon Asian qualifying competition.

"I am concerned and it's obviously a real problem, especially if the pandemic doesn't stop or let up, or we don't start playing in a normal way," Infantino said. "We are in the hands of the health authorities."

Infantino said that football's world governing body had opened an extra window for international matches in January 2022 and would look at finding room for more, something which could upset European clubs who would have to release their players.

An alternative could be to play three matches instead of two during an international window, or stage qualifiers in a single venue instead of home or away.

He added that the November/December slot for the 2022 World Cup in Qatar at least gave FIFA some breathing space.

Meanwhile, during the congress, Infantino, who is the subject of criminal proceedings in Switzerland, defended himself from forces which he said wanted to drag FIFA into the "darkness of the past."

The Congress, usually a lavish event in which the representatives of FIFA's 211 member associations enjoy first-class travel and luxury hotels, was held by video conference from FIFA headquarters in Zurich due to the COVID-19 pandemic. It lasted around 90 minutes.

The proceedings against Infantino were launched by a special prosecutor looking into meetings that he had with former Swiss Attorney General Michael Lauber.

The AB-BA watchdog, which oversees the Attorney General's office, said that special prosecutor Stefan Keller had found indications of criminal conduct related to their meetings. Infantino and Lauber have denied wrongdoing.

Infantino, elected in 2016 to clean up FIFA after it became embroiled in a scandal, has argued it is perfectly natural for him to meet law enforcement agencies.

"Why was I meeting the Attorney-General? Because it was my duty, my duty as FIFA president, because I want to liberate FIFA from those old toxic values," he said.

"There are still forces who want to drag us back into the darkness of the past... because they don't like reforms and because they want to hide their malpractices, who knows?"

Infantino said he would continue to fight against corruption in football and to co-operate with authorities over the world to help clean up the sport.

"I am more convinced than ever to fight for these values. Those who have made up conspiracy theories will become victims to their own schemes," he said.