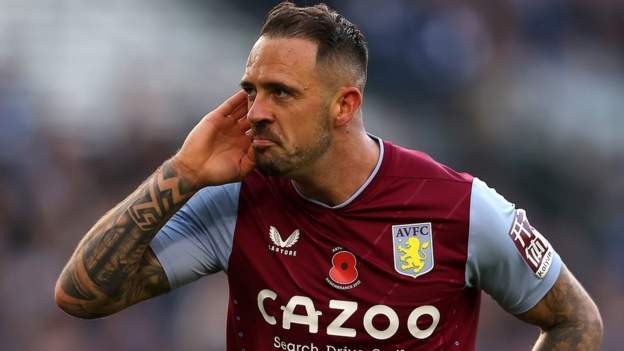 Danny Ings has now scored four goals in as many games after his double against Brighton.

Danny Ings scored twice as Aston Villa beat Brighton for their first Premier League away win of the season.

Alexis Mac Allister put the hosts ahead after just 49 seconds when he took the ball from Douglas Luiz, following a heavy pass from Villa keeper Emiliano Martinez, and slotted in.

It was the fastest Brighton have ever scored in the Premier League.

But Ings levelled from the penalty spot in the 20th minute after Lewis Dunk fouled John McGinn in the box.

Despite the game being relatively open, Villa were better in the final third and they continued to cause problems for Brighton.

Luiz made up for his earlier error when he played a part in his side's 54th-minute winner. He challenged Mac Allister on the edge of the box before pushing the ball into the path of Ings who tucked away a calm finish at the near post.

Despite their bright start and having much of the possession in the game, Brighton did not do enough to trouble Villa keeper Martinez.

Aston Villa have struggled on the road this season, but new manager Unai Emery has already made an impact to change their fortunes.

Villa beat Manchester United at home in his first game in charge and, after a Carabao Cup loss at the Old Trafford side in midweek, they have now picked up that crucial first league away win.

Emery's men also scored two goals, another welcome boost given Villa had scored only three away from home before the trip to Brighton.

It was a battling display, reflected in seven bookings for Villa players from nine in the match.

Emery, whose side next host Liverpool on Boxing Day, will go into the break enthused by what he has seen since replacing Steven Gerrard.

Despite having more than 65 per cent of possession and putting Villa under late pressure, Roberto de Zerbi's side failed to make their dominance count.

Mac Allister's early goal proved nothing more than a consolation and Brighton's recent positive run came to a disappointing end.

They followed up league wins against Chelsea and Wolves by beating leaders Arsenal in the Carabao Cup, but issues which were evident at Molineux last weekend were evident again.

It took a late goal from Pascal Gross to claim the three points at Wolves after defensive errors had left the game in the balance at 2-2.

Brighton had only two shots on target against Villa on Sunday and faltered under pressure to concede the decisive second goal.

The fifth-minute substitution of the injured Adam Lallana also saw them lose a much-needed creative spark.

De Zerbi will now be looking to address issues at both ends of the pitch if Brighton are to maintain their position in the top half of the table.

Attempt missed. Levi Colwill (Brighton and Hove Albion) header from the centre of the box is high and wide to the right. Assisted by Alexis Mac Allister with a cross following a corner.

Attempt blocked. Deniz Undav (Brighton and Hove Albion) right footed shot from the centre of the box is blocked. Assisted by Tariq Lamptey with a cross.

Attempt missed. Ashley Young (Aston Villa) left footed shot from the right side of the box misses to the right following a corner.

Boubacar Kamara (Aston Villa) is shown the yellow card for a bad foul.

Alexis Mac Allister (Brighton and Hove Albion) wins a free kick in the attacking half.

Attempt blocked. Lewis Dunk (Brighton and Hove Albion) left footed shot from the centre of the box is blocked. Assisted by Leandro Trossard with a cross.