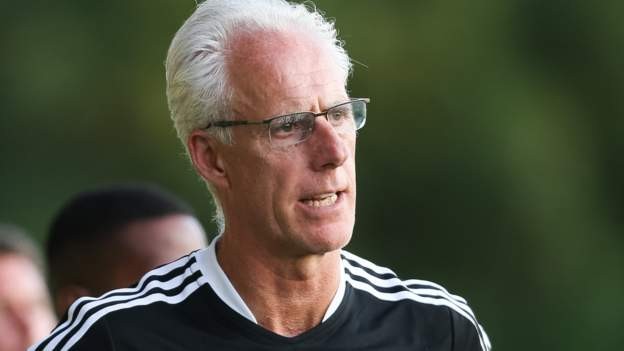 Cardiff City are facing several injury and Covid concerns before their opening game of the Championship season.

Striker Kieffer Moore, his Wales team-mate Rubin Colwill and Leandro Bacuna have yet to return to full training as they recover from coronavirus.

Captain Sean Morrison is recovering from a dislocated elbow, while Curtis Nelson and Josh Murphy have only recently returned from hernia and hamstring issues respectively.

"We'll see but I can't see them all being fit for the first game," manager Mick McCarthy said after Tuesday's 4-0 friendly defeat against Southampton.

"Perry Ng is recovering from Covid - he's still feeling the effects of that.

"Tom Sang, I'm hoping the injection after his toe surgery will work and he'll be available. Sean [Morrison] I think will be involved on Saturday [friendly against Newport County].

"Joel Bagan's playing but he's been out for three months with a dislocated shoulder. Nels [Nelson] only played his second game but I'd expect him to be fit. I can't see Murph [Murphy] being fit.

"Rubin and Kieffer have come back from international duty so they've had a break and then they've got Covid, so they're only just back in training. They're coming back with protocols at 70% so they can't train fully.

"Leo Bacuna went away on international duty [with Curacao], again isolating with Covid.

"So it was going to be a tough game anyway [against Southampton] but, with that list of injuries we've got, it doesn't make it any easier."

Boro manager Neil Warnock was in charge of Cardiff between 2016 and 2019.

"I don't want to sell Browny, I've offered him a new contract and I'd like him to stay," said McCarthy.

"I've spoken to Neil, he's made an offer. Nowhere near enough.

"Browny is in his last year [of his contract]. So if Neil wants to offer something that's anywhere near our valuation, even though the player has only got 12 months to run, then we may have to sell him. We don't want him to go on a free transfer.

"If not, he'll stay here on the contract he's on until the end of the season.

"I expect he will play and continue to play and compete just like he always would."

THE ROAD TO TOKYO: Paralympian Tanni Grey-Thompson charts the road to the 2021SOCIAL MEDIA & SPORT: Vicki Blight investigates the impact of social media in sport