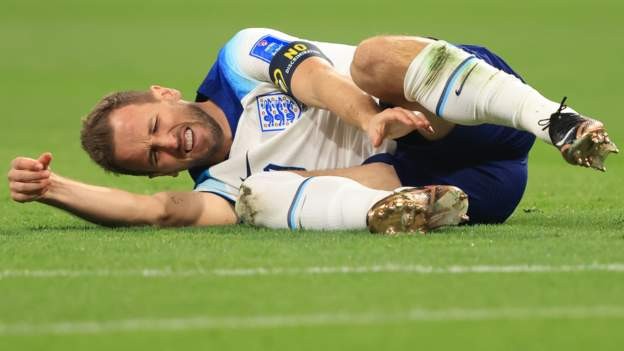 England captain Harry Kane says the "hype and noise" around his injury is similar to when David Beckham and Wayne Rooney suffered their issues before and during previous major tournaments.

Kane sustained a heavy blow to the ankle in the opening 6-2 win over Iran and was taken off after 76 minutes.

The Tottenham striker had a precautionary scan, but then played the whole of the laboured 0-0 draw against the United States.

"Whether or not I am fully fit or injured, someone else can come in - in any position," Kane told BBC Sport.

"The team isn't just me. We have 26 players here who are all looking to achieve the same thing: to win a World Cup."

'Wales will try to beat England with emotion, not tactics'What do Wales and England need to qualify?World Cup Daily podcast: The Wales v England preview

In 2002, England's build-up to the World Cup was overshadowed by news headlines and bulletins about captain Beckham's infamous metatarsal injury.

Just 54 days before the start of the tournament in Japan and South Korea, the midfielder broke a bone in his left foot playing for Manchester United in the Champions League.

But Beckham made a remarkable recovery following treatment in an oxygen tent to lead his side to the quarter-finals, where they were beaten 2-1 by eventual winners Brazil.

Two years later, an 18-year-old Rooney was breaking on to the international stage and was England's star player at Euro 2004, scoring four goals during a run to the last eight.

But, like Beckham, he suffered a broken metatarsal in the quarter-final against Portugal and England eventually lost the match (6-5) on penalties.

"I was an England fan before I was an England player. I know [about] when Rooney got injured, when Beckham had the injury, so I know the hype and noise that can come," Kane added.

"I know and understand why it happens, but from our point of view, we are fully focused on ourselves to go far in the tournament."

England top Group B and will progress to the last 16 in Qatar if they avoid a four-goal defeat by Wales in their final group game on Tuesday (19:00 GMT kick-off).

Kane said: "I feel good. I know there has been a lot of noise. In the Iran game, I could easily have played the full 90 minutes, but the manager changed it for tactical reasons.

"I had a precautionary scan - which is common in our sport - and it came back pretty much all clear. Good to go.

"Physically, I feel good and I will be ready for the game."

'This tournament suits us'

The World Cup in Qatar has been moved to a winter slot for the first time because of the extreme temperatures that can be reached in the country in summer.

It has meant that leagues around the world have been paused midway through the season to accommodate the tournament, with the Premier League stopping just seven days before the opening game.

Just 11 days before the start, Spurs manager Antonio Conte said Kane was "really, really tired" after being replaced in the second half of the Carabao Cup 2-0 loss against Nottingham Forest.

Kane added: "I don't think there will be another major tournament where the players will be at this peak, fitness wise.

"This tournament, the match fitness has been easier than a summer tournament where you have four or five weeks off and have to get back up to match speed.

"This tournament suits a lot of us because we are used to playing every three days at this stage in the season."