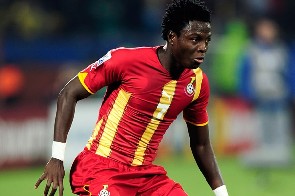 Ghana defender Samuel Inkoom has named in Ukrainian side Dnipro's starting line-up to face Fulham in the Europa League on Thursday.

It is the first time this season that the right-back has been named in the club's starting team.

Ghana midfielder Derek Boateng will also start in the centre of the pitch as he has also been named in the starting team, GHANAsoccernet.com can exclusively reveal

Coach Juande Ramos has been unhappy with Inkoom after he opted out of the club's pre-season to help Ghana's U23 qualify for the All African Games.

Inkoom paid the high price for his commitment to his country as he was made to warm the bench for Dnipro despite him being the first choice player.

But after suffering the consequences of leaving the player out of the starting line-up by getting bad results, Ramos has put his ego aside to play Inkoom.

The right-back is seriously needed if they are to overturn the heavy 3-0 defeat they suffered in the first leg of their clash with Fulham in the Europa League last week.

The 21-year-old was dropped for Dniproâ€™s starting XI this term since he defied the club to play for Ghanaâ€™s U23 side two months ago.

As the first punishment for his insistence on playing for the Black Meteors, he had to take a pay cut by playing for Ghanaâ€™s Olympic team qualify for the All Africa Games.

He even aided the Meteors to eliminate Nigeria by giving US$ 10,000 to his team-mates that boosted them in beating the Dream Team to qualify.