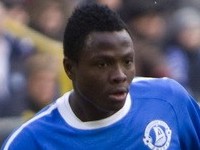 Ghana defender Samuel Inkoom is unfazed about his lack of first team action at Ukrainian side FC Dnipro.

The 21-year-old right-back has been restricted to the substitute bench in Juande Ramos' side.

Many suspect his decision to take a pay cut to help the country's Olympic team qualify for the 2011 Africa Games has come with this punishment.

Inkoom claims he has no regrets for now.

"For me that is my country and so if I'm not allowed to play regularly, it does not worry me at all," Inkoom told Citi FM.

"What I hear is I'm not been made to play because I came to play for my country. Theyâ€™re not saying Iâ€™m not good or anything and so I'm nor perturbed at all. "

Inkoom played in his match for the club this season last Saturday in their 2-1 away win over Vorskla as a second half substitute.

The continuous lack of first team action for Inkoom could affect his chances with the Black Stars with enterprising Daniel Opare playing regularly for Belgian top-flight side Standard Liege.