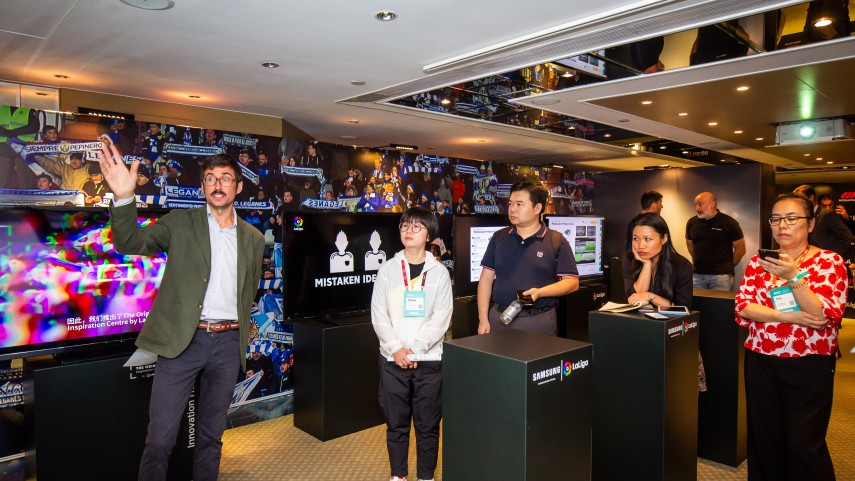 LaLiga presented its transformative technologies of LIVE match broadcasting through an interactive innovation showcase in Hong Kong, coinciding with the RISE 2019 Conference. The showcase was created by LaLiga, together with its production partner Mediapro, a leading group in the European audiovisual sector, and in collaboration with Samsung and Microsoft.

At the event, staged for the second time in Asia, journalists from around the world were shown cutting-edge technologies in football that power LaLiga’s unrivalled broadcast, including artificial intelligence, the technology that makes VAR possible and the evolution of virtual reality. The event was also attended by Joris Evers, Chief Communications Officer of LaLiga, and Minerva Santana, Director of LaLiga Innovation and Global Development.

“At a time when there is much talk about artificial intelligence and machine learning, LaLiga is demonstrating its leadership in football and the sport sector as we start to use these technologies to optimize scheduling of our matches. LaLiga is committed to discovering how the likes of AI and VR can expand viewing experiences of our fans worldwide”, Joris Evers, LaLiga’s Chief Communications Officer, said.

Recent years witnessed LaLiga’s commitment to continuing technology innovation and providing the best viewing experience for football fans in China as well as broader Asian markets. India continues to be a primary market for LaLiga as the game continues to grow in a country of over a billion. In December 2017 over 17,000 fans were present in Delhi for an El Clasico public screening, one of the biggest to date for the league. In addition, LaLiga has continued to bring former stars of the Spanish top-flight to the country, the likes of Gaizka Mendieta, Gianluca Zambrotta, Steve McManaman, Fernando Morientes and Robert Pires have all leant their efforts to grow LaLiga’s outreach in the country.

LaLiga Football Schools in India continue to thrive, over 10,000 students on 35 programmes across 14 cities goes to the show the appetite and success thus far. There have been opportunities for the best students across age groups to train with a LaLiga club. LaLiga remains active across CSR and media outreach opportunities.

And it’s a similar story in South East Asia, especially Indonesia where the love for LaLiga is evident. Over 30 media attended a season launch event in Jakarta for the 2018/19 season, and a crowd close to 10,000 for an El Clasico public viewing taking place in the middle of the night! LaLiga remains active across SEA where the regional headquarters are in Singapore, media and commercial outreach going a long way as the league looks to realize its potential in the region.

LaLiga has partnered the likes of Sports Matters, World Football Summit and Sportel just to name a few of the industry events in SEA, and important area to share our knowledge of the football landscape as well as continuing our learnings in the region.

OptimisingTV viewership and stadium attendance using Artificial Intelligence is the objective of “Calendar Selector.” This new tool used by LaLiga applies machine learning and algorithms to suggest optimal match schedules. The application, located in the Cloud, takes into account historical viewing and attendance data and about 70 additional variables.

Alongside this application, LaLiga has started using “Sunlight” software. This is a complementary technology to the Calendar Selector, which predicts the natural light conditions for each match. This program indicates the areas of sun and shade in the stadium, revealing how the sun will affect the television image, fans and players, and also help with match scheduling. To achieve this, LaLiga uses 3D reconstructions of stadiums.

Another example would be monitoring for events of local significance being held in a city where a match will be played. With this information, the software will find a more suitable date and time for the match.

LaLiga has pioneered (2017) the use of Replay360, the technology that allows you to recreate 3D replays of any move and give viewers around the world a unique perspective from any angle.  38 cameras installed throughout the stadium allow spectators to fly over the action or even position themselves from the point of view of a player. Six LaLiga stadiums in Spain already have this technology, and two more will receive it next season

Together with technology provider EVS and the official producer of the competition Mediapro, LaLiga has shown how the multi-angle review tool Xeebra offers referees the most accurate technology for making decisions on the field. In addition, the built-in artificial intelligence accurately calibrates the playing field to allow the insertion of graphic overlays to support decision making.

Here there are some statistics from LaLiga 2018/19 season:

Penalties: 812 checked / 93 penalties awarded Penalty area incidents: 69 incorrect actions called / 44 corrected by VAR for being clear mistakes Red cards: 32 red cards were shown with VAR recommending it in 7 of these cases. Goals: VAR corrected the referee decision in more than a 6% of the cases (6.10%) of the 983 goals scored during the last season.

VAR also helped in reducing remonstrations from players by 17.3%. Acts of simulation are down from 19 in season 2017/18 to six in the recently concluded campaign.

It also took an average of 83 seconds reviewing decisions via the VAR, up to 129 seconds if the on-field official consulted the pitchside monitor.

LaLiga also uses cutting-edge innovations to provide its clubs with valuable tools aimed at improving the performance of teams and players. Mediacoach is the suite of advanced tools and match analysis services, developed in conjunction with Mediapro, which LaLiga makes available to the coaching staff of all teams in order to analyze in depth the characteristics of the game, before, during, and after each match.

Mediapro's R&D teams, together with LaLiga, are experimenting with Virtual Reality (VR) technology. During this edition of LaLiga's Innovation Showcase, attendees were able to enjoy through the Samsung Gear headset, recaps of the 2018-19 season in 3D (Stereoscopic) virtual reality.

The competition organized by LaLiga and the Global Sports Innovation Center powered by Microsoft, is part of the global agreement signed by LaLiga and Microsoft in 2016. The initiative seeks to boost digital talent and ideas by promoting disruptive solutions that can help LaLiga and its clubs continue to grow in the field of innovation and technology, acting as a gateway into the sports and entertainment world for new companies around the world.

2nd July 2019, the Startup Competition 2019 from The Original Inspiration Centre by LaLiga supported by GSIC has chosen the 10 winners of the first stage of the competition. This initial phase saw a total of 279 companies from 55 different countries and five continents take part.

First launched in 2016, this ground-breaking tool has completely transformed and digitalized the transfer process.

Each team has a template which displays each of their players. When an agreement for any given player has been reached, the selling club removes him from their squad while the buying club adds him to theirs. At this point, further details such as the transfer fee, salary, bonuses or signed copies of the contracts are noted.

Each step taken by the clubs is verified by LaLiga, in first instance by the financial department, which ensures that any given deal abides by Financial Fair Play regulations that each of LaLiga’s clubs have agreed to; and then by another department which checks that the registration is in line with the Spanish Football Federation’s rules.  This process is quick and usually takes 15 minutes, depending on how complicated each case is. LaLiga Manager also allows last minute deals to be made with a fast track approval process.

This kind of software also helps clubs to stay in budget and clearly see just how much they are allowed to spend on new signings and their salaries based on their budget. There’s a very clear line when it comes to salary budgets. If a new signing’s salary will push the club past its salary budget, they will need to let players leave in order for the registration to go through. Beyond simple making transfers more efficient, LaLiga Manager is also being used to improve almost all aspects of league management.